Is This All About Another Trump Phallic Symbol? Trump Tower Moscow to be funded by the Russian Gov Bank Sberbank? Unfortunately it is almost certainly not all but apparently part.

Born in Baku Azerbaijan, Emin Agalarov was married to the President’s daughter. https://en.wikipedia.org/wiki/Emin_Agalarov

Trump’s longtime lawyer Marc Kasowitz is representing Russian Govt owned Sberbank against accusations of corporate raiding, even as he represents Trump in the Russiagate case. Apparently, Sberbank agreed to fund an Agalarov project which might include a Trump Tower in Moscow. Sberbank is also a major owner of KAMAZ, which is a long-time partner to Cummins where US VP Pence’s brother is also VP.

Yesterday the New York Times reported re the Agalarovs of Trump, Jr. email infamy:m”The elder Mr. Agalarov had been talking with Mr. Trump about building a Trump Tower in Moscow as part of a $3 billion real estate project involving hotels, a shopping center and office space.

Sberbank was ready to make it happen…..” Read “A Russian Developer Helps Out the Kremlin on Occasion. Was He a Conduit to Trump?” By NEIL MacFARQUHARJULY 16, 2017 https://www.nytimes.com/2017/07/16/world/europe/aras-agalarov-trump-kremlin.html

Recall that on Jun 3, 2016, Rob Goldstone wrote to Trump, Jr.: “This is obviously very high level and sensitive information but is part of Russia and its government’s support for Mr. Trump – helped along by Aras and Emin” [Agalarov]. 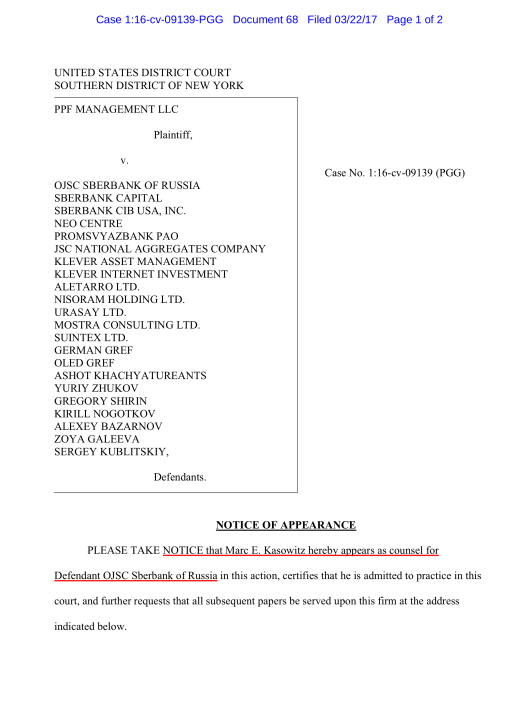 As Reuters explains: “Kasowitz also represents OJSC Sberbank of Russia, the country’s largest bank, which is being accused in a U.S. federal court of conspiring with granite company executives and others to raid the assets of a competitor.” “Trump retains Marc Kasowitz as private attorney for Russia probe: source” MAY 23, 2017 by Julia Edwards Ainsley http://www.reuters.com/article/us-usa-trump-russia-counsel-idUSKBN18J30W

The LA Times reported: “Marc Kasowitz helped Trump through bankruptcy and divorce. Now he’s taking on the biggest case of his career” By Barbara Demick MAY 24, 2017https://www.latimes.com/nation/la-na-kasowitz-20170524-story,amp.html

According to the above 7-16-17 New York Times article, Robert DeNiro and the Agalarovs are partners in 2 Nobu restaurants in Moscow. Interestingly, Trump lawyer and now Russian gov owned Sberbank lawyer Kasowitz (or other members of his firm) has also represented DeNiro: https://en.wikipedia.org/wiki/Kasowitz_Benson_Torres DeNiro’s Nobu restuarant was opened in Crocus City: https://themoscowtimes.com/articles/stars-celebs-and-moscows-second-nobu-restaurant-50769 See too: https://en.wikipedia.org/wiki/Emin_Agalarov

US Congress Resolution of Inquiry includes demand for any info linking Sberbank to Trump: https://miningawareness.wordpress.com/2017/07/16/resolution-of-inquiry-to-follow-trump-money-trail-introduced-by-democratic-members-of-the-us-congress/

On Jun 3, 2016, Rob Goldstone wrote to Trump, Jr.:
“The Crown prosecutor of Russia met with his father Aras [Agalarov] this morning and in their meeting offered to provide the Trump campaign with some official documents and information that would incriminate Hillary and her dealings with Russia and would be very useful to your father. This is obviously very high level and sensitive information but is part of Russia and its government’s support for Mr. Trump – helped along by Aras and Emin [Agalarov]. What do you think is the best way to handle this information and would you be able to speak to Emin about it directly? I can also send this info to your father via Rhona, but it is ultra sensitive so wanted to send to you first. Best Rob Goldstone” Read more here: https://miningawareness.wordpress.com/2017/07/12/russian-cyberattacks-are-act-of-war-trump-jr-is-a-traitor/

KAMAZ is a longtime partner of Cummins where US VP Pence’s brother is a VP. KAMAZ is part of Rostec State Corporation, one of a handful of Russian companies which are directly owned by the Russian Federation and who answer more directly to Putin than some Russian state owned entities: “State Corporations are not obliged to submit to public authorities documents accounting for activities (except for a number of documents submitted to the Russian government) and, as a rule, are subordinate not to the government, but to the Russian president,…” https://en.wikipedia.org/wiki/State-owned_enterprise#Russia “ https://en.wikipedia.org/wiki/State_corporation_(Russia) KAMAZ makes trucks and diesel engines and has over half of the market share of Russian trucks. https://fr.wikipedia.org/wiki/Rostec#KAMAZ The market share is 56% as of 2016, according to their web site.

Rostec and Sberbank are entities with sanctions against them though the sanctions are weak and apparently wouldn’t make Kasowitz’ work a violation. For Cummins KAMAZ there appears a percentage ownership loophole: https://www.treasury.gov/resource-center/sanctions/OFAC-Enforcement/Pages/20140912.aspx However, Kasowitz and Cummins are in clear violation of the idea supposedly behind these poorly written half-hearted sanctions against Russia for invading and taking over Crimea.

Bizarrely ProPublica sees Kasowitz’ alleged alcoholism as a problem rather than that he has been hired by a Russian government owned bank – Sberbank. Many great lawyers and writers have been drunks. At least by publishing the article below, however, they apparently contributed to setting Kasowitz off and he showed his true nasty colors as seen in the above article. “Trump’s Russia Lawyer Isn’t Seeking Security Clearance, And May Have Trouble Getting One” by Justin Elliott and Jesse EisingerProPublica, July 11, 2017, 9:37 p.m. ProPublica https://www.propublica.org/article/trump-russia-lawyer-marc-kasowitz-alcohol-security-clearance

Sberbank is just over 50% owned (and thus controlled) by the Russian Gov: Central Bank of Russia.

We recommend going to youtube and looking up donald trump in emin agalarov’s “in another life” video about the 2013 Miss Universe Pageant. Emin also performs in the Moscow Club “SOHO Rooms”. Recall that there is Trump SoHo and Prevezon SoHo. Maybe they just love the idea of NY SoHo or London Soho or maybe there is more. https://en.wikipedia.org/wiki/Soho https://en.wikipedia.org/wiki/SoHo,_Manhattan https://miningawareness.wordpress.com/2017/07/11/is-there-a-relationship-between-trump-soho-and-prevezon-soho-holdings/