“‘Leave Now’: Australians Urged to Evacuate as ‘Catastrophic’ Fires Loom By Reuters November 11, 2019 01:55 AM SYDNEY – Authorities declared a state of emergency across a broad swath of Australia’s east coast on Monday, urging residents in high risk areas to evacuate ahead of looming “catastrophic” fire conditions…” Article here: https://www.voanews.com/east-asia-pacific/leave-now-australians-urged-evacuate-catastrophic-fires-loom
(See Map at our post bottom for general idea of how widespread the fires are in Australia.)

Based on the latest forecast, we have mapped where fires on the north coast are likely to spread during tomorrow's dangerous weather. The red shows the predicted spread of fire. Check https://t.co/NXTTCbYtYQ for detailed information, advice and maps. #nswrfs #nswfires pic.twitter.com/gVstnWDrxC 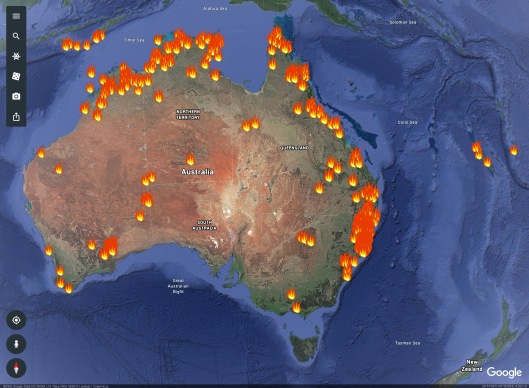 Fires over the last 48 hours in Australia. It is from an interactive near real time map, so useful only to give a general sense of the areas impacted:
https://earthdata.nasa.gov/earth-observation-data/near-real-time/firms/active-fire-data