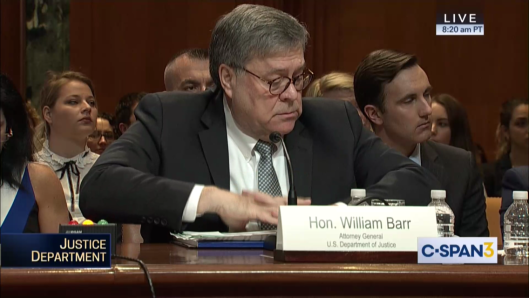 Excerpted from VOA news:
“Barr is set to testify before a Senate committee Wednesday about his no-obstruction decision and his oversight of the end of the Mueller probe.

But Barr’s planned appearance before the House Judiciary Committee Thursday is in doubt in a dispute over who will question him.

Committee chairman Jerrold Nadler of New York wants to give the 41 committee members five minutes each to ask Barr questions and then another 30 minutes for both Democratic and Republican lawyers for the committee to make more inquiries of Barr.

Nadler says Barr has no choice.

“We’ve been very clear. Barr has to come. He has to testify. It’s none of the business of a witness to try to dictate to a congressional committee what are procedures for questioning him are,” Nadler said Monday.

He added that the committee will take “whatever action we have to take” if Barr skips out on the questioning….

Mueller cited 11 instances of possible obstruction of the investigation by Trump, saying that “while this report does not conclude that the president committed a crime, it also does not exonerate him.”

With Mueller not reaching a decision on the obstruction question, Barr said he concluded no criminal charges against Trump were warranted.

https://miningawareness.wordpress.com/2019/01/16/trump-ag-pick-barrs-troubling-record-recommended-iran-contra-pardons-blocked-bcci-indictment-refused-to-appoint-special-counsel-for-iraqgate-shared-memo-on-obstruction-with-trump-lawyers/
Barr order not to indict in BCCI