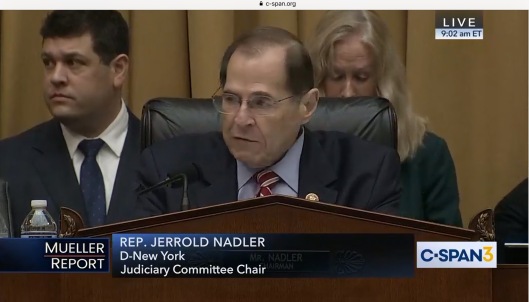 “Mueller has written a letter objecting to Barr’s summary of his report because it “did not fully capture the context, nature and substance of the investigation.” I have demanded the letter & Barr must answer for this. Mueller must be allowed to testify.” (US House Judiciary Chair Nadler, 30 April 2019, 7:34 pm EDT: https://archive.li/6QlJJ ) https://www.washingtonpost.com/world/national-security/mueller-complained-that-barrs-letter-did-not-capture-context-of-trump-probe/2019/04/30/d3c8fdb6-6b7b-11e9-a66d-a82d3f3d96d5_story.html

“This is why it is so critical for AG Barr to appear before @HouseJudiciary on Thursday so that we can ask him about the reported letter from Special Counsel Mueller over the AG’s misleading summary of Mueller report.” (US House Judiciary /Chair Nadler, 30 April 2019, 9:03 pm EDT https://archive.li/eEMZ9 )

US House Intel Chair Schiff says:
“Now it is confirmed Mueller objected to the “context, nature, and substance” of Barr’s misleading summary of the report. And the false public narrative it allowed the White House to create. No one can place any reliance on what Barr says. We need to hear from Mueller himself.” (US House Intelligence Committee Chair Adam Schiff, 8:38 PM· Apr 30, 2019 https://archive.li/6orL2 )

“The Special Counsel’s concerns reflect our own. The Attorney General should not have taken it upon himself to describe the Special Counsel’s findings in a light more favorable to the President. It was only a matter of time before the facts caught up to him.

“Attorney General Barr also should not have withheld this letter from Congress for as long as he has. I have demanded a copy from the Department of Justice. I have asked that it be delivered no later than 10:00 tomorrow morning.

“The Attorney General has expressed some reluctance to appear before the House Judiciary Committee this Thursday. These reports make it that much more important for him to appear and answer our questions. The Department of Justice has also been reluctant to confirm a date for Special Counsel Mueller to testify. Given this evening’s reports, I will press the Department to schedule that hearing without delay.” https://medium.com/@HouseJudDems/chairman-nadlers-statement-on-mueller-s-letter-to-the-attorney-general-79cecd7ab125

The only Democrats who can save us are those “of a certain age” who have the power, know-how and drive, like Nadler, Cummings, Waters, and the younger, but by no means young, Adam Schiff. And, of course, their assistants: “Jerrold Lewis Nadler (/ˈnædlər/; born June 13, 1947) is an American attorney and politician who serves as the U.S. Representative from New York’s 10th congressional district. Currently in his 14th term in congress, he has served since 1992. He is a member of the Democratic Party…” https://en.wikipedia.org/wiki/Jerry_Nadler

Our salvation isn’t going to come from a certain young new member of Congress who chose to go to an obscenely overpriced private university – too overpriced to be entirely covered by a large scholarship, and who then complains about student debt. Such a person is unhinged from reality – at least the reality of the vast majority of Americans. The combination of a state university, Pell grants for poor people, and loans would work out, if jobs were not going to immigrants on H1B visas, and if living wages were paid. If graduates could get jobs with living wages then a small amount of debt would not be a problem.

It is worth noting that US Congressman Nadler attended night law school part-time at Fordham, while working in the day.