But as the day unfolded, Barcelona was far from being Disney World.

Soon after polling stations opened, police, many drafted from outside Catalonia, moved in under orders from the national government in Madrid to block an independence referendum they and the country’s constitutional court said is illegal under the 1978 constitution that declares Spain indivisible.

For Catalan separatists, Spain’s current constitution isn’t free of the stamp of the former dictator Gen. Francisco Franco, who ruled the country for 40 years. They say underlining the constitution is a shameful, purposeful amnesia, one that ignores the suffering of Catalonia during the brutal 1930s civil war and the suppression of the Catalan language during Franco’s 40-year-long dictatorship.

The ghost of Franco was never far from Sunday’s illegal referendum.

Some of the extra police drafted into Spain’s restive north-east region had been cheered as they traveled to Catalonia by rightwing Spanish nationalists waving the national flag and chanting provocatively, “Viva Franco.” 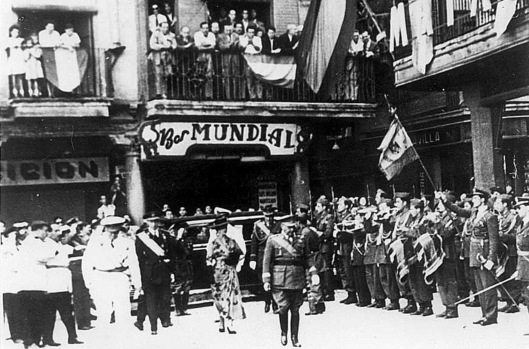 Sunday was a far cry from the unity and comradeship Spain presented to the world in August when Spaniards and Catalans mourned together the 13 killed and 100 injured when jihadists struck Barcelona.

As a gray, wet Sunday unfolded and the police mounted a speedy show of force in the Catalan capital, firing rubber bullets and wielding batons at people lining up to cast their ballots, besieging polling stations, seizing ballot boxes and removing officials overseeing the illegal vote, Catalan separatists accused them of acting like Franco.

Some analysts feared Mariano Rajoy’s center-right national government was being maneuvered cleverly by the separatists into overreacting. They argued before the vote that Madrid should just ignore a referendum that has no legal standing. They will point to Sunday’s events as confirming what they feared might happen.

Spanish officials maintained it was never a serious option to ignore the vote; to do so would be to allow lawlessness and to permit a minority to kidnap the democratic process. The midweek announcement by the Catalan regional government that it would declare independence in the event of a “yes” vote, gave Madrid no choice but to act, officials argue.

Overnight thousands of pro-secessionists, both nervous and thrilled, occupied Catalonia’s schools, presenting a festive appearance as parents with their children danced and put on concerts and events. It was a tactical move to try to preempt the police from shuttering schools to prevent them serving as polling stations, something they had been warned would happen by Madrid.

Speaking to reporters in the Spanish capital on the eve of the vote, the country’s foreign minister said, “The law guarantees democracy, what they’re pushing is not democracy, it is a mockery of democracy, a travesty of democracy.”

Many Catalans, opinion polls show 49 percent oppose secession compared to 41 percent for it, no doubt agreed with those sentiments. Catalans opposed to the vote have been less vocal than secessionists with some saying they were getting harassed by separatists when they spoke out and labeled fascists.

As dawn broke Sunday more people gathered at designated polling stations. “Votarem, votarem!” – (“We will vote!”) they chanted. “It is pretty exciting,” said pro-separatist activist Jordi Gali outside a voting center in downtown Barcelona. “So many people are united with one idea in common,” he added.

Within two hours of the polls opening, Catalan government spokesman Jordi Turull announced that 73 percent of polling stations were functioning, but added, “there are constant attacks on the computer system.” The Spanish government disputed the claim, saying most designated polling stations had been shuttered.

Pro-independence leaders were quick to denounce police intervention. Barcelona’s mayor, Ada Colau, tweeted her anger, saying, “A cowardly president has filled our city with police. Barcelona, city of peace, is not afraid.”

They received some backing from overseas. Scotland’s First Minister Nicola Sturgeon, took the rare step of commenting on another European country’s internal affairs, tweeting, “Some of the scenes in #Catalonia this morning are quite shocking and surely unnecessary. Just let people vote.”

But Spain’s Guardia Civil said its officers were being harassed and provoked and reported by early afternoon nine policemen and two Guardia Civil officers had been injured while trying to stop the referendum. Posted video showed hooded figures throwing objects at police in central Barcelona.

But in the PR war over perceptions the separatists declared a moral win Sunday even before the polls closed. “Today, the Spanish state has lost… while Catalonia has won,” said Catalonia’s president Puigdemont.” https://www.voanews.com/a/ghost-of-franco-haunting-spain/4051787.html (Photo added:
Visita de Franco a Reus, 1940, by Joan Barceló )

“The People’s Party was a re-foundation in 1989 of the People’s Alliance (Alianza Popular, AP), a party led and founded by Manuel Fraga Iribarne, a former Minister of the Interior and Minister of Tourism during Francisco Franco’s dictatorship.”

“AP was born on 9 October 1976… Out of the seven founders the first 6 had held cabinet-level offices during the dictatorship of Francisco Franco. The odd one …. had also been part of the Francoist administration… Fraga… made a turn towards Neo-Francoism.” [1]