“As of 2018, it is estimated that the country with the most people living in extreme poverty is Nigeria, at 86 million.” https://en.wikipedia.org/wiki/Extreme_poverty Meanwhile, Nigerian-American Nikolas Ajagu, husband of Kamala Harris’ niece, Meena, wore disgustingly expensive and ugly sneakers, which are supposed to sell for over two thousand dollars ($2,000), but are selling for up to twenty-five thousand dollars ($25,000) at the inauguration. https://archive.is/rIfwT Over half of Nigerians live on less than two dollars per day: http://www.fao.org/3/i9930en/I9930EN.pdf But, he spends thousands of dollars on hideously ugly shoes. Kamala and Maya’s father, Donald Harris, an economist, must be horrified by the cost of these shoes. Even within the United States, the median annual income (2017) for black women is $23,639 and white women is $25,793. https://www2.census.gov/programs-surveys/cps/tables/time-series/historical-income-people/p02.xls

Nigerian elites are well-known for their corruption, and love of luxury items: “Political corruption is a persistent phenomenon in Nigeria. In 2012, Nigeria was estimated to have lost over $400 billion to corruption since independence. In 2018, the country ranked 144th in the 180 countries listed in Transparency International’s Corruption Index (with Somalia, at 180th, being the most corrupt, and Denmark the least)” https://en.wikipedia.org/wiki/Corruption_in_Nigeria

This is one of the key findings of a new report published by IOM, the UN Migration Agency, Human Trafficking through the Central Mediterranean Route, which was released in Italian this week (21 July) by IOM’s Coordination Office for the Mediterranean in Rome. An English version will be available soon.

Among other findings, the report states that sexual exploitation increasingly involves younger girls – often minors – who are already subject to violence and abuse on their way to Europe. IOM estimates that 80 per cent of girls arriving from Nigeria – whose numbers have soared from 1,454 in 2014 to 11,009 in 2016 – are potential victims of trafficking for sexual exploitation. 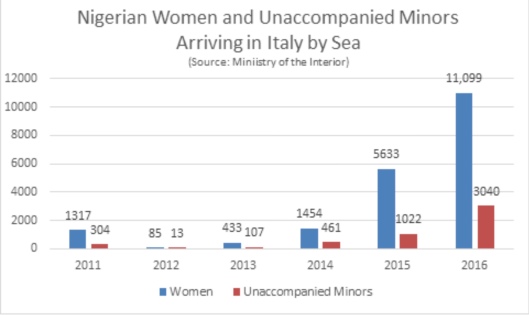 The report is based on data collected by IOM at landing sites and in reception centres for migrants in the regions of southern Italy, where the Organization carries out identification of potential victims and assists those who, once identified, decide to escape their exploiters and accept IOM support.

“Trafficking is a transnational crime that devastates the lives of thousands of people and is the cause of untold suffering,” said Federico Soda, Director of the IOM Coordinating Office for the Mediterranean. “This is a theme we have been working on for years, committing to protect, prevent and collaborate with the authorities dealing with organized crime.”

IOM Project Manager Carlotta Santarossa added: “The report describes the organization’s activities in the face of this phenomenon: the difficulties in protecting victims and the main vulnerabilities identified among several cases of people who were assisted by the Organization. We also wanted to tell some of the stories of people who have been assisted by IOM staff to highlight the true nature of this painful and hateful form of slavery. We also feel that it is increasingly urgent that data analysis be accompanied by an examination of the market these girls supply, and the growing demand for paid sexual services.”

IOM staff working in Sicily and elsewhere meet potential trafficking victims as soon as they reach Italian soil. This allows IOM to develop a list of indicators that are useful in the identification of potential trafficking victims amongst the newly arrived migrants, using indicators based on information collected during individual and group meetings with migrants. These indicators are broadly described in the report, accompanied by some of the stories that have been collected by IOM staff during their activities.

Among the more significant indicators:
* Gender: Most sex trafficking victims are women;
* Age: Most victims are young and often underage, between 13 and 24 years old. (In 2016, there was a decrease in the age of the youngest victims of trafficking);
* Nationality: It is important to emphasize the peculiarities of the case of trafficking victims from Nigeria, not only from Edo State but from different parts of the country (Delta, Lagos, Ogun, Anambra, and Imo are the states of origin that, apart from Edo State, are most cited by the Nigerians met by IOM);
* Psycho-physical Wellness: In a group setting, victims of trafficking are usually the most submissive and silent. Sometimes they are obviously controlled by other migrants that speak on their behalf, or refuse to let IOM staff interview them in private.

Other indicators of trafficking emerge during in-depth individual talks; for example, some migrants claim that they have not paid anything for the journey because someone else paid for their movements. When IOM staff identify a potential trafficking victim, they explain to them that it is possible to access certain protection mechanisms and, with the victim’s consent, the Organization’s staff report the victim on the anti-trafficking toll-free number. If the person agrees, IOM staff also provide assistance in communicating and filing a report to the investigating authorities.

Activities in the field demonstrate that most trafficking victims are not willing, at least at first, to reveal their experience or to take advantage of security programmes provided by IOM and local institutions. There are many reasons for this including links between trafficking victims and traffickers, the control that the accompanying person (for instance, madame or boga) has over the victims, or the belief that victims cannot violate an oath sealed with a voodoo ritual or a rite of initiation (the victim is committed to honouring her agreement). Finally, there is a sense of responsibility towards one’s family that results in a fear of retaliation by traffickers on the victim’s family members back in their country of origin.

Very often the young women whom IOM staff meet have been victims of sexual violence during their journey; they have experienced serious trauma and suffer from psychological distress.

Very often the young women whom IOM staff meet have been victims of sexual violence during their journey; they have experienced serious trauma and suffer from psychological distress

For more information on the report, please go to http://www.italy.iom.int/sites/default/files/news-documents/RAPPORTO_OIM https://www.iom.int/news/un-migration-agency-issues-report-arrivals-sexually-exploited-migrants-chiefly-nigeria “Press Releases and Press Briefing Notes may be reproduced freely without the right to sell or charge for its use, provided IOM is specifically and clearly identified as the source of the materials“. https://www.iom.int/terms-conditions (Apart from this, under copyright law, press releases are considered public domain, by definition, from what we’ve read.)

If Nikolas Ajagu and his parents are so smart then why aren’t in Nigeria, helping the country? If they aren’t so smart, then why are they here? His father is Christopher O. Ajagu, PhD, an Igbo Catholic. Is Nikolas an anchor baby too? Or simply a product America’s badly conceived immigration policy? Meena’s biological father is believed to be Italian-American.

“The Descendants of Slaves in Nigeria Fight for Equality”, by Adaobi Tricia Nwaubani, July 11, 2019 “Slavery existed among the Igbo long before colonization, but it accelerated in the sixteenth century, when the transatlantic trade began and demand for slaves increased…” The New Yorker https://archive.is/Knn9t

“Italian court acquits Shell, Eni in Nigeria corruption case: Energy giants Eni and Shell were accused of corruption in the 2011 purchase of an offshore oilfield in Nigeria. The $1.3 billion sale was the biggest corruption scandal to hit the industry… “The Federal Republic of Nigeria is disappointed in today’s ruling in Milan, but thanks the Italian prosecuting authorities for their tireless efforts,” a government spokesman said…”. Read the article here: https://www.dw.com/en/italian-court-acquits-shell-eni-in-nigeria-corruption-case/a-56905415

Meena’s biological father is believed to be Italian – if her mother even knows. Her mother, Maya, a member of the CFR (Council on Foreign Relations), is half Tamil Hindu Brahmin (Iyer) and half mixed race Jamaican, born to two foreign students on non-immigrant student visas. Her aunt, Kamala, is an anchor baby, whose citizenship is based on an apparent misinterpretation of the US Constitution. Her husband is Nigerian, and she is trying to demonize white (Christians): https://www.thegatewaypundit.com/2021/03/kamala-harriss-niece-meena-harris-slams-white-men-boulder-shooting-quietly-deletes-tweet-shooter-ided-muslim/ The recent shooter is very white, but he’s Muslim from the MENA countries (Middle East North Africa). People from MENA are classified by the US Census as white and many are very white, but the woke champagne socialists appear ignorant of this fact. Strangely, the shooter was allowed to immigrate from Syria the same year (2002) that Bush declared Syria part of the Axis of Evil. Syria was a Soviet ally, before it was a Russian ally. Kamala, Maya and Meena are Gopalan-Iyer Brahmins. We pity their father-grandfather, Donald Harris, because they appear to be antithetical to his academic work and legacy and an embarrassment to his name. They should call themselves the Iyers/Ayyers, as he had little to do with their upbringing and apparently has had little influence on the outcome. One of Donald Harris’ last papers (2010) was about how Jamaica should avoid debt and focus on tourism and exports. Too bad he couldn’t get his daughter to avoid the debt trap, which will destroy the United States.