He warns that “When a subject lies to investigators, it strikes at the core of the government’s efforts to find the truth and hold wrongdoers accountable. It may ultimately impede those efforts…”
Read the entire Op-Ed here or on the Washington Post site: https://web.archive.org/web/20200711223434/https://www.washingtonpost.com/opinions/2020/07/11/mueller-stone-oped/?arc404=true

From VOA News (last year): “Roger Stone Guilty of Witness Tampering, Lying to Congress November 15, 2019 11:53 AM WASHINGTON –  Roger Stone, a longtime friend and ally of President Donald Trump, has been found guilty at his trial in federal court in Washington.

Stone was convicted Friday. He was charged in a seven-count indictment that alleged he lied to lawmakers about WikiLeaks, tampered with witnesses and obstructed a House intelligence committee probe.

His trial highlighted how Trump campaign associates were eager to gather information about emails hacked emails damaging to Hillary Clinton that were released by the anti-secrecy website WikiLeaks.

He’s also accused of trying to intimidate Credico and threatening to take his dog.

Stone had denied the allegations and decried the case as politically motivated.” https://www.voanews.com/usa/us-politics/roger-stone-guilty-witness-tampering-lying-congress
SEE ORIGINAL INDICTMENT AND COMMENTARY AFTER THE CNN VIDEO AND WYDEN STATEMENT
Or click here: https://miningawareness.wordpress.com/2019/01/25/roger-stone-arrested-by-fbi-indictment-seems-to-confirm-conspiracy-end-appears-near/

https://www.cnn.com/2019/11/12/politics/roger-stone-trial-rick-gates-testimony/index.html https://www.independent.co.uk/news/world/americas/us-politics/roger-stone-trial-trump-wikileaks-hack-rick-gates-testimony-dnc-emails-russia-a9200496.html “Rick Gates today provided blockbuster testimony indicating that Donald Trump lied under oath when he told Special Counsel Mueller that he did not recall discussing with Roger Stone the release of emails stolen by Russian intelligence officials during the 2016 campaign. Gates painted a picture of a campaign that was not only informed about the releases of stolen emails, but coordinated its campaign around those releases. At this point there is no question the Trump campaign, and Donald Trump himself, enthusiastically accepted the help of a foreign power to improve his chances of winning the 2016 election.” ### (US Senator Wyden, November 12, 2019: https://www.wyden.senate.gov/news/press-releases/wyden-statement-on-rick-gates-testimony-in-roger-stones-trial- ) https://www.cnn.com/2019/11/12/politics/roger-stone-trial-rick-gates-testimony/index.html

Update note: Roger Stone probably gives himself too much credit in these elections. It is starting to appear that they were elected despite Roger Stone and that he dirties their names. In particular, Trump looks better and better and Stone looks worse and worse. We no longer believe that Trump colluded with Russia, however Roger Stone may have. Both Manafort and Stone were fired from the Trump campaign. We suspect that they were part of a plan to entrap Trump. Most importantly, both political parties have a Russia problem: https://miningawareness.wordpress.com/2022/03/27/trump-sues-hillary-et-al-for-conspiracy-against-him-plus-steele-dossier-as-russian-provocation/

From our January 25, 2019 blog post: https://miningawareness.wordpress.com/2019/01/25/roger-stone-arrested-by-fbi-indictment-seems-to-confirm-conspiracy-end-appears-near/
Finally, the self-proclaimed “dirty trickster”, Roger Stone, who helped bring us Nixon, Bush, and Trump was arrested early this morning by the FBI.

https://archive.li/kfBjc
Based on the indictment and earlier filings and information, the line to Russian conspiracy and Trump-Trump campaign looks very short. Roger Stone, two assistants – apparently Jerome Corsi, and Randy Cordico, with a little help from a British Trump fan – likely a Brexit Boy. And, of course, with the help of Julian Assange, Wikileaks, and Russian hackers. Trump seems to admit knowing that the hacks are from Russia, too, in his now infamous “Russia are you listening” statement. The question remains of who and how many senior Trump campaign officials are involved. At the very least there is conspiracy between Stone, Wikileaks-Assange, Trump-Trump Campaign and others. But, it really seems to be a conspiracy undertaken while knowing that Russia is providing the hacks. It is possible that Trump/Trump campaign were aware of the source and Wikileaks-Assange was not. There are many potential spin-off investigations, but we may be near the end of the Trump-Russia election conspiracy part.

Remember, for instance, this email? “This is obviously very high level and sensitive information but is part of Russia and its government’s support for Mr. Trump – helped along by Aras and Emin” [Agalarov] (June 3, 2016, Rob Goldstone to Trump Jr.)

Do Trump Jr. Emails Indicate An Ongoing Conspiracy Between The Kremlin And The Trumps?

Who is Roger Stone: https://miningawareness.wordpress.com/2019/01/25/the-evil-trio-from-mccarthy-to-trump-via-watergate-reagan-bush-cohn-stone-manafort-3/

Excerpt, discussing UK associate-Trump campaign supporter, names added in brackets: “On or about July 25, 2016, STONE sent an email to Person 1 with the subject line, “Get to [[Assange] the head of Organization 1].” The body of the message read, “Get to [[Assange] the head of Organization 1] [a]t Ecuadorian Embassy in London and get the pending [[Wikileaks] Organization 1] emails … they deal with Foundation, allegedly.” On or about the same day, Person 1 [Corsi?] forwarded STONE’s email to an associate who lived in the United Kingdom and was a supporter of the Trump Campaign https://www.lawfareblog.com/document-indictment-roger-stone

The British go-between referenced in the indictment must have been a Brexit Boy, perhaps Nigel Farage? https://www.theguardian.com/politics/2017/apr/23/when-nigel-farage-met-julian-assange Will this lead us back to Mississippi’s Governor, who seemed to be a sort of go-between for Trump and the Brexit Boys, and to the BGR Group, who represent Alfa Bank, and worked on the CFIUS for selling Uranium One to Russia? Or need we go that deep?

Trump’s July 27, 2016, “Russia are you listening” statement seems to close the circle, especially assuming that the Corsi draft indictment is accurate:
C-Span link: http://youtu.be/3kxG8uJUsWU
“Russia, if you’re listening, I hope you’re able to find the 30,000 emails that are missing,”
The Stone indictment notes that: “On or about June 14, 2016, the DNC—through Company 1—publicly announced that it had been hacked by Russian government actors“. Recall, in this context, the June 3, 2016 email to Trump Jr.

From the indictment against the Russian hackers, note the evening of July 27th:
“In or around 2016, the Russian Federation (“Russia”) operated a military intelligence agency called the Main Intelligence Directorate of the General Staff (“GRU”). The GRU had multiple units, including Units 26165 and 74455, engaged in cyber operations that involved the staged releases of documents stolen through computer intrusions. These units conducted large-scale cyber operations to interfere with the 2016 U.S. presidential election. Defendants… were GRU officers who knowingly and intentionally conspired with each other, and with persons known and unknown to the Grand Jury (collectively the “Conspirators”), to gain unauthorized access (to “hack”) into the computers of U.S. persons and entities involved in the 2016 U.S. presidential election, steal documents from those computers, and stage releases of the stolen documents to interfere with the 2016 U.S. presidential election. 3. Starting in at least March 2016, the Conspirators used a variety of means to hack the email accounts of volunteers and employees of the U.S. presidential campaign of Hillary Clinton (the “Clinton Campaign”), including the email account of the Clinton Campaign’s chairman“. Case 1:18-cr-00215-ABJ Document 1 Filed 07/13/18 Page 1-2 of 29
“The Conspirators spearphished individuals affiliated with the Clinton Campaign throughout the summer of 2016. For example, on or about July 27, 2016, the Conspirators attempted after hours to spearphish for the first time email accounts at a domain hosted by a third-party provider and used by Clinton’s personal office. At or around the same time, they also targeted seventy-six email addresses at the domain for the Clinton Campaign Case” 1:18-cr-00215-ABJ Document 1 Filed 07/13/18 Page 7 -8 of 29 https://www.justice.gov/file/1080281/download

Excerpts from Draft indictment of Corsi, as provided to WaPo by Corsi, with names (Stone, Wikileaks, Assange) added by us:
“During the interview, CORSI said that in the summer of 2016 an associate (“Person 1” [Roger Stone]) who CORSI understood to be in regular contact with senior members of the Trump Campaign, including with then-candidate Donald J. Trump, asked CORSI to get in touch with Organization 1 [Wikileaks] about materials it possessed relevant to the presidential campaign that had not already been released…

“On or about July 25, 2016, Person 1 [Stone] sent an email to CORSI with the subject line, “Get to [[Assange] the founder of Organization 1].” The body of the message read: “Get to [[Assange] the founder of Organization 1] [a]t Ecuadorian Embassy in London and get the pending [[Wikileaks] Organization 1] emails . . . they deal with Foundation, allegedly.” On or about the same day, CORSI forwarded Person 1’s email to the overseas individual… UNITED STATES DISTRICT COURT FOR THE DISTRICT OF COLUMBIA UNITED STATES OF AMERICA v. JEROME CORSI, Defendant. https://assets.documentcloud.org/documents/5302125/Draft-Jerome-Corsi-statement-of-offense.pdf

From the Roger Stone indictment:
“17. On or about October 7, 2016, [Wikileaks] Organization 1 released the first set of emails stolen from the Clinton Campaign chairman. Shortly after Organization 1’s release, an associate of the high-ranking Trump Campaign official sent a text message to STONE that read “well done.”…

During his HPSCI testimony, STONE was asked, “did you discuss your conversations with the intermediary with anyone involved in the Trump campaign?” STONE falsely and misleadingly answered, “I did not.” In truth and in fact, and as described above, STONE spoke to multiple individuals involved in the Trump Campaign about what he claimed to have learned from his intermediary to Organization 1, including the following:

a. On multiple occasions, STONE told senior Trump Campaign officials about materials possessed by Organization 1 and the timing of future releases.

b. On or about October 3, 2016, STONE wrote to a supporter involved with the Trump Campaign, “Spoke to my friend in London last night. The payload is still coming.”

c. On or about October 4, 2016, STONE told a high-ranking Trump Campaign official that the head of Organization 1 had a “[s]erious security concern” but would release “a load every week going forward.” https://www.lawfareblog.com/document-indictment-roger-stone

Roger Stone indictment with emphasis added. Original uploaded by Lawfare at 6.30 am this morning: https://www.lawfareblog.com/document-indictment-roger-stone 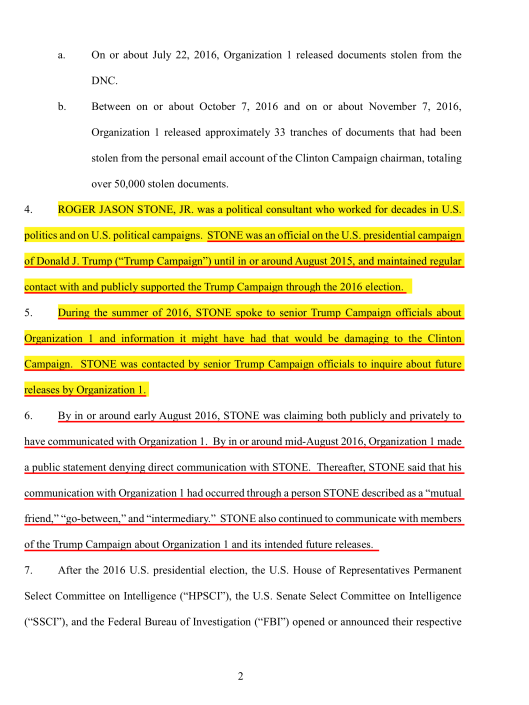 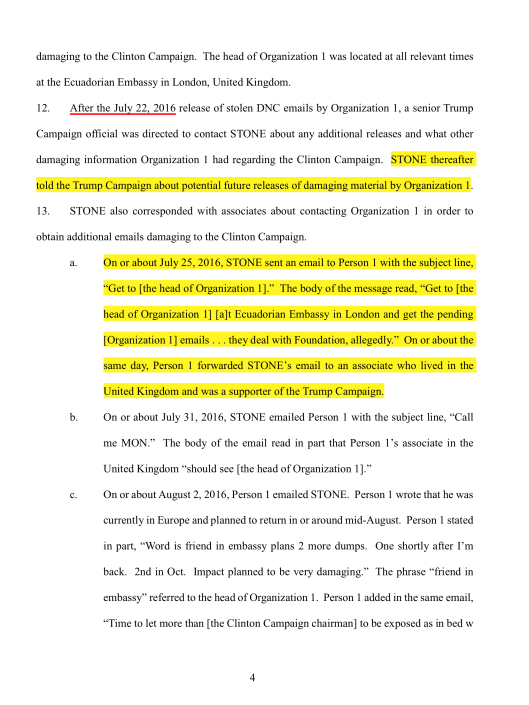 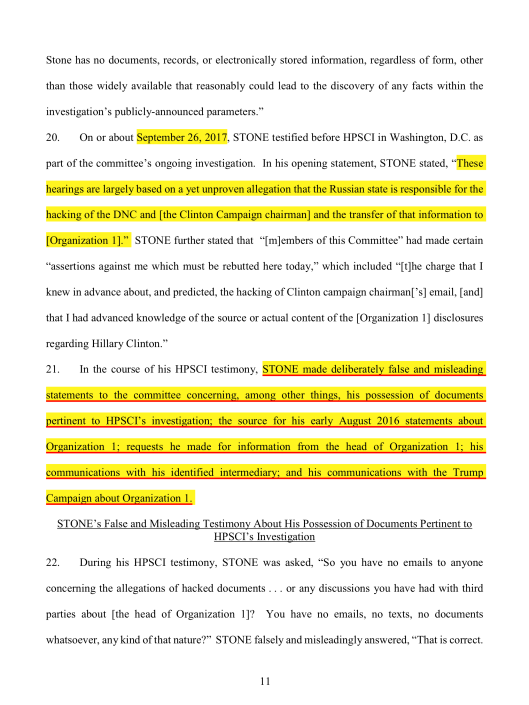 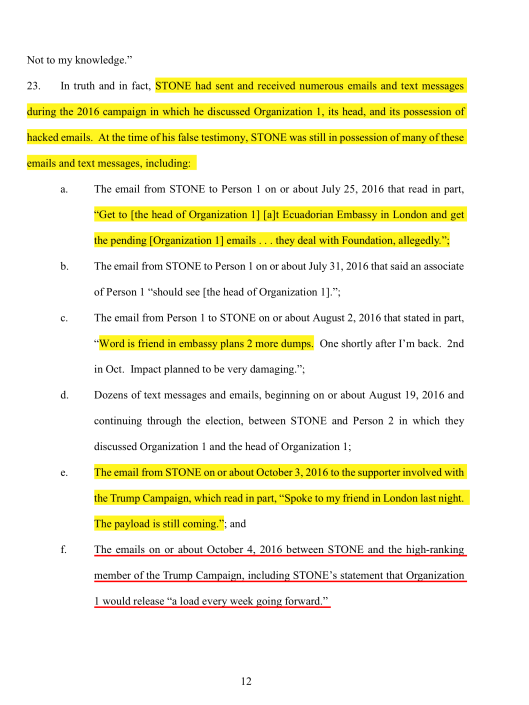 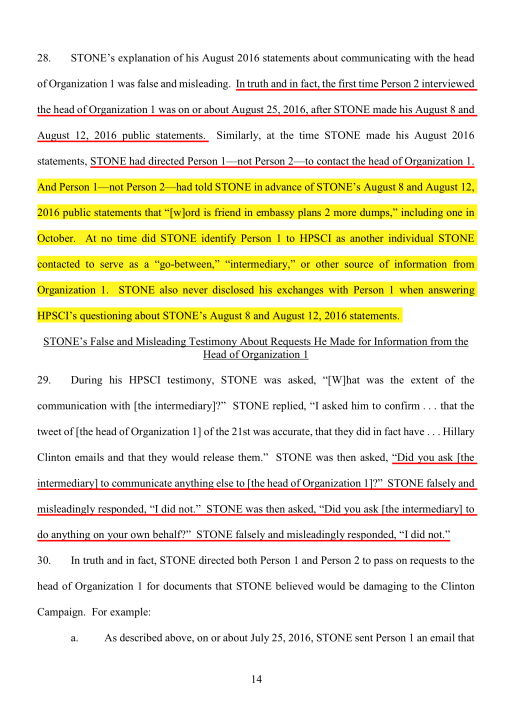 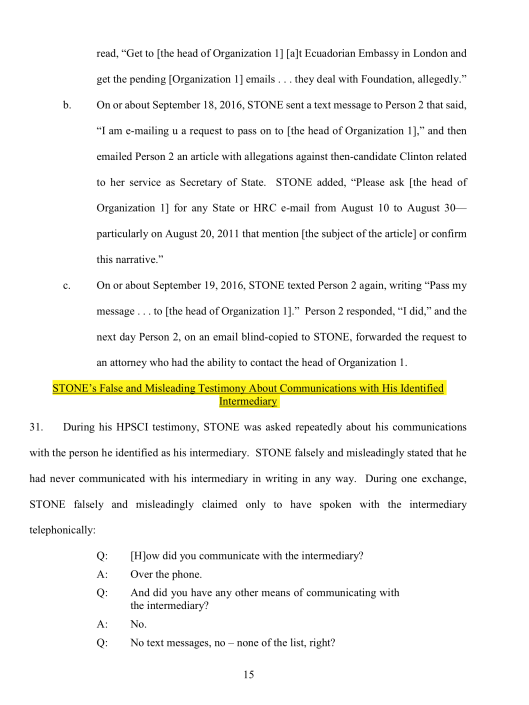 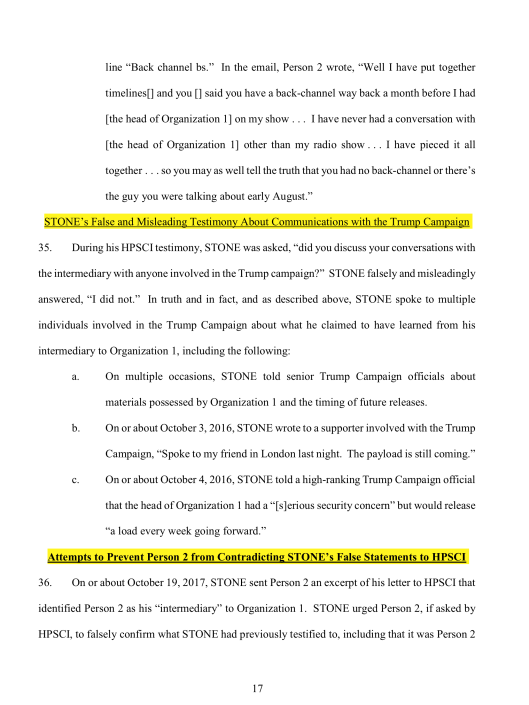 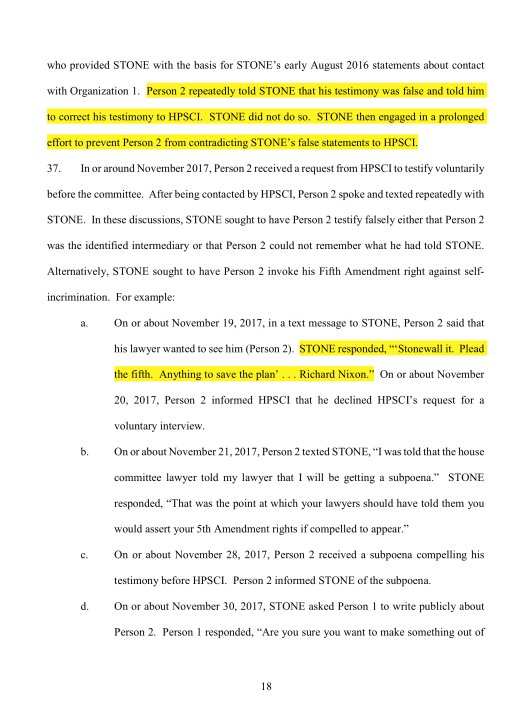 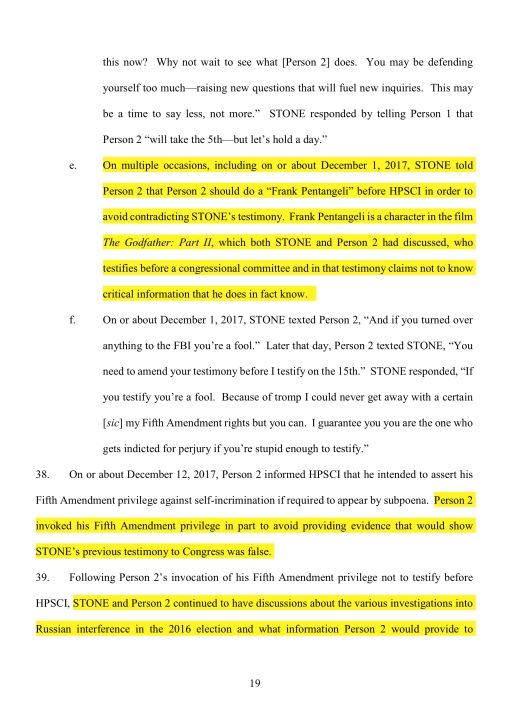 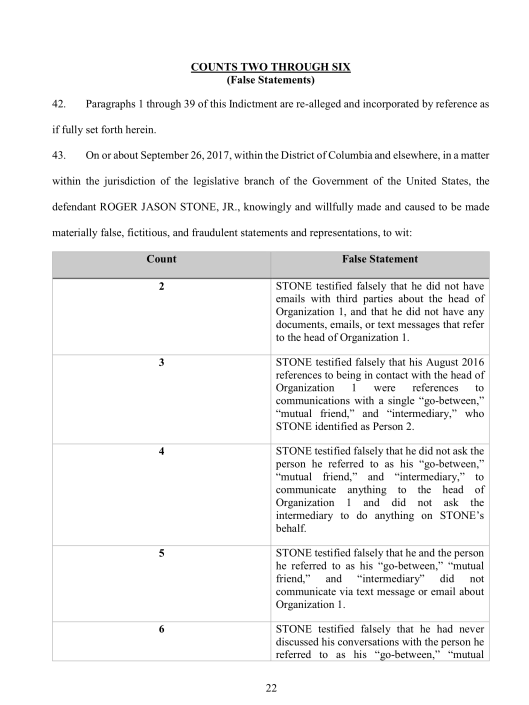 Some of our posts about Roger Stone. There may be more. Do a search in the search window for additional posts.

US Congressman Schiff on Nixon Dirty Trickster-Trump Friend Roger Stone and His Refusal to Answer Question; Stone’s Philosophy is Admit Nothing, Deny Everything, Launch Counterattack

The Evil Trio from McCarthy to Trump via Watergate, Reagan, Bush: Cohn-Stone-Manafort

Roger Stone Ordered Before Judge; May Finally Be Fully Gagged Or Jailed

Roger Stone Apparently Falls Sick During Trial; Leaves Courtroom; Moments Later Someone “Moaned Loudly and Collapsed” in Back of Courtroom

Roger Stone Sentence Cut in Half After Trump-Barr Intervention; Stone Left Courthouse Looking like a Cross Between a Mobster and the Vodou Spirit of Death