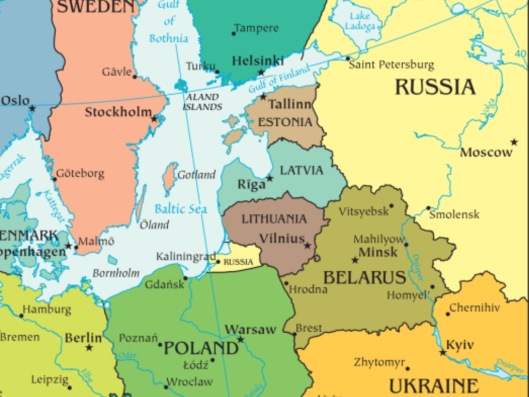 How many would come out with a high risk of arrest in the US or UK? How many in subfreezing temperatures? Not many, meaning these are huge protests by committed and brave people. This is the bravery of Thaddeus Kosciuszko who was born in Belarus and came to help the United States fight for its freedom from Britain.

The protesters held a noontime march from October Square to Independence Square and formed a human chain near the main post office.

Uniformed police were deployed but did not intervene against the demonstrators.
A previous demonstration in December saw multiple arrests.

The gathering, in subfreezing temperatures, appeared to attract slightly fewer participants than the previous demonstrations, one of which attracted upward of 1,000 people.

The unsanctioned rallies were prompted by a fresh round of talks early this month between Russian President Vladimir Putin and Belarusian President Alyaksandr Lukashenka that coincided with the 20th anniversary of a 1999 union treaty that was supposed to create a unified state.

The talks hit a snag that Lukashenka explained by saying he was merely seeking “equal terms” in mutual relations.

Minsk is heavily reliant on Moscow for cheap oil and billions in annual subsidies to prop up its Soviet-era economy.

Moscow has pressured Minsk to accelerate military and economic integration.

There have been signs that Russia’s annexation of Ukraine’s Crimean Peninsula in 2014 and its subsequent support for armed separatists in eastern Ukraine spooked Lukashenka and spurred his government to scale back its dependence on Russia.
Based on reporting by RFE/RL’s Belarus Service
Copyright (c) 2019. RFE/RL, Inc. Reprinted with the permission of Radio Free Europe/Radio Liberty, 1201 Connecticut Ave NW, Ste 400, Washington DC 20036” https://www.rferl.org/a/minsk-sees-fifth-protest-over-relations-with-russia/30350461.html