Related Post: https://miningawareness.wordpress.com/2018/06/11/trump-epstein-rape-of-13-year-old-girl-allegations-court-filings Prince Andrew certainly looks angst. Is Jeffrey Epstein why the UK Royal Family was welcoming to Trump, apart from the fact that Trump’s mother was British born and raised? Trump figures prominently in the alleged Epstein “Little Black Book” of phone numbers. Henry Kissinger is also in the alleged “Little Black Book”, as is Alan Dershowitz, and as are many others. The alleged Epstein “Little Black Book” may include people that Epstein unsuccessfully attempted to entrap, along with those who were successfully entrapped; and those participated in sex with minors without entrapment. As well, names could appear for a variety of other reasons. For instance, UPS is found in his “Little Black Book”, proving the need to practice discernment.

Prince Andrew with 17 year old Virginia Roberts (now Giuffre) who alleges that she was kept as a sex slave by Jeffrey Epstein, and alleges having had sex with Trump apologist Alan Dershowitz. This has led to defamation suits and countersuits. https://miningawareness.wordpress.com/2019/07/08/ruling-re-the-unsealing-of-the-summary-judgement-record-of-epstein-related-cases/
Virginia Roberts at 15 or 16 years old.

Virginia Roberts (Giuffre) on allegations against Bill Clinton, below. It is worth noting that while Trump figures prominently in Epstein’s alleged “Little Black Book” of phone numbers, the Clintons do not. Rather, their assistants do – assistants who were in close contact with each other; assistants who ultimately were fired or quit, and who appear to be a complicated story in and of themselves. The list of Trump contact phone numbers in the alleged “Little Black book” even includes his brother, Robert (see further below).

We believe that this excerpt from Virginia Roberts Giuffre’s testimony to the court is highly relevant to the state of international affairs (no conscious pun intended): “19. In addition to constantly finding underage girls to satisfy their personal desires, Epstein and Maxwell also got girls for Epstein’s friends and acquaintances. Epstein specifically told me that the reason for him doing this was so that they would “owe him,” they would “be in his pocket,” and he would “have something on them.” I understood him to mean that when someone was in his pocket, they owed him favors. I also understood that Epstein thought he could get leniency if he was ever caught doing anything illegal, or more so that he could escape trouble altogether… Epstein also trafficked me for sexual purposes to many other powerful men, including politicians and powerful business executives. Epstein required me to describe the sexual events that I had with these men presumably so that he could potentially blackmail them. I am still very fearful of these men today.” (Excerpted from Testimony of Virginia Roberts Giuffre, Case 9:08-cv-80736-KAM Document 291-1 Entered on FLSD Docket 01/21/2015) http://images.politico.com/global/2015/02/03/edwardsdershaff1.pdf

While we believe Virginia Roberts Giuffre, and find her testimony credible, it is important to bear in mind what the U. S. Court of Appeals for the Second Circuit noted, on July 3rd, 2019, in related cases: “We therefore urge the media to exercise restraint in covering potentially defamatory allegations, and we caution the public to read such accounts with discernment.” Case 18-2868, Document 213-1, 07/03/2019, 2600261, Page24 of 25 https://assets.documentcloud.org/documents/6181300/Epstein-ca2-20190703.pdf 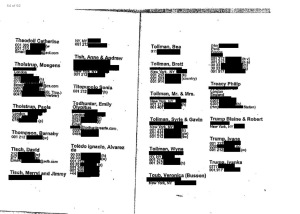 Warning: This topic is inappropriate for minors. Parental guidance required. 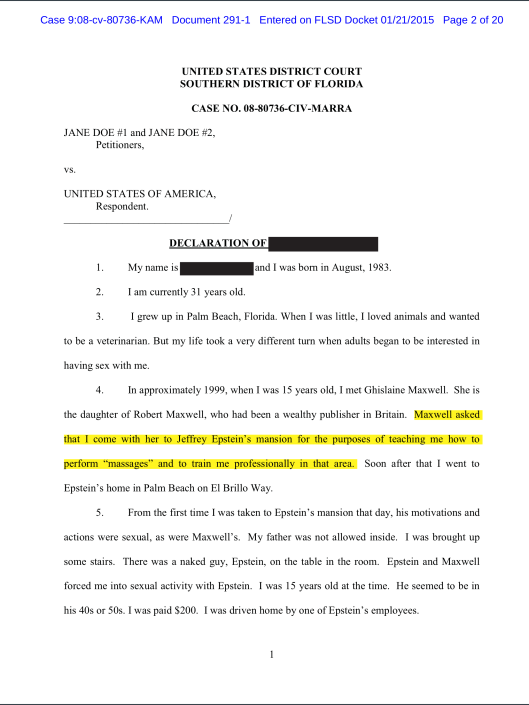 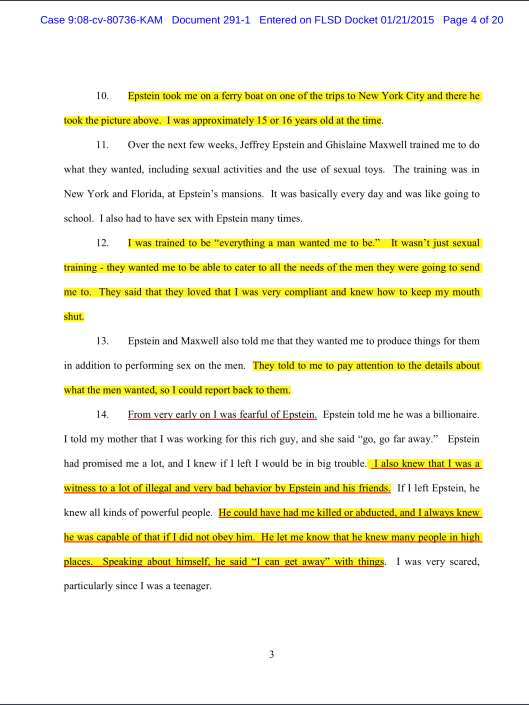 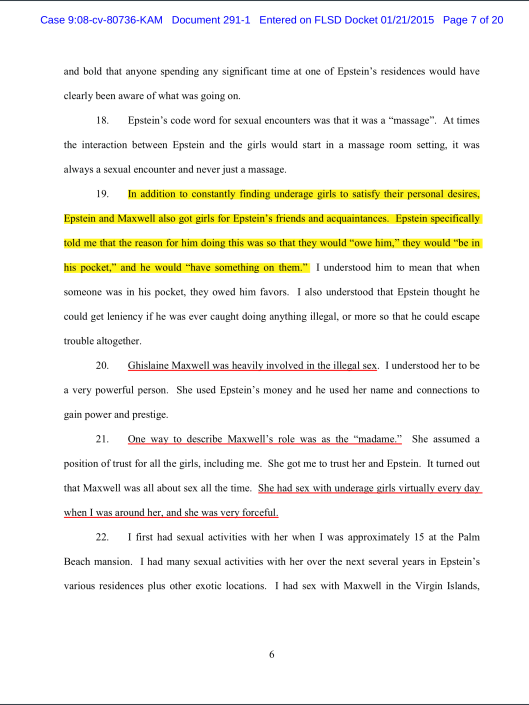 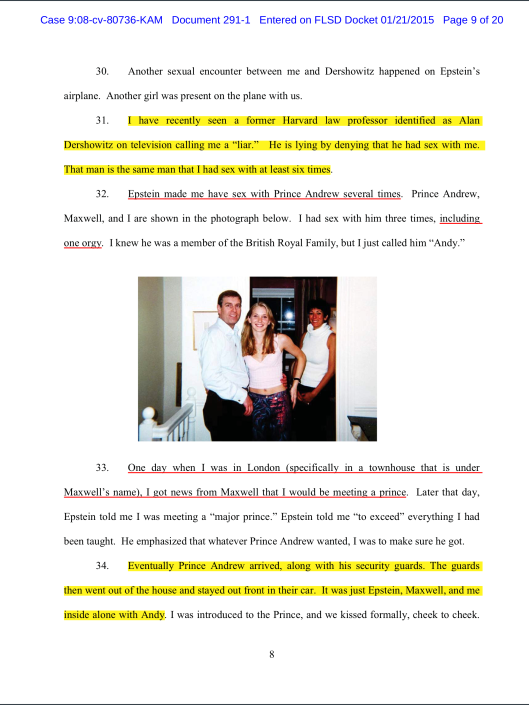 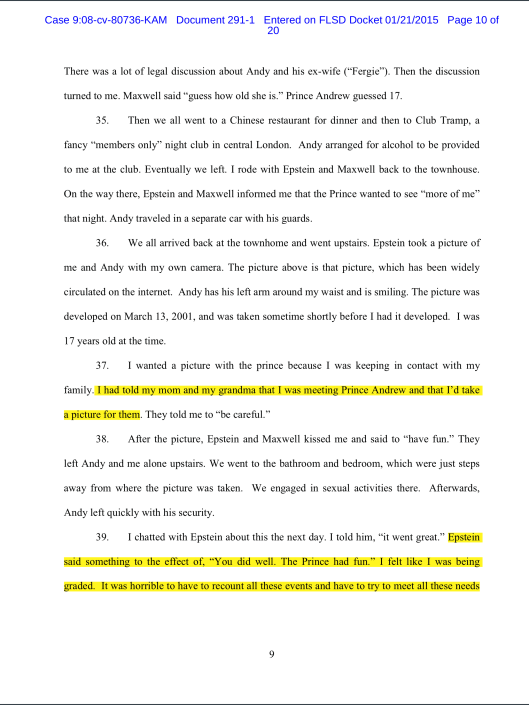 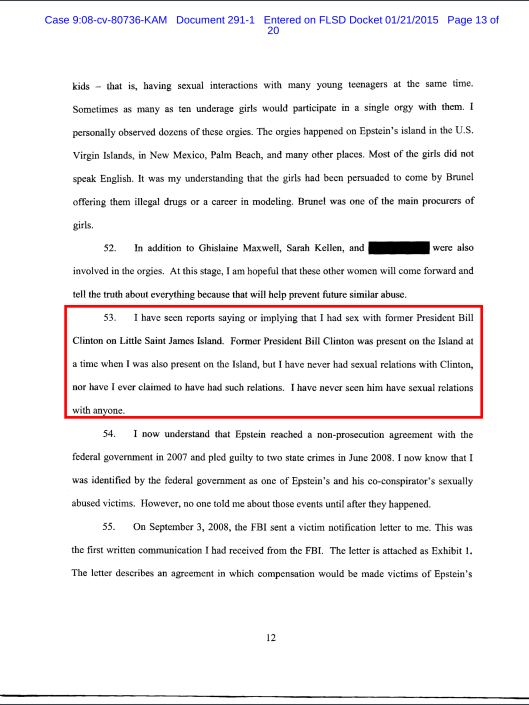 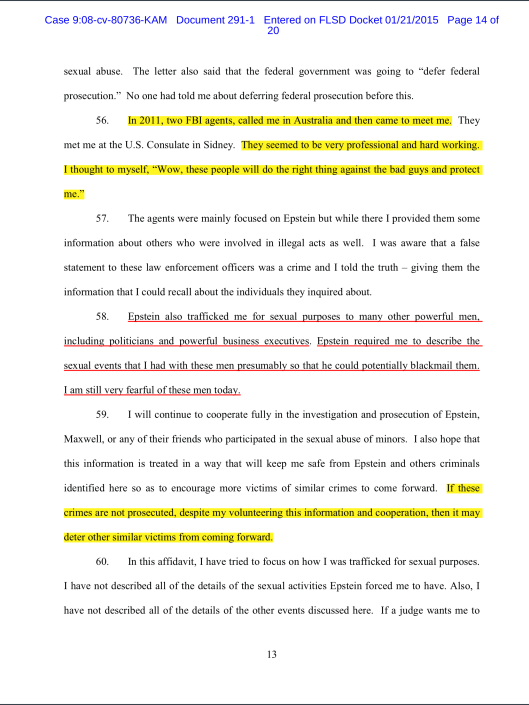 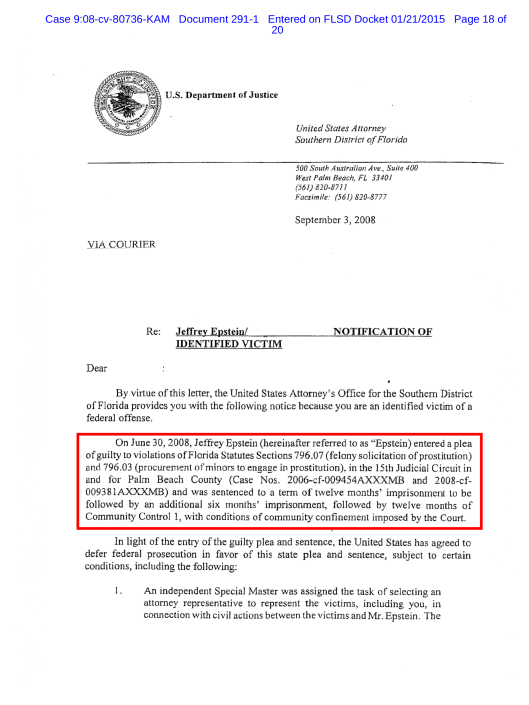