Canadian born Republican Senator Ted Cruz of Texas has actively intervened on behalf of a Canadian (uranium) mining company, against a US State (Virginia), along with Senators Cotton of Arkansas and Inhofe of Oklahoma.

They accuse Virginia of subversion for trying to protect its environment, whereas they are clearly the subversives, trying to undermine the right of a US state to protect itself from a foreign mining company. They have intervened in a Supreme Court case against Virginia: “To prevent state subversion of a critical national policy“, they claim. But, US States have the right to regulate (uranium) mining on non-Federal land.

Perhaps they are accusing Virginia of being subversive to the British Crown? Indeed. It was called the American Revolution: “The history of Virginia in the American Revolution begins with the role the Colony of Virginia played in early dissent against the British government and culminates with the defeat of General Cornwallis by the allied forces at the Siege of Yorktown in 1781… Numerous Virginians played key roles in the Revolution, including George Washington, Patrick Henry, and Thomas Jefferson.” https://en.wikipedia.org/wiki/Virginia_in_the_American_Revolution 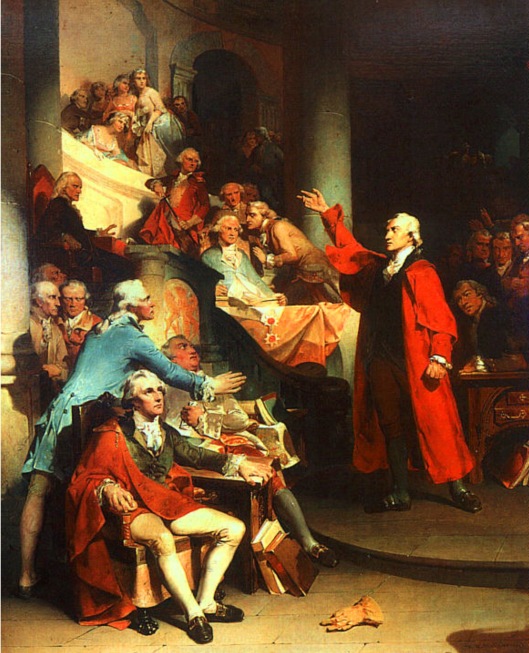 Patrick Henry Before the Virginia House of Burgesses in 1765: “If this be treason, make the most of it!”, painting by Peter F. Rothermel, 1851

This case will have broader applications, as well, due to the nature of judicial precedents, under Common Law.

Ted Cruz appears to have lived in Canada until around 4 or 5 years of age. According to Canadian media: “Ted Cruz: Made in Canada: Before he was running for president, the Texas senator was little Felito from Calgary” by Jason Markusoff and Allen Abel Jan 13, 2016 http://web.archive.org/web/20180715183318/https://www.macleans.ca/politics/washington/ted-cruz-made-in-canada

On Monday, November 5th, the U.S. Supreme Court heard the case about if US states have the right to protect themselves against uranium mining, including foreign uranium miners. By extension, this appears a question of if communities and individuals have the right to protect their property, as well – whether from harmful pollution or anything else. It is one of Kavanaugh’s first cases, and not surprisingly, he appears to be leaning in favor of the Canadian mining company.

Republican Senators Ted Cruz, Tom Cotton, and Jim Inhofe don’t want Virginia to be able to protects its citizens and environment from uranium mining. Contrary to what Cruz-Cotton-Inhofe assert, the National Academy of Science says that uranium mining falls under state jurisdiction, not federal. Therefore Cruz-Cotton-Inhofe’s assertion is false: “Virginia has enacted a blanket prohibition on uranium mining due to concerns about the radiological hazards of post-mining activities—activities committed exclusively to the Commission’s regulatory authority. To prevent state subversion of a critical national policy, the Court should reaffirm that the Act’s preemptive scope turns on the purpose and effect of a state’s statute, even when, as here, the text of the statute purports to regulate activities appropriately within the state’s jurisdiction.” No. 16-1275 IN THE Supreme Court of the United States ___________
VIRGINIA URANIUM, INC., et al., Petitioners, v. JOHN WARREN, et al., Respondents. ___________
On Writ of Certiorari to the United States Court of Appeals for the Fourth Circuit
___________
BRIEF OF SENATOR TOM COTTON, SENATOR JIM INHOFE, AND SENATOR TED CRUZ AS AMICI CURIAE IN SUPPORT OF PETITIONERS ___________
GORDON D. TODD * KIMBERLY A. LEAMAN T.J. HERRON SIDLEY AUSTIN LLP 1501 K Street, N.W. Washington, D.C. 20005 (202) 736-8000 gtodd@sidley.com Counsel for Amici Curiae July 26, 2018 * Counsel of Record https://www.supremecourt.gov/DocketPDF/16/16-1275/55620/20180726162704872_Virginia%20Uranium%20-%20Merits%20Amicus%20Brief%20-%2007.26.2018.pdf

According to the National Academy of Science Study: “There is no federal law that specifically applies to uranium mining on non-federally owned lands; state laws and regulations have jurisdiction over these mining activities. Federal and state worker protection laws, and federal and state environmental laws, variously apply to occupational safety and health, and air, water, and land pollution resulting from mining activities.” See: “Uranium Mining in Virginia: Scientific, Technical, Environmental, Human Health and Safety, and Regulatory Aspects of Uranium Mining and Processing in Virginia” (2012) https://www.nap.edu/read/13266/chapter/2 The National Academy of Science also warns of the additional risks with uranium mining in Virginia because it is such a wet climate.

This case will have broader implications, both within the United States, and even within other Common Law jurisdications, because of the use of judicial precedents. This includes most, if not all, of the English speaking world. This case could end up being quoted within Britain, Canada, or Australia, for instance, and many other countries: https://en.wikipedia.org/wiki/List_of_national_legal_systems#Common_law .

It is important to understand that the real subversives are these three Senators, and a Republican lobbying firm, BGR Group, which helped Uranium One with the CFIUS process, selling US uranium mines to Russia: https://miningawareness.wordpress.com/2018/05/24/canadian-mining-company-tries-to-force-uranium-mining-on-virginia-trump-admin-gives-support-to-uranium-mining-co-case-to-be-heard-by-us-supreme-court/

Additionally, BGR Group has represented Russian Alfa Bank for a very long time. They are also representing Letter One Holdings, which like Alfa Bank is connected to Russian oligarch Mikhail Fridman: https://soprweb.senate.gov/index.cfm?event=getFilingDetails&filingID=52938D15-DDCC-4B3A-9700-D3128D59BEAB&filingTypeID=69 https://en.wikipedia.org/wiki/LetterOne

CNN as quoted on Cruz web site re marriage and states’ rights: https://archive.is/https://www.cruz.senate.gov/?p=news&id=2241

NB: Virginia is technically “The Commonwealth of Virginia” but calling it that could create confusion for some readers.