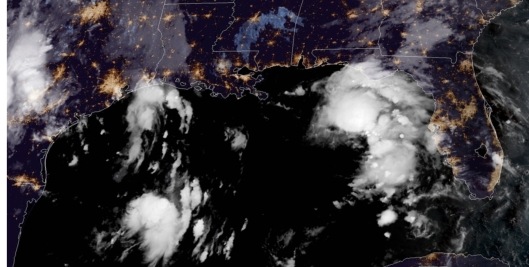 Remember to go to the national hurricane center, weather.gov and your preferred local weather for the most up to date weather statements.
From the 4 AM Advisory: “RAINFALL: Gordon is expected to produce total rain accumulations of 4 to 8 inches over the western Florida Panhandle, southwest Alabama, southern and central Mississippi, southeastern and northeastern Louisiana, and southern Arkansas, with isolated maximum amounts of
12 inches through late Thursday. This rainfall will cause flash flooding across portions of these areas.

TORNADOES: A few tornadoes are possible this afternoon through tonight near the coasts of Mississippi, Alabama, and the Florida Panhandle. (See entire advisory-discussion further below) 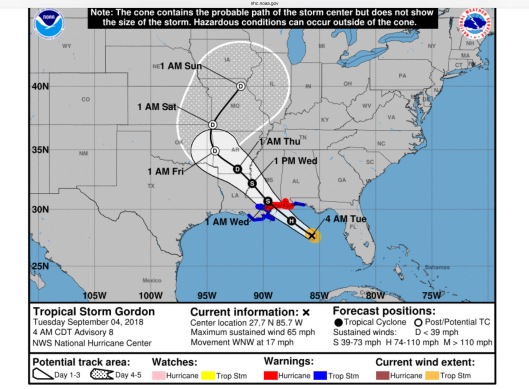 Tropical Storm Gordon and nuclear power stations (orange skulls). One of the most dangerous things about nuclear energy is that nuclear power stations always have need for backup energy supplies for cooling of the nuclear reactors, and spent fuel pools. If they lose offsite power, then they are dependent upon backup generators, which can fail to start, fail once started or run out of fuel. In Louisiana, a routine thunderstorm led to a scram at River Bend Nuclear Power Station due to a power surge, followed by a loss of cooling, supposedly the next day. Grand Gulf is of a similar design. Loss of cooling can lead to a nuclear meltdown, if not corrected quickly enough. It doesn’t take a hurricane. See more here: https://miningawareness.wordpress.com/2018/09/03/tropical-storm-watch-for-us-gulf-coast-2-am-update-reminder-of-the-dangers-of-mixing-severe-weather-with-nuclear-power-another-tropical-storm-in-atlantic/

Remember the risk of heavy rain and the possibility of spin-off tornados, even where the tropical storm itself may have wind speed that is not very high.

WATCHES AND WARNINGS
——————–
CHANGES WITH THIS ADVISORY:

SUMMARY OF WATCHES AND WARNINGS IN EFFECT:

A Tropical Storm Warning is in effect for…
* West of the Mouth of the Pearl River to east of Morgan City,
Louisiana, including Lake Pontchartrain and Lake Maurepas
* Alabama-Florida Border to Okaloosa-Walton County Line

A Storm Surge Warning means there is a danger of life-threatening
inundation, from rising water moving inland from the coastline,
in the indicated locations. For a depiction of areas at risk, please
see the National Weather Service Storm Surge Watch/Warning Graphic,
available at hurricanes.gov. This is a life-threatening situation.
Persons located within these areas should take all necessary actions
to protect life and property from rising water and the potential for
other dangerous conditions. Promptly follow evacuation and other
instructions from local officials.

A Storm Surge Watch means there is a possibility of life-
threatening inundation, from rising water moving inland from the
coastline, in the indicated locations.

A Hurricane Warning means that hurricane conditions are expected
somewhere within the warning area. Preparations to protect life
and property should be rushed to completion.

A Tropical Storm Warning means that tropical storm conditions are
expected somewhere within the warning areas.

DISCUSSION AND OUTLOOK
———————-
At 400 AM CDT (0900 UTC), the center of Tropical Storm Gordon was
located near latitude 27.7 North, longitude 85.7 West. Gordon is
moving toward the west-northwest near 17 mph (28 km/h). A
west-northwestward to northwestward motion with some decrease in
forward speed is expected over the next few days. On the forecast
track, the center of Gordon will move across the eastern Gulf of
Mexico today, and will approach the north-central Gulf Coast within
the warning area late this afternoon or evening, and move inland
over the lower Mississippi Valley tonight or early Wednesday.

Maximum sustained winds are near 65 mph (100 km/h) with higher
gusts. Strengthening is expected today, and Gordon is forecast to
be a hurricane when it makes landfall along the north-central Gulf
Coast. Rapid weakening is expected after Gordon moves inland.

Tropical-storm-force winds extend outward up to 60 miles (95 km)
from the center.

STORM SURGE: The combination of a dangerous storm surge and the
tide will cause normally dry areas near the coast to be flooded by
rising waters moving inland from the shoreline. The water could
reach the following heights above ground somewhere in the indicated
areas if the peak surge occurs at the time of high tide…

The deepest water will occur along the immediate coast near and to
the east of the landfall location, where the surge will be
accompanied by large waves. Surge-related flooding depends on the
relative timing of the surge and the tidal cycle, and can vary
greatly over short distances. For information specific to your area,
please see products issued by your local National Weather Service
forecast office.

RAINFALL: Gordon is expected to produce total rain accumulations of
4 to 8 inches over the western Florida Panhandle, southwest Alabama,
southern and central Mississippi, southeastern and northeastern
Louisiana, and southern Arkansas, with isolated maximum amounts of
12 inches through late Thursday. This rainfall will cause flash
flooding across portions of these areas.

WIND: Tropical storm conditions are expected to begin this
afternoon within portions of the warning area, with hurricane
conditions expected by this evening in the hurricane warning
area.

TORNADOES: A few tornadoes are possible this afternoon through
tonight near the coasts of Mississippi, Alabama, and the Florida
Panhandle.

Gordon has changed little in organization on geostationary
satellite images or on the WSR-88D radar presentation over the past
several hours. The storm has a small CDO with convective banding
features primarily over the eastern semicircle of the circulation.
Overall the cloud pattern is indicative of moderate westerly shear
over the system, likely associated with an upper-level trough near
the central Gulf of Mexico. An Air Force Reserve Unit Hurricane
Hunter aircraft investigated Gordon a few hours ago and reported
maximum SFMR-measured surface winds of 54 kt. On this basis the
intensity had been adjusted to 55 kt, which is somewhat above the
latest Dvorak estimates. It is assumed that the shear will not be
strong enough to inhibit at least some strengthening before
landfall, so the tropical cyclone is still forecast to become a
hurricane later today. The official forecast, prior to landfall, is
close to the latest LGEM intensity guidance, and near the upper end
of the guidance suite. Gordon should weaken rapidly after landfall
in the lower Mississippi Valley region.

The motion continues west-northwestward, or 300/15 kt. There is
little or no change to the NHC track prediction or forecast
reasoning from the previous advisory. Gordon is expected to move
along the southwestern periphery of a mid-level high pressure area
and make landfall along the north-central Gulf of Mexico coast
within 24 hours. After landfall, the cyclone is forecast to move
northwestward, along the western side of the high, at a reduced
forward speed. Late in the forecast period Gordon, or its
post-tropical remnant, should turn northward to north-northeastward
as it approaches the mid-latitude westerlies. The official track
forecast is near the model consensus and very close to the previous
NHC track.

1. Gordon is expected to bring life-threatening storm surge and
hurricane conditions to portions of the central Gulf Coast where a
Storm Surge Warning and Hurricane Warning are in effect. Residents
in these areas should listen to advice from their local officials.
All preparations to protect life and property should be rushed to
completion, as tropical storm conditions are expected to arrive in
the warning areas this afternoon.

2. Heavy rainfall from Gordon will affect the western Florida
Panhandle, southern Alabama, southern Mississippi and Louisiana,
where totals could reach as high as 12 inches. This rainfall could
cause flash flooding.