Who are these “hundreds” of “bikers” hanging out with Trump? Is Spetsnaz Motorcycle club connected to them? Spetsnaz MC was formed in Florida just before Trump announced his candidacy. The description of Spetsnaz MC calls to mind alleged Russian Agent Maria Butina’s gun group “Right to Bear Arms” and the NRA relationship. Spetsnaz is the name for Russia Special Forces. Historically, Spetsnaz “referred to special military units controlled by the military intelligence service GRU (Spetsnaz GRU)“. https://en.wikipedia.org/wiki/Spetsnaz
Recall Mussolini’s March on Rome with his Black Shirts, as well.

The president of the Spetsnaz Motorcycle club is listed as a Broward County Florida Sheriff’s Office Detective, named German Bickbau. According to the Miami Herald, Bickbau wrote in 2014 asking to form an affiliate of the infamous pro-Putin Russian Night Wolves Motorcycle Club-Gang. Bickbau is apparently a Russian-American, based on the article and a quick search. Also listed is Svyatoslav Mangushev who, according to the Miami Herald, is “a Russian intelligence officer turned Miami real-estate investor.” (Miami Herald, 22 June 2017). This Florida-Russian motorcycle club was officially formed on 5/14/16 and Trump declared his candidacy on 6/16/16. Broward Sheriff’s Office Detective Bickbau resigned as president of MC Spetsnaz and the club was dissolved on June 20, 2017, two days before the article appeared and probably subsequent to the Miami Herald authors asking for comment. Miami Herald still has real journalists! Roger Stone’s stepson is also a Broward Co. Detective. 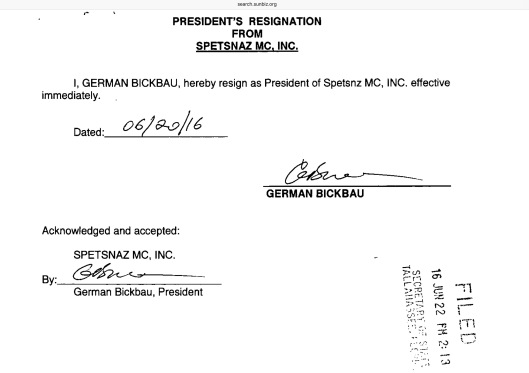 SHABUROV, ALEXEY currently listed as owner of a Condo at the Trump Hollywood address, 2711 S. Ocean Beach Drive (https://floridaparcels.com/property/16/514224CE1840) was listed as the treasurer of the Spetsnaz Motorcycle Club. Trump Hollywood is still listed on the Trump org web site so there must still be some connection between Trump Hollywood and the Trumps (at least licensing fee). Although valued at $2.5 million the condo appears to have sold for 100 dollars in November of 2016, if we understand the site correctly. It had sold in December of 2011 for a little over $2 million. Again in March of 2011, it sold for $100.00. More details at the above link.

“Outlaw Motorcycle Gangs
Historically, when compared to street or prison gangs, OMGs were perceived an overall lower threat to public safety within US communities, primarily due to lower OMG membership numbers. OMGs represent approximately 2.5 percent of gang members in the United States based on survey reporting. In regions of the United States where OMGs are attempting to expand into rival territory, the threat posed by OMGs increases. Law enforcement officials in the US Southwest, Mid-Atlantic, and Northwest regions indicate that OMGs present a significant threat.

However, when asked to identify the top ten worst or most problematic gangs in their respective jurisdictions, survey respondents identified OMGs first over street and prison gangs higher than their membership numbers would indicate….”
https://www.fbi.gov/file-repository/stats-services-publications-national-gang-report-2013

“The Night Wolves biker group had its members serve in the Crimean self-defense forces as early as February 2014, which supported local Crimeans against the Government of Ukraine.  In March 2014, the Night Wolves conducted intimidation and criminal activities within Ukraine and also abducted and subsequently assaulted a Ukrainian Border Guard official.  This biker group also participated in the storming of the gas distribution station in Strikolkove and the storming of the Ukrainian Naval Forces Headquarters in Sevastopol.  In early-April 2014, the Night Wolves helped smuggle a former senior Ukrainian official out of Ukraine and also helped obtain Russian passports for another larger group of senior Ukrainian officials that they helped get into Russia.  The Night Wolves have been closely connected to the Russian special services, have helped to recruit separatist fighters for Donetsk and Luhansk, Ukraine, and were deployed to the cities of Luhansk and Kharkiv.  The Night Wolves group is being designated because it is an entity that is responsible for or complicit in, or has engaged in, directly or indirectly, actions or policies that threaten the peace, security, stability, sovereignty, or territorial integrity of Ukraine.” “Treasury Targets Additional Ukrainian Separatists and Russian Individuals and Entities“, 12/19/2014 , https://www.treasury.gov/press-center/press-releases/Pages/jl9729.aspx

p. “22 National Gang Intelligence Center
UNCLASSIFIED
(U) Definition: OMGs are ongoing organizations, associations or groups of three or more persons with a common interest or activity characterized by the commission of, or involvement in, a pattern of criminal conduct. Members must possess and be able to operate a motorcycle to achieve and maintain membership within the group.

(U) The Hells Angels Motorcycle Club, Pagans, Vagos, Sons of Silence, Outlaws, Bandidos, and Mongols are the largest OMGs. All are classified as “one percent” (1%) clubs. The term 1% originated when the American Motorcycle Association released a statement in response to a riot that occurred on 4 July 1947 at the Dirt Hill Climb motorcycle races in Hollister, California. The American Motorcycle Association spokesperson stated that 99 percent of the motorcycling public was comprised of honest, law-abiding citizens, and that only one percent constituted troublemakers. OMGs took pride in the reference and adopted 1% as its symbol. Not all OMG members boast the symbol; however, OMGs profess to be one percenters or the one percent of bikers who have rejected societal norms and dedicated their lives to their club.

(U) Motorcycle gangs have evolved over the past 67 years from bar room brawlers to sophisticated criminals. OMGs, which were formed in the United States, over the last 50 years have spread internationally and today they are a global phenomenon. The Hells Angels in particular stands out for its international connectivity. Survey respondents identify Hells Angels members, more than any other OMG, as having the most international travel within the last two years.

(U) Ownership of motorcycles has created a growth industry that accommodates thousands of legitimate recreational riders throughout North America. Increasing societal acceptance of motorcycle riders has provided OMGs a way to camouflage their gangs’ nefarious criminal activities. The larger, more sophisticated OMGs, such as the Hells Angels, Iron Horsemen, Outlaws, Bandidos, Mongols, Pagans, Sons of Silence, and the Vagos have adopted the public posture of claiming they are just motorcycle riders who belong to a club. The other part of the subterfuge lies with their claim that the criminal activities of individual members are not directed by the gang. Other gangs claim their violent reputation is due to criminal activities in their past…” https://www.fbi.gov/file-repository/national-gang-report-2015.pdf

Why isn’t the NYT digging deeper than this?
“Trump’s War With Harley-Davidson Has Divided America’s Bikers” The New York Times  https://www.nytimes.com/2018/08/11/business/us-bikers-harley-davidson.html

“Meet the Vigilantes Who Patrol Trump’s Rallies From Lions of Trump to Bikers for Trump, these volunteer watchdogs have become the Donald’s security forces—and they plan to follow him to the convention. By BEN SCHRECKINGER April 25, 2016 https://www.politico.com/magazine/story/2016/04/donald-trump-2016-vigilante-security-213847

This article in the Hill describes the arrival of 100 “Bikers for Trump” as “spontaneous”:
“Trump, Cruz and Carson ‘Tea Party’ down South” BY JIM MILLS – 01/21/16 02:00 PM EST http://thehill.com/blogs/pundits-blog/presidential-campaign/266581-trump-cruz-and-carson-tea-party-down-south

Roger Stone helped to get the Broward Sheriff elected. He had apparently opposed him in the past:
“Broward sheriff, ‘dirty trickster’ forge unlikely tie” http://www.sun-sentinel.com/news/fl-roger-stone-sheriff-israel-20140809-story.html Worth recalling that Trump and Stone’s friend Roy Cohn worked with Democratic machines on the local level and Reagan on the national level.