Link: https://youtu.be/5h3hSTC9ybs
In this two minute video, Baria talks about losing everything to Hurricane Katrina and building back, as well as some other things.

MA Blog Comment:
Baria may be onto something when he says in the video that Howard Sherman is a multimillionaire from Beverly Hills who has found “a new toy to play with; that toy is Mississippi“. However, this blogger continues to suspect something more nefarious, which is why this blog has been after Sherman like a duck on a June bug. Hopefully Mueller is too. If Mueller’s doing his job, then he has to investigate De Niro, which is probably why De Niro started cursing Trump. If Mueller has or is investigating De Niro, then he has to look at Howard Sherman too: https://miningawareness.wordpress.com/2018/06/12/robert-de-niro-shares-russian-business-partners-with-trump-agalarovs-de-niro-tampering-in-mississippi-elections-to-make-democrats-lose-us-senate-seat Lurking in the back of my mind, remains a sales clerk from Jackson Mississippi in the late 1970s… Asked what the difference was between Levis straight jeans and California straight jeans, he replied that the California jeans were less straight, because nothing is as straight in California. As the last stop in the constant movement westward, in many ways California may be the most American of all. But, non-Californians don’t tend to see it that way. Baria could beat Wicker in Mississippi, but Sherman can’t. And, what happens if September, or later, finds both Wicker and Sherman in trouble in the Mueller investigation?

It could simply be that Sherman’s just crazy as a Betsy bug and got money to throw. Although the following calls the loans “other”, if you click on the details it says personal funds. The mystery remains of what Sherman wants so bad that he’s willing to pay $650,000 to get it? Plus he gave $10,000 to his would-be Republican opponent, Roger Wicker, less than a year ago: 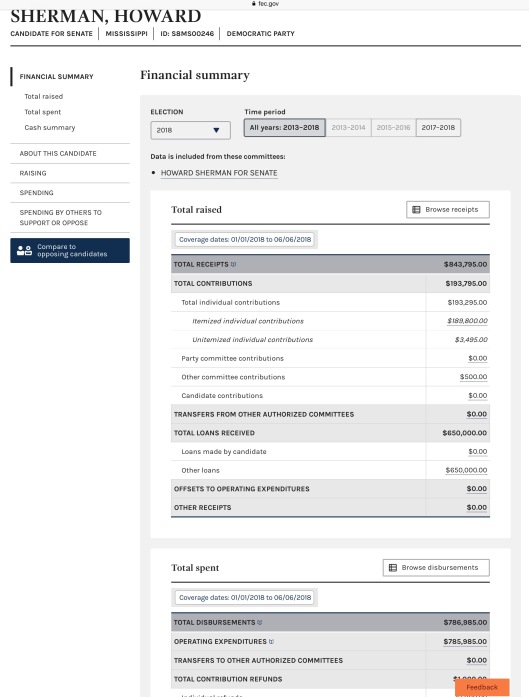