https://www.dhs.gov/immigration-statistics/yearbook/2015/table1
Via https://en.wikipedia.org/wiki/Immigration_to_the_United_States
Shockingly, in recent decades, less than 10% of immigrants have been refugees. The first step in helping refugees should be to stop supporting policies that create more (e.g. repressive governments, land grabs, mining, militarism). Then the question becomes if the immigration should be permanent or effort made to help people repatriate.

Over the last half century, due to the government’s insane immigration policy, the country has become visibly crowded to the detriment of the environment, quality of life, and quality employment. If there is any one reason that Trump won, that is surely it, unless Russia did manipulate the voting machines. Russians are better students of American life than American politicians and probably told him what to say.

Just this year the US has lost a lot of housing stock from hurricanes and fires. Insurers may cease to cover at-risk areas where many Americans live. And, large swaths of land will be lost in the event of a nuclear disaster, which is imminent due to the shoddy condition of the nuclear power stations and nuclear waste cans. And, yet, the US apparently will still admit approximately one million legal immigrants in this year alone, perhaps more!

Insanely, Affirmative Action/Minority Set Asides aren’t just for those whose ancestors suffered discrimation, which does include earlier generations of Asian Americans, but new arrivals benefit. Thus, immigrants from India and China – which comprise a huge chunk of the world population, and a growing one, get to immigrate to the USA and get affirmative action and minority set asides meant to rectify historic wrongs against US minorities and women.

As Martin Luther King pointed out shortly before he was assassinated , (see starting ca 22 min http://youtu.be/RMLyhshxQc8 ), and as is still the case today, after the Civil War the US government favored recently arrived immigrants over black people who have been in America for hundreds of years. Someone from India or China, the most populous countries in the world, can come to the US and claim minority status and get government subsidies meant to help black people and women, as has been the case for Holtec’s Kris Singh with his flimsy nuclear waste canisters. Insanely, Affirmative Action/Minority Set Asides isn’t just for those whose ancestors suffered discrimation, which includes earlier generations of Asian Americans, but new arrivals, such as Holtec’s Singh, benefit.

America has also been diverse for a very long time. It has always been more diverse than most have admitted; was more diverse in the late 1800s; more diverse in the early 1900s; and if it wasn’t diverse enough there has been a population dumping from overpopulated countries over the last half century such that there can be no excuse for doubting the fact other than willful blindness.

While there is some merit in the idea of immigrant lottery, winning a slot should be a very rare event and all expenses paid so as to give the poor a chance. There is no merit to merit-based immigration because there are plenty of talented people already in the USA. That leaves asylum seekers-refugees, for whom the US probably isn’t doing enough. Permanent immigration should be limited to true refugees and spouses of Americans. No more piggy-backing in of family members should be allowed either with the possible exception of care-giving purposes. Piggy-backing in of siblings is what gave the world Trump – his mother’s sister had already migrated. Foreign students can still be welcomed but return home afterwards.

In the past there was the concept of melting pot. Earlier arrivals tended to be refugees and transportation was difficult and costly, and communications difficult.

In stark contrast, less than 10% of legal US immigrants over the last decades have been refugees.

The US has admitted so many legal immigrants who already have a home and just want to immigrate, that Americans find themselves both unemployed and even unable to get entrance papers for their foreign spouses because the entire system is so knotted up due to people who have no need of being in the country that moving the case forward requires a good lawyer and one suspects bribery.

Where are Americans supposed to go? Only recent immigrants and those from certain countries have right of return to their indigenous homeland(s).

Where are they supposed to work? How to pay off the student loans for their degrees?

For too long politicians have pandered to idea of “growth machine” and immigration-based machine politics. For over 150 years politicians have seen more immigrants as more votes. And, the more people in a country the less each vote counts. Growth Machine politics is environmentally and socially untenable over time. 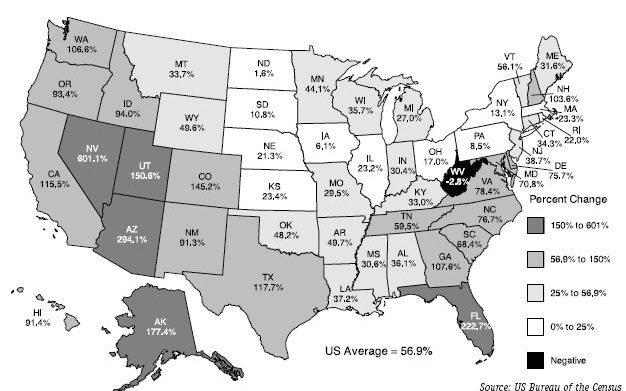