Tropical Storm Jose Offshore Massachusetts
Last December, Jones River Watershed Association and JRWA’s Cape Cod Bay Watch Program once again raised concerns about flooding and storm impacts on Pilgrim Nuclear Power Station on Cape Cod Bay in Massachusetts, writing to the US NRC: “We continue to believe that the PNPS site, including its nuclear waste storage area, are at risk from flooding and storms…“. They point to discrepancies between the site elevation data used by Entergy and actual elevation when estimating flood risk at the Pilgrim Nuclear Power Station. (The US NRC appears to consistently use the 1929 elevation standard, rather than the 1988 update which takes into consideration subsidence and other changes which have occurred since 1929. Thus, their concerns may apply to most US Nuclear Power Stations.) Furthermore, they point to the use of outdated sea level assumptions, which fail to take into consideration sea level rise! They point out that each tidal epoch is 18 years and that the “previous 1960-1978 epoch was the information used when PNPS was first developed…. The 1983-2001 is the present epoch and shows a rise in sea level. Local present day tide charts are based on this. We are nearly done with the third epoch (2002-2020), when information will be brought to reflect present day conditions.” Read their letter to the US NRC below (Emphasis our own.): 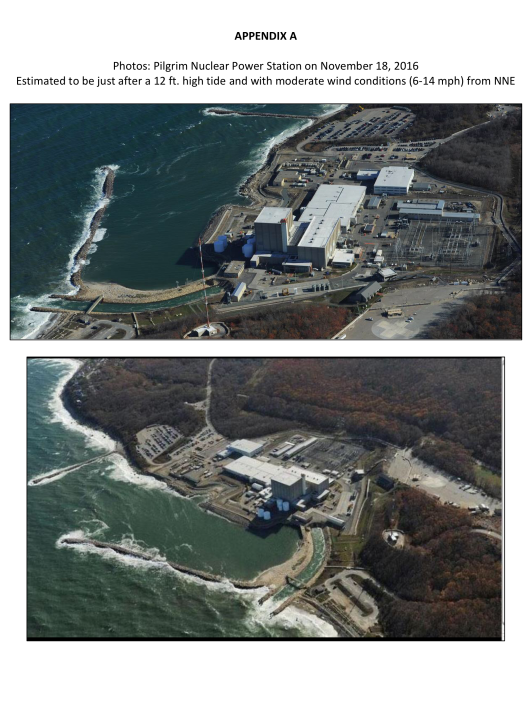 Is Pilgrim at Risk of Flooding from Jose? The major risk seems to be loss of offsite power due to winds (LOOP), though it remains unclear. Our guess is that the nuclear power station is not considered an “ocean exposed beach” since it sits on Cape Cod Bay though the screen-shot forecast for the area includes high surf advisory. However, it doesn’t say if it is the 15 to 20 ft discussed further below.

“Jose will bring large waves, possibly 15 to 20 feet, to ocean exposed beaches across southeast Massachusetts. Severe beach erosion will occur. Some protective dunes may be at risk of being overtopped or eroded away. Dangerous rip currents will occur at the beaches. With Jose forecast to stall just southeast of the region, the threat of beach erosion and rip currents will be prolonged, likely lasting through the upcoming weekend and perhaps even into early next week. High Surf Advisories are in effect for ocean-exposed beaches outside of the Tropical Storm Warning. * WIND: The strongest winds from this storm event will be from Thursday morning through Thursday night across Cape Cod and the Islands. Gusts to 60 mph are forecast for Nantucket and Martha`s Vineyard with 45 to 55 mph on Cape Cod. Potential impacts in these areas include: – Possible tree limbs broken off with some trees uprooted. – Some roads impassable from large debris, and more within heavily wooded places.”
https://alerts.weather.gov/cap/wwacapget.php?x=RI12586888BA6C.HurricaneLocalStatement.125868959124RI.BOXHLSBOX.959847dcf070ef0cf9164c11629f7113