Yesterday, one of President Trump’s lawyers Jay Sekulow suggested on ABC’s This Week that Secret Service vetting would have prevented a “nefarious” meeting from taking place. However, the Secret Service explained that  “Donald Trump Jr. was not a protectee of the USSS in June, 2016.  Thus we would not have screened anyone he was meeting with at that time.”

The Russian-American lobbyist Rinat Akhmetshin who attended the meeting said that he “strolled into Trump Tower” and “literally walked in” without any security check.

The meeting reportedly took place on the 25th floor of Trump Tower, one floor below that of then-candidate Trump who was also reportedly at Trump Tower at that time and had a Secret Service protective detail.

In today’s letter, Cummings requested by July 31, 2017, any documents related to any vetting at Trump Tower on June 9, 2016, as well as any vetting done from June 2016 to the present for any meetings with Veselnitskaya, Akhmetshin, and Goldstone.  Cummings also requested an explanation of what the current protocols are for screening individuals, including foreign nationals, who meet with protectees in Trump Tower.” https://democrats-oversight.house.gov/news/press-releases/cummings-requests-details-from-secret-service-about-any-vetting-done-for-trump 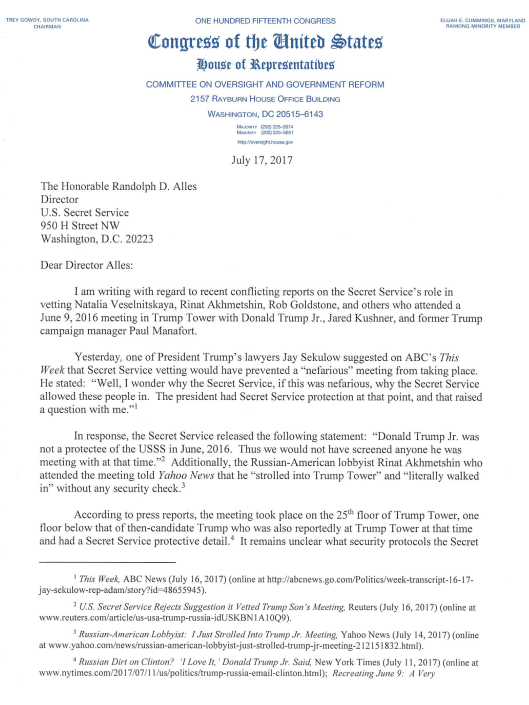