This post started as one dealing with the apparent attempt by the Trump administration to centralize voter info, which would make vote tampering easier in the future. However, this, in turn, raises the question of if Russian election tampering impacted the 2016 US election results. We have been inclined to believe that Trump won because someone, possibly Russia, told Trump what many Americans want to hear and so he told them what they want to hear (only to do mostly the opposite). However, the election was close and it is possible that tampering impacted the results. Does anyone outside of Russia and perhaps the Trump campaign know the truth?

According to expert Dr. J. Alex Halderman, Professor of Computer Science & Engineering: “This month, we’ve seen reports detailing Russian efforts to target voter registration systems in up to 39 states and to develop a capability to spread an attack from an election technology vendor to local election offices. Attacking the IT systems of vendors and municipalities. . . .

Successful infiltration of election IT systems also could have put the Russians in a position to spread an attack to the voting machines and potentially steal votes. Although the registration systems involved were generally maintained at the state level, and most pre-election programming is performed by counties or outside vendors, counties tend to be even less well defended than state governments. They typically have few IT support staff and little, if any, cybersecurity expertise.

I don’t know how far the Russians got in their effort to penetrate our election infrastructure, nor whether they interfered with equipment on election day. (As far as the public knows, no voting equipment has been forensically examined to check whether it was successfully attacked.) But there is no doubt that Russia has the technical ability to commit widescale attacks against our voting system, as do other hostile nations.” Excerpt from Professor Dr. J. Alex Halderman, Professor of Computer Science & Engineering University of Michigan, Opening Statement: https://www.intelligence.senate.gov/sites/default/files/documents/os-ahalderman-062117.pdf

Additional info became available in April and the Trump Admin classified it? Why would they want this hidden? https://www.documentcloud.org/documents/3766950-NSA-Report-on-Russia-Spearphishing.html Reality Winner is going to be tried for leaking it, but there is nothing that should be Top Secret in it.

In an earlier piece Dr. Halderman wrote:
“Want to Know if the Election was Hacked? Look at the Ballots”
“How might a foreign government hack America’s voting machines to change the outcome of a presidential election? Here’s one possible scenario. First, the attackers would probe election offices well in advance in order to find ways to break into their computers. Closer to the election, when it was clear from polling data which states would have close electoral margins, the attackers might spread malware into voting machines in some of these states, rigging the machines to shift a few percent of the vote to favor their desired candidate. . . . The only way to know whether a cyberattack changed the result is to closely examine the available physical evidence — paper ballots and voting equipment in critical states like Wisconsin, Michigan, and Pennsylvania. Unfortunately, nobody is ever going to examine that evidence unless candidates in those states act now, in the next several days, to petition for recounts.” medium.com/@jhalderm/want-to-know-if-the-election-was-hacked-look-at-the-ballots-c61a6113b0ba .

Indeed they probed in advance:
“Russian intelligence obtained and maintained access to elements of multiple US state or local electoral boards.. . . . Since early 2014, Russian intelligence has researched US electoral processes and related technology and equipment. DHS assesses that the types of systems we observed Russian actors targeting or compromising are not involved in vote tallying.” “Background to ‘Assessing Russian Activities and Intentions in Recent US Elections”: The Analytic Process and Cyber Incident Attribution, 6 Jan 2017 DID THEY CHANGE VOTES IN WAYS OTHER THAN TALLYING?

“Illinois Voter Registration System Database Breach Report
The Illinois State Board of Elections was the victim of a malicious cyber-attack of unknown origin against the Illinois Voter Registration System database (IVRS) beginning June 23, 2016. Because of the initial low volume nature of the attack, SBE staff did not become aware of the breach until the volume dramatically increased on July 12th. At that point, SBE IT immediately took measures to stop the intrusion. In the following weeks, SBE staff worked to determine the scope of the intrusion, secure databases and web applications, comply with state law regarding personal information loss, and assist law enforcement in their investigation of the attack. 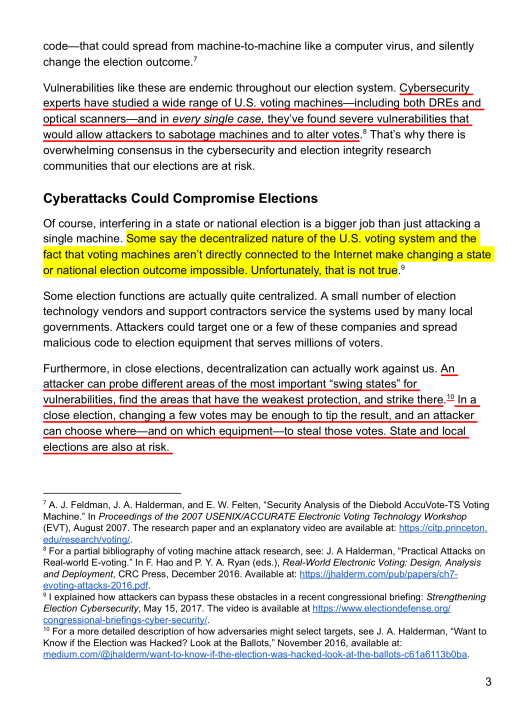 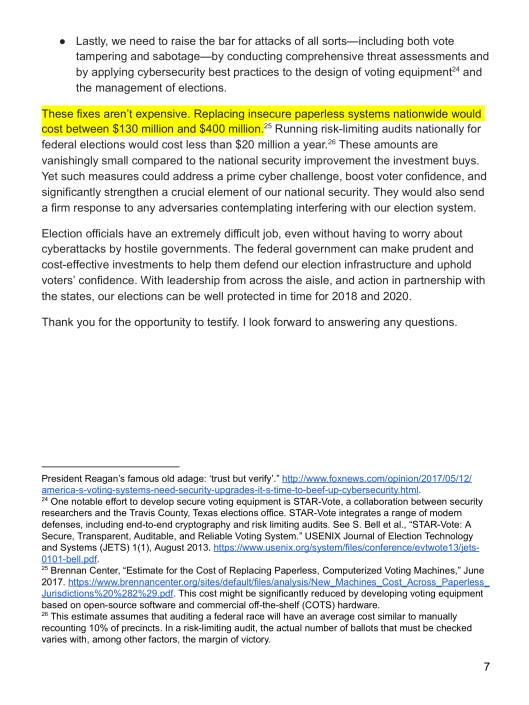 This and more:
06/21/2017 – 9:30am
Open Hearing: Russian Interference in the 2016 U.S. Elections
https://www.intelligence.senate.gov/hearings/open-hearing-russian-interference-2016-us-elections

EMPHASIS OUR OWN THROUGHOUT.