Trump didn’t just promise them weapons but the technical know-how/ specifications to make their own smart bombs, etc. https://miningawareness.wordpress.com/2017/06/08/trump-defense-assembly-jobs-for-saudis-technical-specifications-to-saudis-so-they-can-attack-the-us-at-a-future-date-with-smart-bombs-etc-a-few-republican-and-democratic-congress-members-objec/ The info below suggests that Trump may want them to have their own nuclear weapons, as well. First Russian Nuclear power stations, and then nuclear bombs. The Newsweek article discusses a Jeff Sessions tie-in, mentioned in the letter.

Washington, D.C. (June 19, 2017)—Today, Rep. Elijah E. Cummings and Rep. Eliot L. Engel, the Ranking Members of the House Committee on Oversight and Government Reform and the House Committee on Foreign Affairs, sent a letter requesting documents relating to the work of former National Security Advisor Michael Flynn regarding Saudi Arabia, Russia, and other countries, as well as his failure to accurately report his foreign travel and contacts when he submitted an application to renew his security clearance in 2016 and was interviewed by security clearance investigators.

On June 9, Newsweek reported that Flynn traveled to the Middle East in the summer of 2015 on behalf of X-Co Dynamics Inc./IronBridge Group to promote a “harebrained” and “fantastical plan for a joint U.S.-Russian (and Saudi-financed) program to get control over the Arab world’s rush to acquire nuclear power.”  The article reported that “the genius idea” developed by the Americans “was a U.S.-Russian partnership to build and operate plants and export the dangerous spent fuel under strict controls.”  The Saudis would recoup their costs by selling energy to other Middle East countries, which in turn would buy “Russian military hardware” to substitute for Russian profits from “military sales to Iran.”

Soon after Flynn reportedly took this trip, Saudi Arabia announced an agreement with Russia’s state nuclear corporation, Rosatom, that resulted in a $100 billion deal in 2016 to build 16 nuclear power units.

“In contrast to this report, we have no record of General Flynn reporting this trip or any contacts with foreign officials on his security clearance renewal application or in his interview with security clearance investigators,” Cummings and Engel wrote.

“If this press report is accurate, General Flynn’s failure to report this trip and any contacts with foreign government officials about this Saudi-Russian nuclear proposal appears to be a potential violation of 18 U.S.C. § 1001,” the Ranking Members wrote.  The statute provides that knowingly falsifying or concealing a material fact is a felony which may result in fines and/or up to five years imprisonment.

Flynn reported a later trip to the Middle East on his security clearance renewal application—to Saudi Arabia in October 2015—but “omitted key details,” according to the Ranking Members.  “He reported that he traveled to Saudi Arabia with a friend for six days to speak at a conference, that he stayed at the King Khaled International Hotel, and that his expenses were paid by a ‘work sponsor.’

Cummings and Engel raised questions about the possible effect of these undisclosed foreign interests on Flynn’s actions as National Security Advisor.

“Saudi Arabia was the first foreign country that President Trump visited,  the Trump Administration recently concluded an arms deal with Saudi Arabia reportedly worth $350 billion over ten years, and the President’s hotel in Washington D.C. received approximately $270,000 in payments linked to Saudi Arabia while that country has continued to press for limiting the rights of U.S. citizens to sue the Saudi government,” the Ranking Members wrote.  “It is unknown what advice or input General Flynn may have offered relating to these matters, if any.” 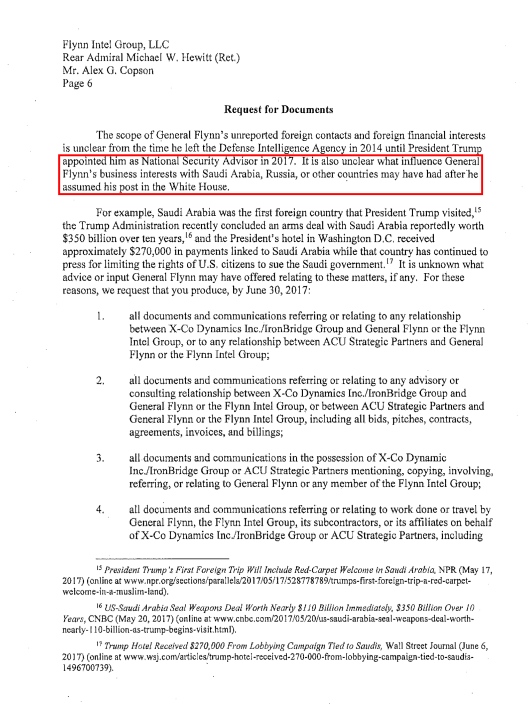 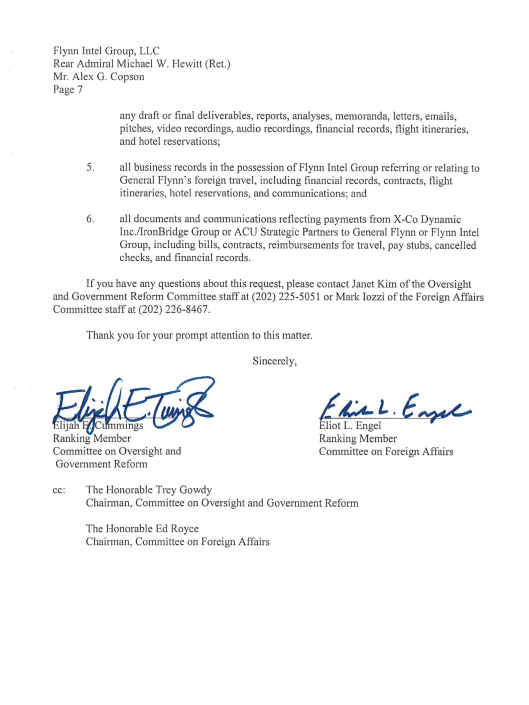