Former Exxon Mobil CEO Rex Tillerson has not yet been approved as Secretary of State, though his nomination passed before the US Senate Monday afternoon (today). Final vote expected late Tuesday or Wednesday.. He did pass the Senate Foreign Relations committee. How did Rubio and McCain lose their ethical qualms regarding Tillerson’s friendship with Russian President, former KGB agent, Putin? Maybe Rubio’s ready to go back to Cuba since Fidel Castro’s dead?
“ O would, ere I had seen the day
That Treason thus could sell us,
…. We’re bought and sold for Exxon gold-
Such a parcel of rogues in a nation!”
(Burns, 1791, modified)

Rex Tillerson Personal Donations 2016 only, and hence incomplete. However, this gives an idea the problem. 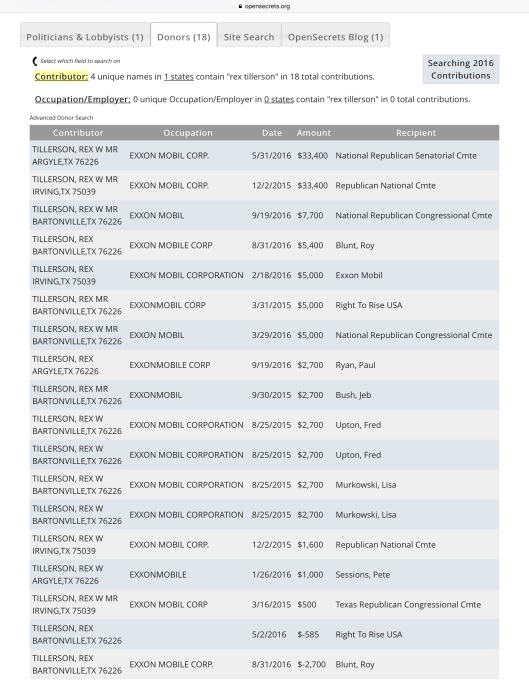 He donated to the National Republican Senatorial Cmte, which in turn donated to Republican Senators. Thus, he can claim his donations went to any of the recipients – getting more for less. All Republican Senators should really recuse themselves on his confirmation vote, and certainly those on the donor lists! Tillerson and Exxon-Mobil should also be investigated for possible sanctions violations at their deepwater Sakhalin project in Russia.

There were also Exxon Mobil donations from Exxon Mobil PACs and Exxon Mobil owners-employees and their families. The donation to Trump is probably pocket change for him – $22,131. However, Senators generally get smaller donations. Exxon Mobil PACs etc. gave $50,136 to the Senate Foreign Relations Committee.

So, did Tillerson and Exxon Mobil buy Rubio’s, McCain’s and other’s votes? It certainly looks like it. Exxon Mobil (PACs, employees, owner) direct donation to Rubio was $17,701 and to McCain $10,000. Tillerson gave to the National Republican Senatorial Cmte, which in turn gave $46,800 each to Rubio, McCain and some others. However, Rubio, McCain and Trump share mega-donors in the form of Sheldon and Miriam Adelson, but how this plays in with Exxon Mobil is hypothetical and must be for later. 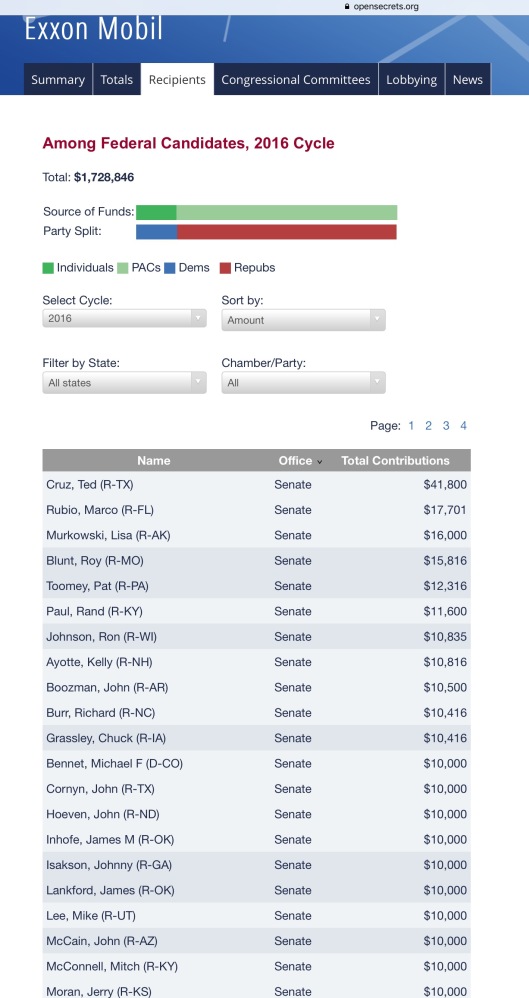 This table lists the top donors to this candidate in the 2015-2016 election cycle. The organizations themselves did not donate, rather the money came from the organizations’ PACs, their individual members or employees or owners, and those individuals’ immediate families. Organization totals include subsidiaries and affiliates. https://www.opensecrets.org/orgs/congcmtes.php?id=D000000129&cycle=2016

There needs to be more recusal in government, especially Federal and State: “Outside the judicial system, the concept of recusal is also applied in administrative agencies. When a member of a multi-member administrative body is recused, the remaining members typically determine the outcome. When the sole occupant of an official position is recused, the matter may be delegated to the official’s deputy or to a temporarily designated official; for example, when the Solicitor General of the United States is recused from a case, the Deputy Solicitor General will handle the matter in his or her place./. Concepts analogous to recusal also exist in the legislative branch. The rules of the United States Senate and House of Representatives provide that a Member should not vote on a measure as to which he or she has a personal financial interest. In such cases, the Senator or Representative may record a vote of “present” rather than “yea” or “nay“. https://en.wikipedia.org/wiki/Judicial_disqualification Local government seems more likely to practice recusal, perhaps because conflicts of interest are more apparent and campaign donations smaller – though it’s an educated gues – we’ve no statistics on recusal. However, with the large campaign donations many in Congress need to be in an almost constant state of recusal due to conflicts of interest.

Subsequent to the Parliament of Scotland selling Scotland to England in 1707, many Scots were forced abroad to Ireland and the Caribbean, and then the US and Canada, and later to Australia, following various clearances and uprisings. Where will Americans with no right to have secondary citizenships flee now? Who will protect Americans abroad if they are oppressed by dictators close to Tillerson or his dictator-friend(s)? How about Americans in eastern Europe, for instance, if Putin rolls over one or more of these countries?

“Such a Parcel of Rogues in a Nation was written by the famed poet Robert Burns in 1791. He decried those members of the Parliament of Scotland who signed the Act of Union with England in 1707, some of whom were said to have been bribed. Burns contrasted their supposed treachery to the country with the tradition of martial valor and resistance commonly associated with such historic figures as Robert the Bruce and William Wallace. The poet states that he wishes to have lain in the grave with Bruce or Wallace, than have seen this treacherous sale of Scotland in his lifetime. The lyrics obliquely reference a colonization project that became known as the Darien Scheme, an unsuccessful attempt by the Kingdom of Scotland to become a world trading nation by establishing a colony called “Caledonia” on the Isthmus of Panama on the Gulf of Darién in the late 1690s. As the Darien company was backed by about a quarter of the money circulating in Scotland, its failure left the nobles and landowners—who had suffered a run of bad harvests—almost completely ruined and was an important factor in weakening their resistance to the Act of Union.”
[…]
“The song’s lyrics are in Lowlands Scots.
Fareweel to a’ our Scottish fame,
Fareweel our ancient glory;
Fareweel ev’n to the Scottish name,
Sae fam’d in martial story.
Now Sark rins over Solway sands,
An’ Tweed rins to the ocean,
To mark where England’s province stands-
Such a parcel of rogues in a nation!
What force or guile could not subdue,
Thro’ many warlike ages,
Is wrought now by a coward few,
For hireling traitor’s wages.
The English steel we could disdain,
Secure in valour’s station;
But English gold has been our bane –
Such a parcel of rogues in a nation!
O would, ere I had seen the day
That Treason thus could sell us,
My auld grey head had lien in clay,
Wi’ Bruce and loyal Wallace!
But pith and power, till my last hour,
I’ll mak this declaration;
We’re bought and sold for English gold-
Such a parcel of rogues in a nation![2]
https://en.wikipedia.org/wiki/Such_a_Parcel_of_Rogues_in_a_Nation