Lev Parnas alleges that an offer was made to drop charges against Firtash/stop Firtash’s extradition from Austria, in exchange for helping Trump. See: https://www.msnbc.com/rachel-maddow/watch/lev-parnas-untangles-dmytro-firtash-role-in-trump-ukraine-scheme-76859973858

“Beginning in 2006, the defendants [including Firtash] allegedly conspired to pay at least $18.5 million in bribes to secure licenses to mine minerals in the eastern coastal Indian state of Andhra Pradesh. The mining project was expected to generate more than $500 million annually from the sale of titanium products, including sales to unnamed “Company A,” headquartered in Chicago.”

Company A is reported to be Boeing. McKinsey was also involved as a consultant. Neither Boeing nor McKinsey figure in the indictment.

“Ukrainian Oligarch Firtash
Giuliani’s letter stated he would be accompanied in the meeting by Victoria Toensing, an attorney. She and her husband, attorney Joseph diGenova, are loyal Trump allies whose clients have included Ukrainian tycoon Dmytro Firtash.

Firtash is fighting extradition to the United States on bribery charges and federal prosecutors contend that Parnas tried to conceal $1 million he received from Firtash.

Parnas’s undated handwritten notes were produced on stationery from the Ritz-Carlton in Vienna, Austria./ The notes say Firtash’s lawyer Lanny Davis should be fired and be replaced by Toensing and diGenova. Regarding the lawyer couple, the notes also say a deal should be sealed in one to three months, either “cut a deal or get dismissed.”/ The same note says that “Firtash” is “toxic.”/ On July 23, 2019, Davis filed a document with U.S. authorities saying he no longer represents Firtash.” Excerpted from VOA/RFE/RL: https://www.voanews.com/usa/trump-impeachment/democrats-release-new-documents-giuliani-associate-ahead-impeachment-trial (See images of the Ritz notes at the bottom of our blog post)

“‘Exhibit A’: How McKinsey Got Entangled in a Bribery Case: The consultancy’s report became key evidence in a battle over the extradition of a powerful Ukrainian oligarch charged in a scheme to help Boeing. By Walt Bogdanich and Michael Forsythe Dec. 30, 2018, NYT https://archive.li/mu6av

“FOR IMMEDIATE RELEASE
Wednesday, April 2, 2014
Six Defendants Indicted in Alleged Conspiracy to Bribe Government Officials in India to Mine Titanium Minerals
A federal indictment returned under seal in June 2013 and unsealed today charges six foreign nationals, including a Ukrainian businessman and a government official in India, with participating in an alleged international racketeering conspiracy involving bribes of state and central government officials in India to allow the mining of titanium minerals.

Five of the six defendants are also charged with conspiracy to violate the Foreign Corrupt Practices Act (FCPA), among other offenses.   Acting Assistant Attorney General David A. O’Neil of the Department of Justice’s Criminal Division, U.S. Attorney Zachary T. Fardon for the Northern District of Illinois and Special Agent in Charge Robert J. Holley of the FBI’s Chicago Field Office made the announcement.

“Fighting global corruption is part of the fabric of the Department of Justice,” said Acting Assistant Attorney General O’Neil.

“The charges against six foreign nationals announced today send the unmistakable message that we will root out and attack foreign bribery and bring to justice those who improperly influence foreign officials, wherever we find them.”

“Criminal conspiracies that extend beyond our borders are not beyond our reach,” said U.S. Attorney Fardon. “We will use all of the tools and resources available to us to ensure the integrity of global business transactions that involve U.S. commerce.”

“This case is another example of the FBI’s willingness to aggressively investigate corrupt conduct around the globe” said Special Agent in Charge Holley.  “With the assistance of our law enforcement partners, both foreign and domestic, we will continue to pursue those who allegedly bribe foreign officials in return for lucrative business contracts.

”  Beginning in 2006, the defendants allegedly conspired to pay at least $18.5 million in bribes to secure licenses to mine minerals in the eastern coastal Indian state of Andhra Pradesh. The mining project was expected to generate more than $500 million annually from the sale of titanium products, including sales to unnamed “Company A,” headquartered in Chicago.

One defendant, Dmitry Firtash, aka “Dmytro Firtash” and “DF,” 48, a Ukrainian national, was arrested March 12, 2014, in Vienna, Austria. Firtash was released from custody on March 21, 2014, after posting 125 million euros (approximately $174 million) bail, and he pledged to remain in Austria until the end of extradition proceedings.

Five other defendants remain at large: Andras Knopp, 75, a Hungarian businessman; Suren Gevorgyan, 40, of Ukraine; Gajendra Lal, 50, an Indian national and permanent resident of the United States who formerly resided in Winston-Salem, N.C.; Periyasamy Sunderalingam, aka “Sunder,” 60, of Sri Lanka; and K.V.P. Ramachandra Rao, aka “KVP” and “Dr. KVP,” 65, a Member of Parliament in India who was an official of the state government of Andhra Pradesh and a close advisor to the now-deceased chief minister of the State of Andhra Pradesh, Y.S. Rajasekhara Reddy.

The five-count indictment was returned under seal by a federal grand jury in Chicago on June 20, 2013. All six defendants were charged with one count each of racketeering conspiracy and money laundering conspiracy, and two counts of interstate travel in aid of racketeering. Five defendants, excluding Rao, were charged with one count of conspiracy to violate the FCPA.

As alleged in court documents, Firtash controls Group DF, an international conglomerate of companies that was directly and indirectly owned by Group DF Limited, a British Virgin Islands company. Group DF companies include: Ostchem Holding AG, an Austrian company in the business of mining and processing minerals, including titanium; Global Energy Mining and Minerals Limited, a Hungarian company, and Bothli Trade AG, a Swiss company, for which Global Energy Mining and Minerals was the majority shareholder.

In April 2006, Bothli Trade and the state government of Andhra Pradesh agreed to set up a joint venture to mine various minerals, including ilmenite, a mineral which may be processed into various titanium-based products such as titanium sponge, a porous form of the mineral that occurs in the processing of titanium ore.

In February 2007, Company A entered into an agreement with Ostchem Holding, through Bothli Trade, to work toward a further agreement that would allow Bothli Trade the ability to supply 5 million to 12 million pounds of titanium sponge from the Indian project to Company A on an annual basis.

The mining project required licenses and approval of both the Andhra Pradesh state government and the central government of India before the licenses could be issued.  As alleged in the indictment, the defendants used U.S. financial institutions to engage in the international transmission of millions of dollars for the purpose of bribing Indian public officials to obtain approval of the necessary licenses for the project.

They allegedly financed the project and transferred and concealed bribe payments through Group DF, and used threats and intimidation to advance the interests of the enterprise’s illegal activities.  According to the indictment, Firtash was the leader of the enterprise and caused the participation of certain Group DF companies in the project. Firtash allegedly met with Indian government officials, including Chief Minister Reddy, to discuss the project and its progress, and authorized payment of at least $18.5 million in bribes to both state and central government officials in India to secure the approval of licenses for the project.

Firtash also allegedly directed his subordinates to create documents to make it falsely appear that money transferred for the purpose of paying these bribes was transferred for legitimate commercial purposes, and he appointed various subordinates to oversee efforts to obtain the licenses through bribery.  As alleged in the indictment, Knopp supervised the enterprise and, together with Firtash, met with Indian government officials. Knopp also met with Company A representatives to discuss supplying titanium products from the project. Gevorgyan allegedly traveled to Seattle and met with Company A representatives. Gevorgyan also engaged in other activities, including allegedly signing false documents, monitoring bribe payments and coordinating transfers of money to be used for bribes. Lal, also known as “Gaj,” allegedly engaged in similar activities, reported to Firtash and Knopp on the status of obtaining licenses, and recommended whether, and in what manner, to pay certain bribes to government officials.

The indictment further alleges that Sunderalingam met with Rao to determine the total amount of bribes and advised others on the results of the meeting, and he identified various foreign bank accounts held in the names of nominees outside India that could be used to funnel bribes to Rao. Rao allegedly solicited bribes for himself and others in return for approving licenses for the project, and he warned other defendants concerning the threat of a possible law enforcement investigation of the project.

The indictment lists 57 transfers of funds between various entities, some controlled by Group DF, in various amounts totaling more than $10.59 million beginning April 28, 2006, through July 13, 2010.  The indictment seeks forfeiture from Firtash of his interests in Group DF Limited and its assets, including 14 companies registered in Austria and 18 companies registered in the British Virgin Islands, as well as 127 other companies registered in Cyprus, Germany, Hungary, the Netherlands, Seychelles, Switzerland, the United Kingdom and one unknown jurisdiction and all funds in 41 bank accounts in several of those same countries. Furthermore, the indictment seeks forfeiture from all six defendants of more than $10.59 million.

This case is being investigated by the FBI’s Chicago Field Office. The case is being prosecuted by Assistant U.S. Attorneys Amarjeet Bhachu and Michael Donovan of the Northern District of Illinois and Trial Attorney Ryan Rohlfsen of the Criminal Division’s Fraud Section.  The Justice Department has worked closely with and has received significant assistance from its law enforcement counterparts in Austria, as well as the Hungarian National Police, and greatly appreciates their assistance in this matter.  Significant assistance was also provided by the Criminal Division’s Office of International Affairs.  An indictment contains only charges and is not evidence of guilt. The defendants are presumed innocent and are entitled to a fair trial at which the government has the burden of proof beyond a reasonable doubt.” https://www.justice.gov/opa/pr/six-defendants-indicted-alleged-conspiracy-bribe-government-officials-india-mine-titanium

The charges result from an investigation, which the FBI has conducted for several years, of an alleged international corruption conspiracy. Firtash’s arrest is not related to recent events in Ukraine.

Firtash, who controls Group DF, an international conglomerate of companies, remains in Austrian custody unless he meets the bail condition of posting a €125 million bond, which was set today in a Vienna court. The U.S. government will seek his extradition.
The charges are merely accusations, and the defendant is presumed innocent unless and until proven guilty.

The department has worked closely with and has received significant assistance from its law enforcement counterparts in Austria and greatly appreciates their assistance in this matter. Significant assistance was also provided by the Criminal Division’s Office of International Affairs. The Chicago Office of the FBI conducted the investigation. https://www.justice.gov/usao-ndil/pr/ukrainian-businessman-arrested-austria-us-international-corruption-conspiracy-charges

“RACHEL MADDOW
Lev Parnas untangles Dmytro Firtash role in Trump Ukraine scheme
Lev Parnas, an associate of Trump attorney Rudy Giuliani, talks with Rachel Maddow in an exclusive interview about the offer being made by indicted Kremlin-connected oligarch Dmytro Firtash to help Donald Trump in exchange for DOJ help with his criminal case in the U.S. Jan. 15, 2020” https://www.msnbc.com/rachel-maddow/watch/lev-parnas-untangles-dmytro-firtash-role-in-trump-ukraine-scheme-76859973858

Links for the following documents and more are found here: https://intelligence.house.gov/news/documentsingle.aspx?DocumentID=903 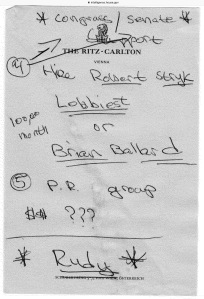 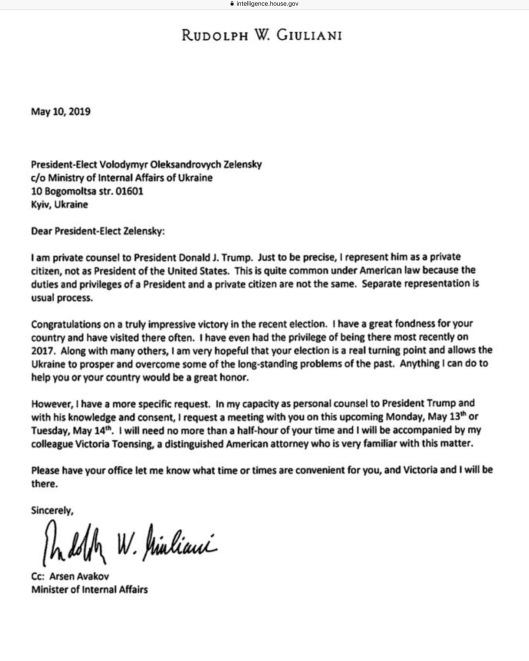