There will be more updates here: https://www.nhc.noaa.gov

Below is information which we find relevant for understanding the impacts of this storm. One thing to recall is that this storm almost always appeared bottom heavy. Earlier reports said that wind sheer kept impacting it, and perhaps this is why. There are outer rain bands, tornadoes, and high wind gusts far from the path. In this context, a lot of what the National Hurricane Center is saying appears not entirely useful.

This information is mostly a few hours old, but useful to understand the impacts. It’s easy, based on the radar, to see how the outer bands/squall lines, which are/were impacting southeast Louisiana, Mississippi, Tennessee, Arkansas, and even Alabama, were from Barry’s bottom half in the Gulf, and have spun counterclockwise to the east and will probably spin around to the north and dump rain, as indicated on the 3 day flood map. We are adding the 1 pm NHC advisory, as well.

Our primary concern was and remains the area of Killona, Louisiana, where there is Waterford Nuclear Power Station, as well as petrochemical facilities, sitting on the Mississippi River and facing Lake Ponchartrain and facing near the Bonnet Carre spillway. Thus, we include a Killona forecast, further below. If the Bonnet Carre spillway is still open, as reported, then it would be important to know the impacts of Lake Ponchartrain storm surge, in conjunction with possible river storm surge, and full moon high tides. Waterford is sitting behind a levee, and somewhat waterproof, but the levee has been under record long duress due to Trump appointee to the MRC, Richard Kaiser, refusing to open the Morganza to alleviate stress of flood waters. The Morganza was built in the early 1950s for that purpose, so people in the spillway have known they are in the spillway for almost 70 years. 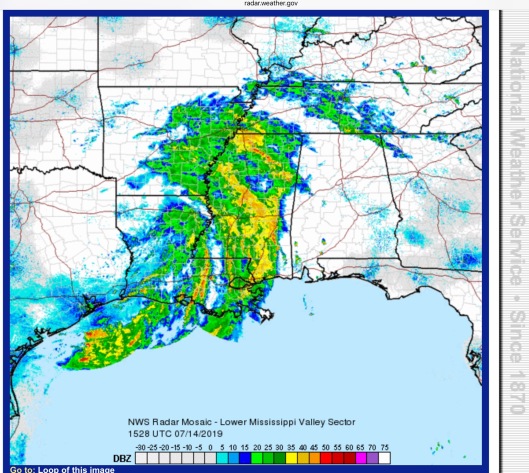 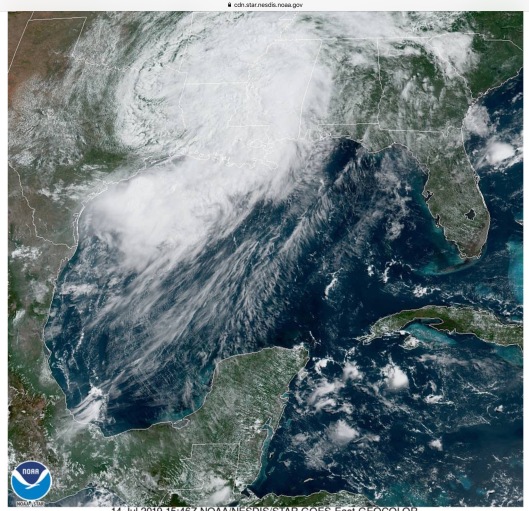 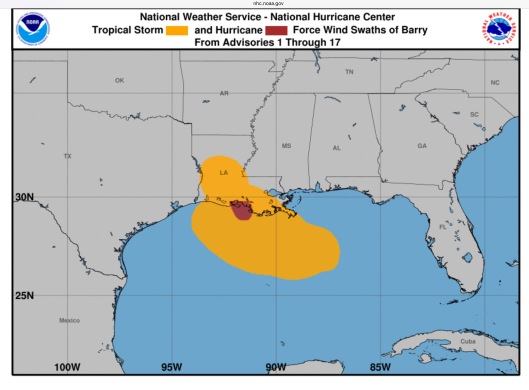 WATCHES AND WARNINGS
——————–
CHANGES WITH THIS ADVISORY…

SUMMARY OF WATCHES AND WARNINGS IN EFFECT…

A Tropical Storm Warning means that tropical storm conditions are
expected somewhere within the warning area. The Tropical Storm
Warning will likely be discontinued later this afternoon.

DISCUSSION AND OUTLOOK
———————-
At 100 PM CDT (1800 UTC), the center of Tropical Storm Barry was
located by NOAA Doppler radars and surface observations near
latitude 32.4 North, longitude 93.6 West. Barry is moving toward the
north-northwest near 9 mph (15 km/h). A general northward motion
is forecast tonight through Monday morning. A motion toward the
north-northeast and northeast is expected Monday afternoon into
Tuesday. On the forecast track, the center of Barry will move across
the northwestern portions of Louisiana today, and over Arkansas
tonight and Monday.

NOAA Doppler weather radar data and surface observations indicate
that maximum sustained winds remain near 40 mph (65 km/h) with
higher gusts. These winds are occurring near the coast well to
the southeast and south of the center. Weakening is expected as
the center moves farther inland, and Barry is forecast to weaken to
a tropical depression later today.

Tropical-storm-force winds extend outward up to 185 miles (295 km)
to the southeast of the center. A sustained wind of 41 mph (67 km/h)
and a gust to 48 mph (78 km/h) was recently reported at an NOS site
at Calcasieu Pass, Louisiana.

STORM SURGE: Water levels along the southern coast of Louisiana
are gradually receding. However, some minor coastal flooding is
still possible through today. For information specific to your
area, please see products issued by your local National Weather
Service forecast office.

WIND: Tropical storm conditions are occurring across portions of
the Tropical Storm Warning area, and these conditions will persist
through early this afternoon. 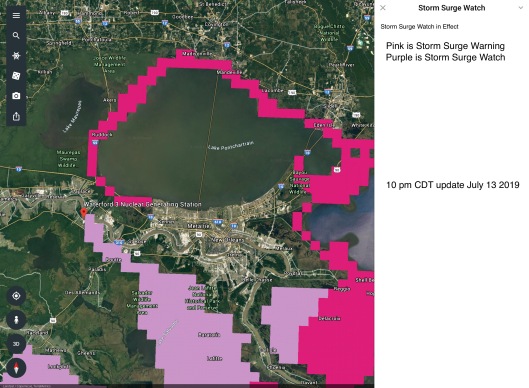 The NWS Storm Prediction Center has issued a

* Effective this Sunday morning and evening from 945 AM until 700
PM CDT.

SUMMARY…A strong wind field on the periphery of Barry will support
the possibility of low-topped supercells capable of a couple of
tornadoes through the afternoon/early evening.

The tornado watch area is approximately along and 50 statute miles
east and west of a line from 85 miles northeast of Natchez MS to 65
miles south southwest of Mc Comb MS. For a complete depiction of the
watch see the associated watch outline update (WOUS64 KWNS WOU7).

REMEMBER…A Tornado Watch means conditions are favorable for
tornadoes and severe thunderstorms in and close to the watch
area. Persons in these areas should be on the lookout for
threatening weather conditions and listen for later statements
and possible warnings.

AVIATION…Tornadoes and a few severe thunderstorms with hail
surface and aloft to 0.5 inches. Extreme turbulence and surface wind
gusts to 60 knots. A few cumulonimbi with maximum tops to 400. Mean
storm motion vector 18045.

…The flood warning is cancelled for the following rivers in
Louisiana…

Forecast crests are based upon rainfall that has occurred along with
anticipated rain for the next 24 hours. Adjustments to the forecasts
will be made if additional heavy rainfall occurs.

Do not drive cars through flooded areas. Remember, two feet of
rushing water can carry away most vehicles including pickups. Turn
around and don`t drown!

A followup product will be issued later. Stay tuned to NOAA Weather
Radio, local tv and radio stations…or your cable provider, for the
latest information. The latest graphical hydrologic information can
also be found at Weather.Gov.

The Flood Warning continues for
The Mississippi River At Reserve.
* Until Monday July 22.
* At 9:00 AM Sunday the stage was 22.6 feet.
* Minor flooding is occurring and Minor flooding is forecast.
* Flood stage is 22.0 feet.
* Forecast…The river will continue to fall to below flood stage by
Monday July 22.
* Impact…At 22.0 feet…Marine and industrial interests along the
river, upstream barge operators, and facilities are impacted.
Navigation will become difficult for smaller river craft. Safety
precautions for river traffic are urged.

* IMPACTS…Minor inundation of low lying areas around bays and
the lower reaches of rivers and bayous. A few mainly secondary
roadways could become covered in water.

A Coastal Flood Advisory indicates that onshore winds and tides
will combine to generate flooding of low areas along the shore.

…FLASH FLOOD WATCH IS IN EFFECT THROUGH THIS EVENING…

.Bands of tropical showers and storms streaming off the gulf into
the circulation of Tropical Storm Barry will produce periods of
torrential rainfall that may result in flash flooding throughout
the day. As the remnants of Barry advances farther northward, the
influence will diminish over portions of the region, but some
narrow bands of heavy rain may linger into Monday. Based on
assessments from today`s expected rains, the flash flood watch may
need to be extended into Monday for portions of the watch area
later today.

…FLASH FLOOD WATCH REMAINS IN EFFECT THROUGH THIS EVENING…

The Flash Flood Watch continues for

* Total rainfall accumulations of 2 to 4 inches with locally
higher amounts possible through this evening.

* Impacts include rapid rises on area small streams and creeks
resulting in flooding on some rivers. Rapid ponding of water
that may overwhelm local drainage capacities due to excessive
rain rates. Areas that don`t normally experience flash
flooding, could.

A Flash Flood Watch means that conditions may develop that lead
to flash flooding. Flash flooding is a very dangerous situation.

You should monitor later forecasts and be prepared to take action
should Flash Flood Warnings be issued.

This Hazardous Weather Outlook is for portions of Southeast
Louisiana…South Mississippi and the adjacent coastal waters.

A Flash Flood Watch remains in effect for the entire outlook area
through this evening, and may be extended in time for portions of
the area into tonight. Bands of tropical showers and storms
at times will be capable of producing torrential rainfall, gusty
winds 35 to 50 mph and occasional lightning. Flash flooding may
result under these bands.

There is a marginal risk of severe thunderstorms today and
tonight. The primary concern will be brief, weak tornadoes within
the bands of rain. Waterspouts in the near shore waters may move
ashore in the coastal areas before dissipating.

A Coastal Flood Advisory is in effect for minor and slowly
improving coastal flooding along the Louisiana coast and tidal
lakes today. Abnormally high tides 1 to less than 3 feet above
normal will be common this morning, but improving after high tide
this afternoon.

A Small Craft Advisory is in effect for the coastal waters and
tidal lakes through 7 am CDT this morning.

.DAYS TWO THROUGH SEVEN…Monday through Saturday

There will still be a threat of heavy rainfall from lingering
rain bands Monday. The outlook area should transition to a more
typical summer pattern of daily scattered afternoon thunderstorms
Tuesday through Saturday.

Depending on short-term rainfall trends, several area rivers and
streams may be in flood. Refer to the latest river flood
statements for more details.