The Turkmenistan-Afghanistan-Pakistan-India (TAPI) Pipeline was to diversify away from dependence on Russia oil infrastructure. But, Putin just announced his willingness to participate in the project. Is this why Trump is suddenly so anxious to withdraw troops from Afghanistan? And, his strange pro-Soviet statement? 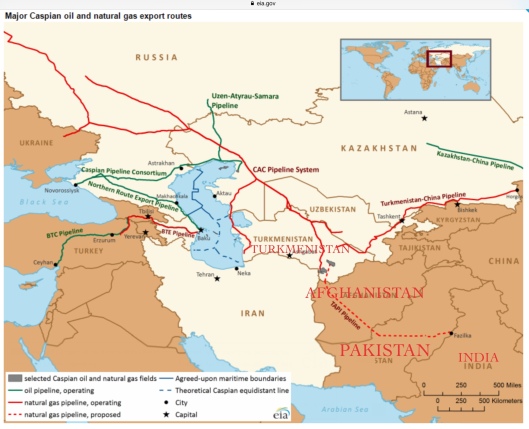 One point of TAPI was to diversify away from Russia: https://en.wikipedia.org/wiki/Turkmenistan–Afghanistan–Pakistan–India_Pipeline

Trump claimed “the reason Russia was in Afghanistan was because terrorists were going into Russia.”

The Washington Post and BBC have deemed the comments “bizarre” and “bad history.” The Soviet Union’s push into Afghanistan has been historically viewed as an attempt to impose communism abroad, not a response to terrorists striking Soviet territory.

“No, there weren’t terrorists coming into the Soviet Union during the Afghanistan war that I recall,” Michael O’Hanlon, a senior fellow in defense foreign policy for the Brookings Institution, told VOA.

Trump also sharply veered from the American stance on the Afghan war, saying Wednesday that the Soviets were “right” to be in Afghanistan. The United States supported the Afghan mujahedeen in this war, believing the Soviets had invaded their southern neighbor.

Kabul, upset over the comments, issued a statement reminding the international community that “the United Nations General Assembly unanimously adopted a resolution condemning the aggression by the former Soviet Union” during the invasion of Afghanistan decades ago.

“Our relations with the world are outlined on the basis of common interest, and the international forces in Afghanistan are present in Afghanistan, not only for Afghanistan, but for the sake of security of the world and friendly countries, too,” the Afghan government said.

Trump also said the Soviet Union’s war with Afghanistan “bankrupted” the country. Experts agree the Soviets’ war in Afghanistan was one of many contributors to the USSR’s demise, but they stress that the major economic factors that hurt the Soviet Union were falling oil prices and the aftermath of Moscow’s economic restructuring.

Ekram Shinwari in Kabul and Akmal Dawi of VOA’s Afghan service contributed to this report. Ayaz Gul contributed to this report from Islamabad.” Excerpted from “Incoming Top US General Meets Afghan President in Kabul” January 03, 2019 5:04 PM, by Carla Babb and Hasib Danish Alikozai https://www.voanews.com/a/incoming-top-us-general-meets-afghan-president-in-kabul/4727813.html
Many believe that Chernobyl brought down the Soviet Union.