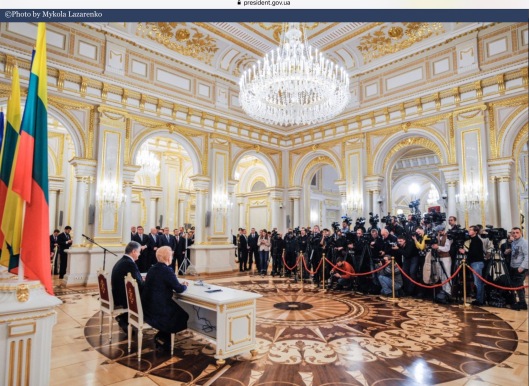 “Presidents of Ukraine and Lithuania: New tough sanctions should be imposed against Russia 7 December 2018 – 14:00

President of Ukraine Petro Poroshenko and President of the Republic of Lithuania Dalia Grybauskaitė emphasize the need to introduce new tough sanctions against Russia as the aggressor country.

“We urge our international partners to take rigorous measures to stop Russia’s aggressive incursions in the Black Sea and the Sea of Azov, and to ensure freedom of navigation in the region. We highly welcome the national sanctions that Lithuania has taken against the participants of the Black Sea aggression and call on other partners to follow a positive example of Lithuania,” the President said during the press conference with the President of the Republic of Lithuania.

In turn, Dalia Grybauskaitė informed that Lithuania had already introduced national sanctions against those who had committed an act of aggression in the Kerch Strait against Ukrainian navy sailors.

“We have introduced our national sanctions against those responsible for the attack on Ukrainian sailors in the Kerch Strait. They will not be able to engage in economic and other activities in our country,” the President of Lithuania said. She also noted that next week, a meeting of the Council of the European Union will be held, during which the issue of sanctions against the Russian Federation will be discussed.

“We must ensure the free navigation of ships in the Kerch Strait. We are very clear about our military and humanitarian support to Ukraine and we openly announce it,” Dalia Grybauskaitė said.” https://www.president.gov.ua/en/news/proti-rosiyi-mayut-buti-zaprovadzheni-novi-zhorstki-sankciyi-51854
https://creativecommons.org/licenses/by/4.0/deed.en

Lithuania impeached their version of Trump promptly, unlike the United States: https://miningawareness.wordpress.com/2017/03/03/lithuanias-2004-impeachment-of-president-due-to-russia-ties-trump-prequel/

Meanwhile Trump admin (Mnuchin) gives waivers on the limited Russia sanctions which have been imposed!
Deripaska connected firms keep getting waivers from sanctions. They are on their 5th waiver: “OFAC Extends Expiration Date of General Licenses Related to EN+, RUSAL, and GAZ December 7, 2018 Washington – The U.S. Department of the Treasury’s Office of Foreign Assets Control (OFAC) today extended further the expiration date of certain general licenses related to EN+ Group plc (EN+), United Company RUSAL PLC (RUSAL), and GAZ Group (GAZ).  These General Licenses 13H, 14D, 15C, and 16D amend their previous versions by extending the expiration date from January 7, 2019, to January 21, 2019, for transactions related to the companies and their subsidiaries.  On April 6, 2018, OFAC designated EN+ and GAZ for being owned or controlled by, directly or indirectly, Oleg Deripaska and other entities he owns or controls.  In that same action, OFAC designated RUSAL for being owned or controlled by, directly or indirectly, EN+.  “EN+, RUSAL, and GAZ are proposing substantial corporate governance changes that could potentially result in significant changes in control of these sanctioned entities.  In recognition that the review of these complex proposals is ongoing, OFAC is extending the expiration date of related general licenses until January 21,” said a Treasury spokesperson“.  http://web.archive.org/web/20181208190814/https://home.treasury.gov/news/press-releases/sm567