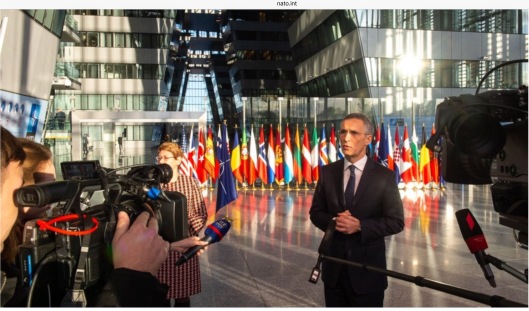 Good evening.
NATO’s Foreign Ministers have just met and discussed transatlantic security, European efforts on defence, burden sharing and also the Intermediate-Range Nuclear Forces Treaty. And I will focus on the INF Treaty.

The Treaty has been a pillar of Euro-Atlantic security for more than thirty years.
It eliminated an entire category of weapons.

And made us all safer.

For over five years the United States has made every effort to engage with Russia. And to seek answers about the new missile.

The US has raised the matter formally with Russia at senior levels more than 30 times.  Other Allies have raised it with Russia too. We did so, a few weeks ago, in the NATO-Russia Council here in Brussels.

But Russia has continued to produce and deploy the missiles. Russia’s violation of the INF Treaty erodes the foundations of effective arms control and undermines Allied security.

This is part of Russia’s broader pattern of behaviour –intended to weaken the overall Euro-Atlantic security architecture.

Arms control agreements are only effective if they are respected by all sides. A situation where the US abides by the treaty and Russia does not, is simply not sustainable.

NATO Allies remain firmly committed to preserving strategic stability and Euro-Atlantic unity. NATO will continue to ensure the credibility and the effectiveness of the Alliance’s overall deterrence and defence posture. We will continue to consult regularly. And we will continue to keep Russia’s military posture and deployments under close review.

At the same time, all Allies are firmly committed to supporting and strengthening real and verifiable arms control.

NATO exists to prevent conflict and preserve peace. And we seek dialogue, not confrontation, with Russia.

We will continue to engage, including through the meetings of the NATO-Russia Council.

So Russia now has a last chance to come back into compliance with the INF Treaty but we must also start to prepare for a world without the Treaty.

And then I’m ready to take your questions.