If Senators Roger Wicker and Cindy Hyde-Smith had helped their fellow Mississippians clean up the tarballs from BP’s oil spill in the Gulf of Mexico, then maybe they would not have voted for BP’s oil spill lawyer to be head the Dept. of Justice’s Environment & Natural Resources Division (ENRD), as they recently did.

“100731-G-0450H-058 – Response workers continue to clean beaches in Mississippi Frank Minter and Eilene Williams, both oil recovery technicians of Rhino Knights, sift sand for tarballs along the beach at Pass Christian, Miss., July 31, 2010. Response workers collect tarballs with their shovels and transfer them into buckets before they sift through to collect only oiled product. Response workers continue to respond to reports of oiled beaches due to the Deewater Horizon oil spill.
100731-G-0450H-037 – Frank Minter sifts tarballs… Responders sift recovered product to ensure they do not remove excess sand from the beach. U.S. Coast Guard photos by Petty Officer 3rd Class Brandyn Hill.”

Mississippi Senators Wicker and Hyde-Smith voted for Trump nominee-BP Oil Spill Lawyer, Jeff Bossert Clark, to head the Department of Justice’s Environment and Natural Resources Division, despite Mississippi being badly hit by the BP oil spill. Louisiana Senators did too, but they aren’t up for re-election. The two Florida Senators abstained.

“ENRD is responsible for litigation in trial and appellate courts on behalf of the United States regarding the prevention and clean-up of pollution, challenges to federal programs and activities, the stewardship of public lands and natural resources, property acquisition to promote national security, wildlife protection, and Indian rights and claims. (US DOJ Press Release)

Perhaps since he’s from the northeastern part of Mississippi, Wicker doesn’t care about the southern part of the state. And, as a cattle farmer, Hyde-Smith would surely want people to buy beef instead of seafood.

As BP’s lawyer, part of Jeff Bossert’s job was apparently to low-ball the amount of oil, which they spilled. 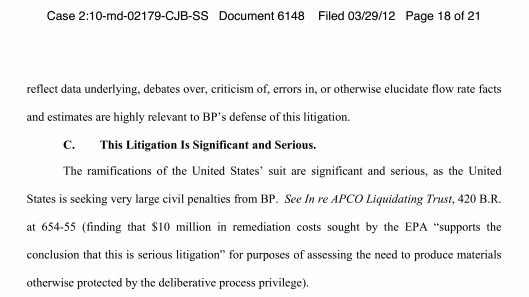 Oil oil everywhere USDOJ
An excerpt from an article on the Exxon Valdez spill in the 1980s:
“How Toxic is Oil“:
“
* Oil, in high enough concentrations, can poison animals by internal and external routes of exposure.
* Birds and mammals often die because oil fouls fur and feathers so that they no longer insulate.
* Smaller organisms can be smothered by a thick layer of oil washing ashore.
* Recent research studies by NOAA scientists have shown that even small amounts of petroleum hydrocarbons can impair the successful development of fish eggs and embryos.

The oil from the Exxon Valdez killed or injured in all of these ways. We also now know that our attempts to clean up an oil spill can indirectly harm some of the resources we are trying to protect.

For example, using hot water or chemicals to remove oil can harm plants and animals, and simply sending a team of cleanup workers into an oiled area can trample sensitive organisms and mix oil more deeply into a beach. The experts who respond to oil spills must consider all of these potential problems when evaluating the trade-offs of how far to go in removing spilled oil…” https://response.restoration.noaa.gov/oil-and-chemical-spills/significant-incidents/exxon-valdez-oil-spill/how-toxic-oil.html

A few articles on impacts:
“Rapid assessment of the impacts of the oil spill on blue crab recruitment in the summer of 2010
Description:
The largest accidental release of crude oil in history occurred in the north-central Gulf of Mexico (GOM) between April 20 and July 15, 2010 (Alford et al., this volume). The DWH spill was unprecedented due to both its magnitude (>600,000 metric tons released) and its occurrence in deeper offshore waters (>1000 m), where the fate of oil is not well understood. Regardless of the debate on the fate of subsurface oil (OSAT 2010), the observed surface slick measured approximately 10,000 km2 at its maximum extent and was highly likely to have had an impact on near surface planktonic larvae, such as C. sapidus, that are typically present in offshore surface waters of the GOM between March and October (Figure 13.1) (Sulkin and VanHeukelem 1986). The C. sapidus fishery in the GOM was valued at more than $45 million in 2009 and is the fourth largest fishery in the GOM in terms of value (National Marine Fisheries Service landings data; st.nmfs.noaa.gov/st1/commercial/index.html). An understanding of oil spill effects on C. sapidus recruitment may have economic implications. More generally, the effects of the DWH spill on C. sapidus larval survival are a potentially important indicator of both impacts of surface oil on invertebrate larvae and effects of the DWH spill on future fishery production.”
See: Fulford, R., R. Griffit, N. Brown-Peterson, H. Perry, AND G. Sanchez-Rubio. “Impacts of the Deepwater Horizon oil spill on blue crab, Callinectes sapidus, larval settlement in Mississippi. Chapter 13, “Impacts of Oil Spill Disasters on Marine Habitats and Fisheries and North America“. CRC Press – Taylor & Francis Group, LLC, Boca Raton, FL, , 253-268, (2014).” https://cfpub.epa.gov/si/si_public_record_report.cfm?Lab=NHEERL&dirEntryId=307170

“Studies found that concentrations of crude oil measured in Gulf spawning habitats could cause cardiac-related deformities in commercially important species including bluefin and yellowfin tuna and mahi mahi“.https://response.restoration.noaa.gov/deepwater-horizon-oil-spill/gulf-research-reveals-oil-damages-fish-heart-development.html

“Assessing the Impacts of the Deepwater Horizon Oil Spill on Tourism in the Gulf of Mexico Region” https://www.boem.gov/ESPIS/5/5451.pdf

“An Analysis of the Impacts of the Deepwater Horizon Oil Spill on the Gulf of Mexico Seafood Industry” https://www.boem.gov/ESPIS/5/5518.pdf

“Jeff Clark is one of the leading environmental litigators in the country, and has been counsel in many of the most significant environmental and natural resource cases of the past two decades, both here at the Department of Justice and in private practice,” said Attorney General Sessions. “Jeff has four years of experience as part of the Environment and Natural Resources Division leadership team, working on virtually every case that the division litigated in the courts of appeals and every environmental case argued before the Supreme Court.  He is ready to lead this Division — and it should not have taken us 16 months to get him confirmed.  And so today I want to congratulate Jeff and to thank my former colleagues in the Senate for confirming his nomination to this important role.”

ENRD is responsible for litigation in trial and appellate courts on behalf of the United States regarding the prevention and clean-up of pollution, challenges to federal programs and activities, the stewardship of public lands and natural resources, property acquisition to promote national security, wildlife protection, and Indian rights and claims.

Prior to his appointment as Assistant Attorney General, Mr. Clark was a partner with the international law firm of Kirkland & Ellis LLP in its Washington, D.C. office.  During his time at the firm, he practiced in diverse areas of law, ranging from environmental to antitrust.  Mr. Clark has argued and won numerous cases in multiple U.S. Courts of Appeals.  He has deep experience in matters involving the Clean Air Act, the National Environmental Policy Act, the Energy Policy and Conservation Act of 1975, and the Energy Independence and Security Act of 2007.

Before joining the firm, Mr. Clark served as a Deputy Assistant Attorney General within ENRD from 2001 to 2005.  In that role, he oversaw ENRD’s Appellate Section and the Indian Resources Section, where he reviewed, edited, and contributed to virtually every brief ENRD filed in the Courts of Appeals, including several cases of exceptional significance that he personally briefed and argued.  During his time in ENRD, Mr. Clark also worked on all environmental or natural resource cases argued in front of the Supreme Court.

Mr. Clark received his bachelor’s degree in Economics and History from Harvard University and earned a master’s degree in Urban Affairs and Public Policy from the University of Delaware.  He obtained his law degree from the Georgetown University Law Center, where he was an editor for the Georgetown Law Journal.
Topic(s):
Environment
Component(s):
Environment and Natural Resources Division
Office of the Attorney General
Press Release Number:
18-1326
Updated October 11, 2018”