US Attorney General Jeff Sessions looks like he has seen a ghost or worse.
“October 26, 2018 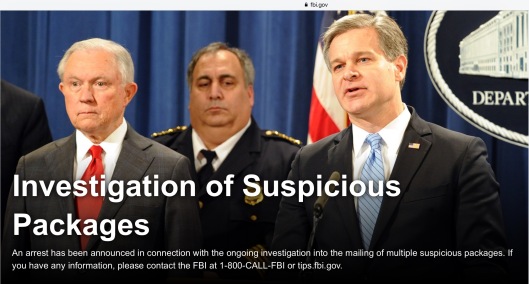 Director Wray was joined by other law enforcement officials, including Attorney General Jeff Sessions (left), as he spoke at a DOJ press conference about the arrest of Cesar Sayoc in connection with the mailing of multiple suspicious packages.

FBI Director Christopher Wray delivered the following remarks during a press conference at the Department of Justice in Washington, D.C.

As the attorney general has confirmed, we have arrested Cesar Sayoc in connection with this investigation. As our investigation is still ongoing, I may not be able to answer questions about his background or about his motive.

What I can say is that this was a nationwide investigation of enormous scope and of the greatest importance. Our investigation ranged from New York to Delaware to Maryland to the District of Columbia to Florida to California. As it always does, the FBI responded to this threat with every resource we’ve got, including our Joint Terrorism Task Forces, our Counterterrorism Division, and our world-renowned experts at the FBI Lab in Quantico.

But—and I really can’t underscore this enough—we didn’t act alone, as you can see from the agencies and departments represented here today. A threat of this scope and of this magnitude requires all of us working shoulder to shoulder. And today’s arrest is a testament to the strength of our partnerships and what we can do when we all work together.

I want to acknowledge the many partners who helped in recovering and transporting these IEDs to our lab in Quantico. This is dangerous and highly specialized work that requires great care, and we’re incredibly grateful to everyone who helped us in getting those to our lab from around the country.

We can confirm that 13 IEDs were sent to various individuals across the country. Each device consisted of roughly six inches of PVC pipe, a small clock, a battery, some wiring, and what is known as “energetic material,” which is essentially potential explosives and material that gives off heat and energy through a reaction to heat, shock, or friction. Though we’re still analyzing the devices in our Laboratory, these are not hoax devices.

I want to focus for a moment on the amazing work of the folks at our FBI Lab. Based on their initial analysis, they uncovered a latent fingerprint from one of the envelopes containing an IED that had been sent to Congresswoman Maxine Waters. We have confirmed this fingerprint is that of Cesar Sayoc. There is also a possible DNA connection between samples collected from pieces of two different IEDs, mailed in separate envelopes, and a sample previously collected from Sayoc in connection with an earlier arrest in Florida.

This is phenomenal work, with the greatest pressure, under an incredibly tight time frame. We see unbelievable work like this on TV shows and in Hollywood, but to see it up close, in reality, is something to behold, and we’re so proud of our team at the Lab for their work in keeping people safe and helping us to find the individual responsible.

Late last night, we also turned to our partners in the Florida Department of Law Enforcement for confirmation of this DNA connection, and we want to thank them in particular for their very quick work. I also want to thank the men and women of the FBI’s Counterterrorism Division, who remain on high alert every single day to keep the American people safe from harm, and who move quickly and efficiently into action every single time.

Today’s arrest does not mean we’re out of the woods. There may be other packages in transit now—other packages on the way. So we need the help of everyone out there—every citizen, every law enforcement partner, everyone we’ve got—to help with this investigation in the days to come.

If you’ve got any information, please call us on our hotline at 1-800-CALL-FBI or online at tips.fbi.gov. No piece of information is too small; every tip could be the one that leads to something very important. And of course, if you see any suspicious activity, please call your local authorities. We need all hands on deck. We need to stay vigilant.

Finally, I want to thank our partners—too many to name across the country—because we cannot do this work alone. Everyone here today understands that, and we take that to heart, every single day, as we do the hard work, together, of protecting 325 million Americans. Now I’d like to turn the podium over to Commissioner O’Neill of the NYPD. https://www.fbi.gov/news/pressrel/press-releases/fbi-director-christopher-wrays-remarks-regarding-arrest-of-cesar-sayoc-in-suspicious-package-investigation