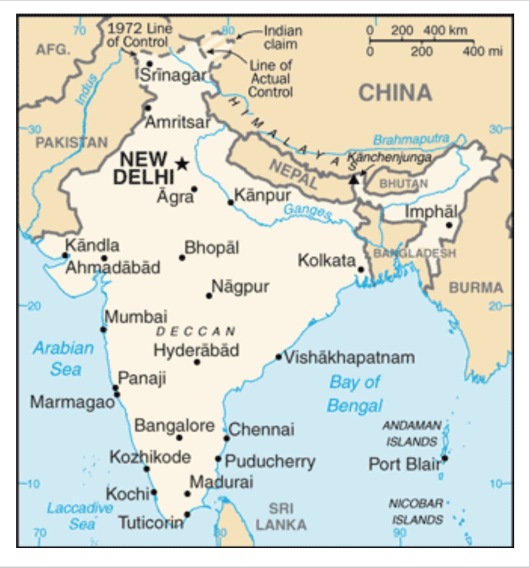 India signing the CSC (Convention on Supplementary Compensation) was pushed for by the US-India Business Council when Asian Indian-American Richard Verma was their lobbyist. It finally was ratified a little over a year after Verma became US Ambassador to India. The CSC is supposed to make the US liable for picking up part of the cost of a nuclear disaster in India. The only beneficiaries of this Convention are those selling defective nuclear equipment (including fuel), which Russian government owned Rosatom and/or its affiliate companies have apparently done in India at Koodankulam. Since Russia is not member of the CSC they would apparently pay nothing for disasters caused by their defective equipment. https://miningawareness.wordpress.com/2016/12/31/nuclear-convention-on-supplementary-compensation-csc-does-not-protect-people-in-india-or-elsewhere/

During the Cold War India was allied with the Kremlin, which is why the US ended up allied with Pakistan. Putin was a KGB agent in his late 30s when the Soviet Union fell. Why would anyone imagine that something changed?

From VOA:
“India Seals Deal for Russian Air Defense Systems During Putin Visit
October 05, 2018 11:20 AM by Anjana Pasricha
NEW DELHI —
India has signed a deal worth more than $5 billion to buy five sophisticated air defense missile systems from Russia that could trigger sanctions by the United States.

The agreement for the purchase of the S-400 surface-to-air missile systems was sealed Friday in New Delhi as Russian President Vladimir Putin visited India and held a summit with Prime Minister Narendra Modi.

Although the deal was not mentioned when the two leaders appeared before reporters, a joint statement after the talks said that the two sides welcomed the agreement.

The deal, said analysts, demonstrates that India is seeking a balance as it steadily grows strategic ties with Washington, but is unwilling to forgo its long-standing defense partnership with Russia.

Washington has warned that the purchase of the air defense system would be a “significant transaction” violating a U.S. law passed last year under which countries trading with Russia’s defense and intelligence sectors face the threat of sanctions.

New Delhi, which does not want to jeopardize its growing ties with Washington, is optimistic about avoiding U.S. sanctions.

In talks with U.S. officials, India has stressed its need for the air defense system to strengthen its capabilities against the might of China, whose ambitions are moving New Delhi and Washington closer.

“If the U.S. thinks India is an important partner in the Indo Pacific, they will find a way out,” said political analyst Manoj Joshi at the Observer Research Foundation in New Delhi, pointing out that India is not bound to follow U.S. law.

In a statement, a spokeswoman for the U.S. embassy in New Delhi, Jinnie Lee, said that the law is “not intended to impose damage to the military capabilities of our allies or partners.” She did not comment on the deal, but said that any waivers would be considered on a transaction by transaction basis.

U.S. officials have said there is no guarantee of a waiver from the Trump administration, which has imposed sanctions on China’s military for the purchase of the same system. The deal figured in discussions in New Delhi when U.S. Secretary of State Mike Pompeo visited India last month.

Indian Air Force Chief B.S. Dhanoa has said that the S-400 system would be a “booster shot” for the Indian air force. The S-400 is Russia’s most advanced long-range, surface-to-air missile system and can take down enemy aircraft from the ground.

India is the world’s largest purchaser of arms and Russia its biggest supplier. In recent years, the U.S. has also become a significant source, with purchases adding up to $15 billion over the past decade.

Political analyst Joshi said the deal would help restore ties between India and Moscow on an even keel — relations between the Cold War allies had cooled somewhat in recent years as New Delhi’s ties with Washington blossomed. The contract for the air defense system is one of the largest handed out by India.

After the summit, Modi spoke of a “trusted” and “special and privileged partnership” with Moscow as he addressed reporters along with Putin.

“Russia has stood by India through time and has played a crucial role in India’s growth story,” he said.

Putin said that Russia places a top priority on its India relationship and the two countries had concurrent positions on key global issues.

Eight agreements signed by the two countries include pacts for Moscow to build six nuclear power plants in India and cooperate with the Indian space agency in sending a manned mission to space. ” https://www.voanews.com/a/india-seals-deal-for-russian-air-defense-systems-during-putin-visit-/4601225.html