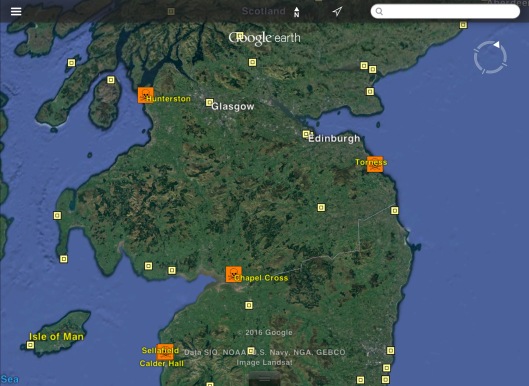 While graphite cracking appeared much earlier, the keyway cracks were predicted in 2009 to appear by 2015. But, they were first found at Hunterston B, reactor 4, in 2014. 2009 was the year that the British nuclear power stations were sold to the French government (EDF). (See: https://en.wikipedia.org/wiki/British_Energy )

French government owned EDF needs to permanently shut down all of its old nuclear reactors in the UK, as well as France. Many, or all, of the UK reactors have cracked graphite bricks which, if they break through, can keep the nuclear reactors from being shut down, leading to meltdown.

The graphite could burn for days, emitting dangerous radioactive materials and further contaminating Europe, like Chernobyl. Cracks in graphite bricks at Hunterston B, Hinkley Point, Heysham 1, and Hartlepool could cause misalignment of the holes, thus significantly increasing the risk of an accident: “fuel rods could become jammed in the reactor, and misalignment could make it hard, if not impossible, to lower in control rods to close the power plant down.” See: “Why cracks at the cores of ageing AGRs worried safety inspector” https://www.theguardian.com/science/2006/jul/05/energy.greenpolitics

“Nuclear reactor cracks ‘challenge safety case’, 31 October 2016 , Fears have been raised that two of the UK’s nuclear reactors might not be able to shut down in an emergency….” http://www.bbc.com/news/uk-england-somerset-37789654

In March 2018, ONR was informed that additional keyway root cracks had been found during recent planned inspections of the graphite bricks that make up the core at Reactor 3 at Hunterston B.

Donald Urquhart, Deputy Chief Nuclear Inspector and Director of ONR’s Operating Facilities Division said: “We welcome the decision by EDF to delay the return to service of Reactor 3 at Hunterston B pending further assessment of the significance of the most recently identified keyway root cracks. I view EDF’s decision as responsible, conservative, and made in the best interest of public safety.”

EDF will require ONR’s permission to restart Reactor 3, and we will be assessing the adequacy of EDF’s safety case for the longer term operation of the reactor.

According to the BBC, 16 Feb, 2016, “EDF to keep four UK nuclear plants open for years longer” By John Moylan, “Heysham 1 and Hartlepool will have their life extended by five years until 2024, while Heysham 2 and Torness will see their closure dates pushed back by seven years to 2030.” http://www.bbc.com/news/business-35583740. Hunterston B, near Glasgow, was already twice extended: “Hunterston B nuclear power plant will run until 2023“, 4 December 2012  http://www.bbc.com/news/uk-scotland-glasgow-west-20590915

“Hunterston B was originally planned to operate until 2011”
https://en.wikipedia.org/wiki/Hunterston_B_nuclear_power_station

First appearance of keyway cracks at Hunterston reported in 2014: http://www.onr.org.uk/pars/2014/hunterston-b-14-011.pdf
“3.7 Graphite Core 55 During the statutory outage, NGL has undertaken inspections, measurements and taken samples of the reactor graphite core, as required by the graphite core safety cases. An ONR specialist graphite inspector visited Hunterston B to inspect how the licensee was performing the various periodic shutdown related activities necessary to ensure the integrity of the graphite core. The findings of his inspection are given in his intervention record 26 and there are further developed in his assessment report27. 56 The specialist inspector reports the licensee has discovered two new full height single axial cracks in graphite moderator bricks. These were in channel layer 5 and channel layer 4, both channels that have been inspected in the past. Discovery of cracks is expected, a proportion of the bricks have them. It is believed that most, if not all other cracks that have been discovered at Hunterston B and the other AGRs, have originated at the brick bore. These are a consequence of early life ageing behaviour, when the contraction of the graphite is such that the bore is in tension. Most cracks are smaller than full height , some run circumferentially. Both of these categories are of lesser concern than ones that extend the full axial height. These cracks sometimes occur singly, but occasionally as double cracks normally 180° apart. The cracks in channels and were sentenced as keyway root cracks however. 57 The origin of keyway root cracks is different. Their occurrence has only been postulated until their detection during this outage. These cracks ar e characteristic of later life behaviour, when the stresses have reversed and the graphite at the outer surface of the moderator fuel bricks, rather than the inner surface, is in tension. Cracks have been predicted to start at the keyways and propagate to the inner surface and it seems likely that this is what has happened in channels and . A full height bore crack and a keyway root crack are believed to have the same structural significance, the importance of the latter type is that there may eventually be many more of them. 58 The specialist inspector states that the discovery of keyway root cracks is therefore of significance, as they are the first examples in all of the AGRs of a ne w phenomenon, that has always been predicted by t he licensee to be potentially life limiting. Although this type of cracking was not predicted to have occurred yet, it is not wholly surprising. The licensee has, in his view, presented a good argument that the new cracks have occurred because the bricks are part of a small anomalous population of high shrinkage bricks. The licensee believes that these have not been manufactured in quite the same way as the others and that the high shrinkage bricks are predominantly confined to Hunterston B Reactor 4. The licensee further argues that there are sufficiently few of these bricks, that even if all of them develop cracks, there will not be enough cracks in total for the present safety case limit of 10% to be crossed. The licensee argues that the behaviour of the known crack and any other as-yet undetected similar cracks will not produce an effect on the core that presents any significant risk that the core’s saf ety functions could be compromised. 59 Following d iscovery of the first keyway root crack in channel the licensee extended the outage to perform additional inspections of two additional channels, which also had apparently high shrinkage bricks in them. Thus, unusually they have inspected during the outage. It was in one of these channels that the second keyway root crack was found in channel The other additional channel appears to be un-cracked. The information gathered in these extra inspections will assist in further analysis and the specialist inspector therefore considered it was a responsible action for them to extend the outage to gather this data. 60 The specialist inspector states it is not yet known whether the occurrence of these cracks presages an earlier onset of keyway root cracking in the remaining bricks. The licensee’s safety case includes regular inspections of the core and they had an existing safety case that accounted for the possibility of discovery of such cracks earlier than predicted. The specialist inspector states he does not therefore consider that the discovery has placed them outside the bounds of their existing safety case. He does not consider that this occurrence presents any reason to object to the re turn to service. In the longer term, the detection of the crack and the measurements performed on these particular bricks may allow further analysis that could facilitate be tter prediction methods. He judges that it will be necessary for the licensee to consider these aspects in the coming months, together with the implications for future inspections…..“http://www.onr.org.uk/pars/2014/hunterston-b-14-011.pdf