“The United Nations, European Union and human rights groups charge that firing at unarmed demonstrators is an excessive use of force, but Israel has rejected their demands for an inquiry.” (VOA News, April 7, 2018)

UN on Gaza: “Palestinians in Gaza are ‘locked in’, denied free access to the remainder of the occupied Palestinian territory and the outside world. Movement restrictions imposed by Israel since the early 1990’s and intensified in June 2007, following the takeover of Gaza by Hamas, have severely undermined the living conditions. The isolation of Gaza has been exacerbated by restrictions imposed by the Egyptian authorities on its single passengers crossing (Rafah), as well as by the internal Palestinian divide. The UN Secretary-General that the blockade and related restrictions contravene international humanitarian law as they target and impose hardship on the civilian population, effectively penalizing them for acts they have not committed. Major escalations of hostilities in the past years have resulted in extensive destruction and internal displacement.” https://www.ochaopt.org/location/gaza-strip

Jesus was Jewish and some Palestinians are Christians. Islam considers Jesus a great prophet. 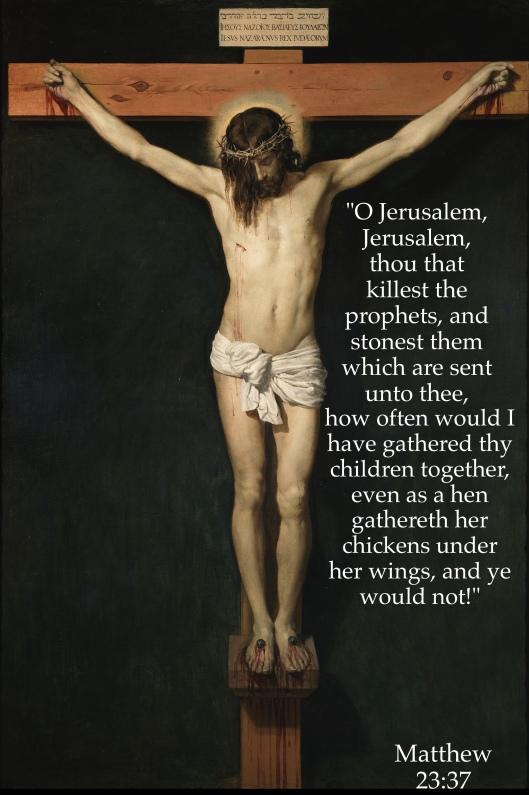 Deutsche Welle reported: “Israel denies Easter travel permits to Gaza Christians Date 30.03.2018 On Good Friday, hundreds of pilgrims retraced the last journey of Jesus in the Old City of Jerusalem. Many Christians in Gaza, however, are still waiting for permits to take part in the Easter festivities….” Read the article here: http://www.dw.com/en/israel-denies-easter-travel-permits-to-gaza-christians/a-43198714 (The majority of Gaza Christians are Greek Orthodox and celebrate Easter this Sunday, April 8th, and Good Friday was April 6th.)

Many American Christians appear not to know that there are Palestinian Christians and fail to give them needed support. Palestinian Christians “number 6–7% of the 12 million Palestinians…. In 2009, there were an estimated 50,000 Christians in the Palestinian territories, mostly in the West Bank, with about 3,000 in the Gaza Strip” https://en.wikipedia.org/wiki/Palestinian_Christians Jesus was Jewish and many, or most, early Christians were Jewish, but Islam holds him in high esteem as a great prophet, whereas much of Judaism apparently still does not, because they associate him with anti-semitism and pograms. When people do evil in the name of religion, it reflects badly upon the religion. Islam and Judaism consider that belief in Jesus as son of God, the Trinity, undermines monotheism. Christians converted to Islam-Islam spread mostly where Christians already believed that Jesus was the adopted son of God, as opposed to the literal son of God. It was anti-semitism and pograms, especially in the Russian Empire, which led to the creation of the State of Israel, where other people had been living a very very long time.

“Posted on 6 April 2018
For the second Friday in succession, multiple Palestinian casualties during demonstrations at the perimeter fence in the Gaza Strip
Flash update
As of 20:00 today, 6 April, seven Palestinians have been killed and over 1,350 injured by Israeli forces in the Gaza Strip, according to the Ministry of Health (MoH) in Gaza. The MoH reports that approximately 400 of the injuries were caused by live ammunition, of whom 25 are in critical condition. The Palestine Red Crescent Society (PRCS) reported that their teams handled 700 of the injured, including over 320 of the live ammunition injuries.

The casualties occurred in the context of ongoing mass demonstrations by Palestinians on the Gaza side of the perimeter fence with Israel, where the Israeli army imposes a ‘No Go Zone’, citing security concerns. Today’s event was the second in the ‘March of Return’, a series of mass protests on successive Fridays, leading up to the 70th anniversary of what Palestinians refer to as the 1948 ‘Nakba’, on 15 May. Last Friday’s demonstrations resulted in the highest number of casualties in a single day in Gaza since the 2014 hostilities, with 19 Palestinians killed by Israeli forces (or died of wounds sustained that day), and over 1,400 injured, including over half of them by live ammunition, according to the MoH. The Israeli authorities have stated that many of the fatalities were members of Hamas or militant groups, and accused the MoH of inflating the number of wounded by live ammunition.

Today’s demonstrations were largely non-violent, in line with the call of the organizers, who have established tent camps in all five Gaza governorates, some 700 metres from the fence. As occurred last Friday, some Palestinians approached and attempted to breach the fence, burnt tires, threw rocks and, according to Israeli sources, fire bombs at Israeli forces, who have significantly increased its presence in the area, deploying tanks and snipers.

Operation theaters in MoH hospitals were overwhelmed by the number of injuries, with urgent needs reported for anesthesia and other essentials. The Gaza MoH also reported that medical supplies needed for emergency and trauma management continue to deplete, and replacements from the MoH in Ramallah are yet to arrive. There is a particularly severe shortage in external fixation sets. In a visit to Shifa Hospital, the largest in Gaza, where a state of emergency had been declared, OCHA witnessed 115 injured in the operation rooms, departments of intensive care, orthopedics and trauma departments.

The PRCS also warned of a shortage of medical supplies and of personal protective equipment for their 400-person team deployed across Gaza. The PRCS established another three Advanced Medical Posts near the areas where the protests were taking place, bringing the total number of such posts to five to cover all areas along the fence. In the afternoon hours, the posts in Jabalia and Gaza City were unable to cope with the number of injuries and transferred the injured to hospitals without proper first aid assistance.

The Health Cluster is monitoring the situation and providing support, in coordination with partners.

Medical supplies prepositioned by WHO, UNICEF, ICRC, and MAP including surgical, dressing, drug kits are being either used or will be used in the coming days. The Israeli-controlled Gaza crossings are closed until Sunday, 8 April, due to the Passover holiday, except for urgent humanitarian cases.

“Gaza’s health sector is struggling to deal with the mass influx of casualties between last week and today,” said the Humanitarian Coordinator, Mr. Jamie McGoldrick.

“Years of blockade, internal divide and a chronic energy crisis, have left essential services in Gaza barely able to function. Health actors now estimate that US$ 2 million is urgently needed in the short-term for medicine, medical disposables, laboratory materials and other supplies for emergency care, while US$ 20 million is required in 2018 to meet the urgent health needs.”

Following last Friday’s casualties, in a statement attributable to his spokesperson, the UN Secretary-General expressed his deep concern about the clashes and casualties, and called for an independent and transparent investigation into the incident, to which Israel has objected, although the Israeli army has announced that it will hold its own internal investigation. The spokesperson for the UN High Commissioner for Human Rights stated that “In policing the green-line fence, Israeli security forces are required by international human rights law to respect the rights to peaceful assembly and expression and to use, to the extent possible, non-violent means to discharge their duties. In accordance with international human rights law, firearms may be used only in cases of extreme necessity, as a last resort, and in response to an imminent threat of death or risk of serious injury.”
Disclaimer: Data and analysis provided in this Flash Update is based on preliminary information available. Further assessments are pending. https://www.ochaopt.org/content/second-friday-succession-multiple-palestinian-casualties-during-demonstrations-perimeter

From VOA:
“Palestinians Bury Protesters Killed by Israeli Fire, Including Well-Known Journalist
Last Updated: April 07, 2018 12:37 PM VOA News
Palestinians in the Gaza Strip attended funerals Saturday for a well-known Palestinian journalist and others who were killed in the latest wave of border clashes.

Nine Palestinians died Friday after being shot by Israeli troops during border clashes, the health ministry in the Hamas-run Gaza strip said Saturday.

Yasser Murtaja, a photographer with the Gaza-based Ain Media agency, was hit during Friday’s clashes, the ministry said, despite wearing a press vest.

The Israeli military said shots were fired only at “instigators” who were involved in attacks on the troops and was investigating Murtaja’s death.

“The IDF (Israeli Defense Forces) does not intentionally target journalists,” the IDF said Saturday. “The circumstances in which journalists were allegedly hit by IDF fire are not familiar to the IDF and are being looked into.”

In addition to the nine dead, one of them a 16-year-old boy, at least 491 other people were wounded by Israeli gunfire, the health ministry said.

Israeli soldiers on Friday fired tear gas, rubber bullets and live ammunition to prevent a breach of the border fence. The protesters burned tires near the fence, causing thick black smoke to rise into the air.

Palestinian protesters have set up tent encampments a few hundred meters from the fence that separates Israel from the Gaza Strip. Groups of youths have gone closer to fence to throw stones or to burn tires, risking live fire from Israeli troops.

Israeli Defense Minister Avigdor Lieberman described the protests as a provocation and warned that anyone approaching the border fence is putting his life at risk.

Israel’s military estimated the number of protesters on Friday to be around 20,000. That is more than in recent days, but less than the 30,000 who protested on the first day of the demonstrations on March 30. That day, 17 Palestinians were killed by Israeli forces.

The United Nations, European Union and human rights groups charge that firing at unarmed demonstrators is an excessive use of force, but Israel has rejected their demands for an inquiry.

The Islamic militant group Hamas, which rules Gaza, says the protests are aimed at highlighting Israel’s crippling blockade on the coastal territory as well as the so-called “right of return:” the right of Palestinian refugees to return to their former homes in Israel.

The demonstrations, set to end on May 15, are designed to commemorate what Palestinians refer to as the Nakba, or “catastrophe,” when hundreds of thousands of Palestinians had to flee their land or were expelled during the war in 1948 that led to the creation of Israel.

The demonstration is expected to end at the same time Washington plans to open an embassy in Jerusalem, a move that has infuriated Palestinians, who have claimed the eastern section of the city as the capital of their future state.
Robert Berger contributed to this report from Jerusalem“.https://www.voanews.com/a/gaza-burries-journalist-killed-after-covering-mass-protests/4336698.html