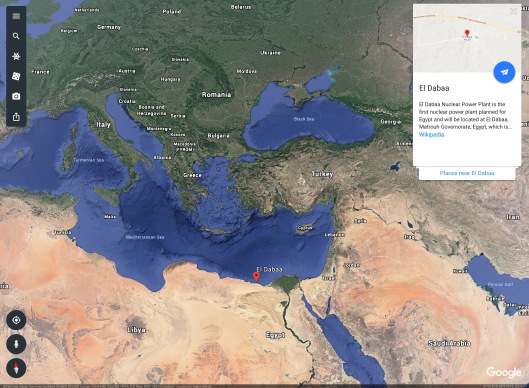 Rosatom’s Director of Public Policy on Radioactive Waste, Spent Nuclear Fuel and Nuclear Decommissioning, Oleg Kryukov, said: “At the request of the company’s Federal Centre for Nuclear and Radiation Safety, the fuel storage will be equipped with double transport-packing containers.”

Experts recently said that Rosatom must have dual-purpose containers for transportation and storage of the spent nuclear fuel of its overseas nuclear power plants’ construction projects. For Egypt, they have stressed, there is a need to build large warehouses for the storage of Egypt’s spent nuclear fuel, which will be reprocessed in Russia.

On 19 November 2015, Egypt and Russia signed a deal to build and operate the first nuclear plant in Egypt’s west-northern coastal city of Dabaa.

The Dabaa nuclear plant was planned to consist of four reactors of 1,200 megawatts each. Under the agreement, Russia had provided Egypt with a $25 billion loan to finance the construction of the seven-year project, which will be paid off over 35 years. This work by Middle East Monitor is licensed under a Creative Commons Attribution-NonCommercial-ShareAlike 4.0 International License “. https://creativecommons.org/licenses/by-nc-sa/4.0. https://www.middleeastmonitor.com/20171205-russia-to-build-nuclear-fuel-depot-in-egypt/

Will Egypt use its over $1 billion per year in US hand-outs to pay this off? “The U.S. gives Egypt $1.8 billion annually, mostly in the form of military aid“. https://www.voanews.com/a/russia-and-egypt-finalizing-military-cooperation-agreement/4145739.html

“Since 1946, American taxpayers have provided more than $79 billion in economic and military aid for Egypt, and that does not include excess defense equipment valued at billions of dollars.” https://www.leahy.senate.gov/press/statement-of-senator-patrick-leahy-subcommittee-on-the-department-of-state-and-foreign-operations-hearing-on-us-assistance-for-egypt

The director general of Russia’s atomic energy agency Rosatom, Sergei Kirienko, said the agreement is for the construction and operation of four 1,200 MW reactors.

During a press conference broadcasted by Egyptian state TV, Al-Sisi said the project will be implemented with a 35-year loan to Egypt from Russia.

The plant is to be built in Dabaa on the Mediterranean coast in the northwest of the country.

“The country and the balance sheet will not bear the cost of building this plant. It will be paid back through the actual production of electricity that will be generated by this plant,” explained the Egyptian premier.

Egypt announced the project earlier in February during a visit by Russian President Vladimir Putin, when a memorandum of understanding was signed….” This work by Middle East Monitor is licensed under a Creative Commons Attribution-NonCommercial-ShareAlike 4.0 International License. https://creativecommons.org/licenses/by-nc-sa/4.0 https://www.middleeastmonitor.com/20151120-egypt-and-russia-seal-deal-to-build-first-nuclear-power-plant/