Washington (November 30, 2017) – Senator Edward J. Markey, a member of the Senate Foreign Relations Committee, sent a letter today to Secretary of State Rex Tillerson and Secretary of Energy Rick Perry requesting a full and immediate briefing on the status of all current and ongoing discussions between the United States and other countries on concluding peaceful nuclear cooperation agreements, also known as “123 agreements.”

Revelations of the Trump Administration’s ongoing discussions on possible 123 agreements with Saudi Arabia and Jordan and the lack of transparency surrounding them are especially troubling in light of a recent report that President Trump’s former National Security Advisor Michael Flynn was peddling a plan to build nuclear reactors throughout the Middle East, in part, to influence the balance of power in the region,” said Senator Markey.

The President is required by law to keep the Senate Foreign Relations Committee ‘fully and currently informed of any initiative or negotiations relating to a new or amended agreement for peaceful nuclear cooperation’ and Congress must review and can block any proposed nuclear cooperation agreement.

Now more than ever it is imperative that Congress be fully informed about and carefully review any proposed 123 agreements between the United States and other countries.”

The full text of the letter can be found HERE.
https://www.markey.senate.gov/download/letter-on-123-agreement-negotiations 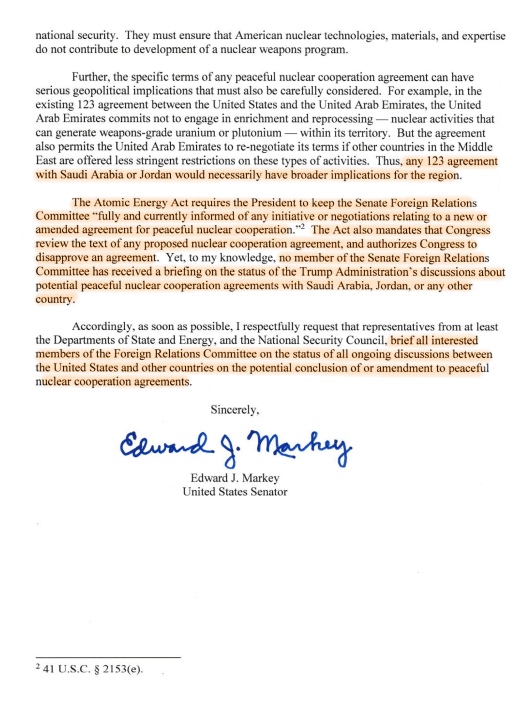