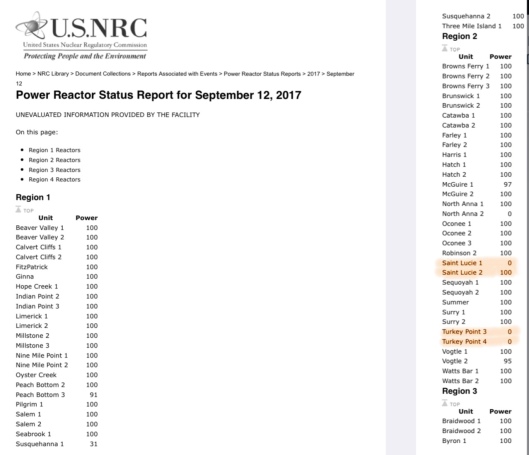 In the blog they state that the second Turkey Pt. Nuclear reactor shut down automatically, whereas in the reactor events notice they state that it was manually shutdown: “MANUAL REACTOR TRIP ON LOWERING STEAM GENERATOR WATER LEVEL: On 09/10/17 at 1855 [EDT], [Turkey Point] Unit 4 reactor was manually tripped from 88% RTP [Rated Thermal Power] due to a failure of 4C Steam Generator main feed regulating valve causing lowering S/G [Steam Generator] level…. The licensee is investigating the failure of the feed regulating valve. Offsite power is available. Decay heat is being removed via main feedwater with steam discharged to atmosphere using the ADVs [Atmospheric Dump Valves]. There is no known primary-secondary steam generator tube leakage“. 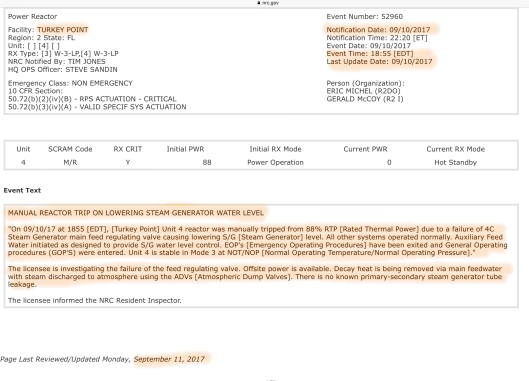 NukePro points out: “Plant was running at 88% prior to ‘manual scram’, which I believe to be an automatic SCRAM but they wanted to pretend they were in control” http://www.nukepro.net/2017/09/turkey-point-nuclear-in-florida-dumping.html

“On May 31, 2017, Curtiss-Wright, Nuclear Division, Huntsville Operations issued a letter documenting final findings regarding a potential defect concerning model GB-1 GRAYBOOT kits supplied with two-tined, silver-plated, 12-14 AWG contacts.” This was applicable to both Turkey Point Nuclear Power Station and St. Lucie, as well as a lengthy list of other nuclear power stations: https://www.nrc.gov/reading-rm/doc-collections/event-status/event/2017/20170612en.html https://www.nrc.gov/docs/ML1716/ML17165A406.pdf Is this what caused the shutdowns? Or water leakage? https://www.nrc.gov/docs/ML1104/ML110450487.pdf Or both? Or some other defective parts? https://miningawareness.wordpress.com/2016/07/03/more-safety-related-defects-potentially-impact-at-least-6-us-nuclear-power-stations/
https://miningawareness.wordpress.com/2016/05/13/defective-us-nuclear-breakers-by-schneider-electric-of-france-schneider-appears-involved-in-french-nuclear-parts-scandal-as-original-owner-of-le-creusot-forge-too/ Interesting that Curtiss-Wright sent in a notice to the US NRC that these potentially defective parts are really ok so close to the Turkey Point and St. Lucie problems, both of which figure on their list:
https://www.nrc.gov/reading-rm/doc-collections/event-status/event/2017/20170912en.html

In 1998, “NRC: Information Notice No. 98-21:Potential Deficiency of Electrical Cable/Connection Systems” it is stated that “…in NUREG/CR-5461, “Aging of Cables, Connections, and Electrical Penetration Assemblies Used in Nuclear Power Plants”…. SNL reported that electrical cable connections are highly reliable devices under normal plant operating conditions, and they exhibited no evidence of significant increases in failure rate under normal operating conditions with aging. However, NUREG/CR-5461 also reports that many of the causes of failures of electrical cable connections in accident conditions would not be detected during normal operations because of the absence of high temperatures and humidities, and that the expected most important failure mode is shorting or reduced electrical isolation. These conclusions are consistent with the recorded test data results obtained during the electrical cable connection testing in that there was no significant degradation in the measured insulation resistances of the test specimens during the aging and accident irradiation exposures…” https://www.nrc.gov/reading-rm/doc-collections/gen-comm/info-notices/1998/in98021.html While Grayboot passed testing in 1998, that was 20 years ago, and some other brands did not.

According to a Newsweek article published Monday night, Turkey Point Nuclear Power Station “failed to improve seals on its exterior doors, which would produce ‘substantial leakage’ in a hurricane, as well as improve floodwater drainage mechanisms near ‘key’ cooling pumps, according to a flood- and hurricane-preparedness report the power plant sent to the Nuclear Regulatory Commission in June….” “FLORIDA NUKE PLANT DID NOT MEET FED SAFETY GUIDELINES AS IRMA ROARED” BY MELINA DELKIC ON 9/11/17 AT 10:01 PM. While unable to find the June 2017 report discussed in the article yet, the post-Fukushima flooding walkdown expressed similar concerns. The article, which has additional important and relevant information, may be found online. The Union for Concerned Scientists has raised even more concerns: http://allthingsnuclear.org/elyman/floridas-nuclear-plants-and-hurricane-irma

Notice that they put both the Hurricane Warning and the subsequent shutdown for St. Lucie together. They don’t mention the problem of salt in reactor events below, even though it was mentioned in the blog post. See too: https://miningawareness.wordpress.com/2017/09/12/hurricane-irma-nuclear-power-mysteries-fpl-didnt-shutdown-second-turkey-pt-nuclear-reactor-it-shut-itself-down-st-lucie-nuclear-power-station-unit-has-salt-buildup-on-insulators-in-the-switc/ 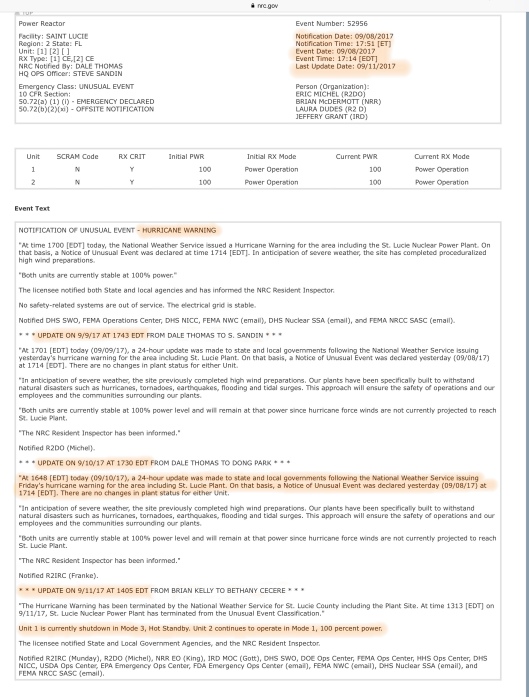 https://www.nrc.gov/reading-rm/doc-collections/event-status/event/2017/20170911en.html
Notice that for Turkey Point the hurricane warning and valve problem are listed separately, making it easy to overlook the valve problem. In the warning it notes that the grid is at high risk and yet they recklessly left one of the nuclear reactors on for Hurricane Irma, only to have it shutdown anyway. 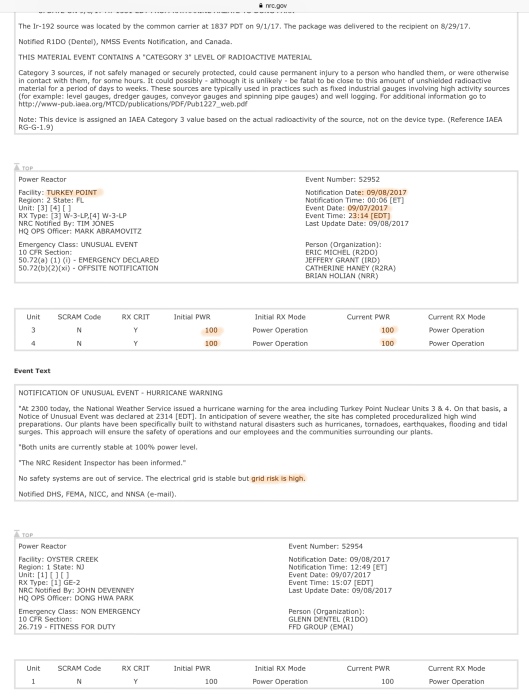 At least for the Crystal River spent nuclear fuel pools it is realized that the spent fuel is still hot and does still need cooling, despite the US NRC sometimes sounding like it does not, and so “All equipment including Emergency Diesel Generators (EDGS) is available to perform required spent fuel cooling“. Apparently Duke understands that the spent nuclear fuel still needs cooling, even if the US NRC does not.