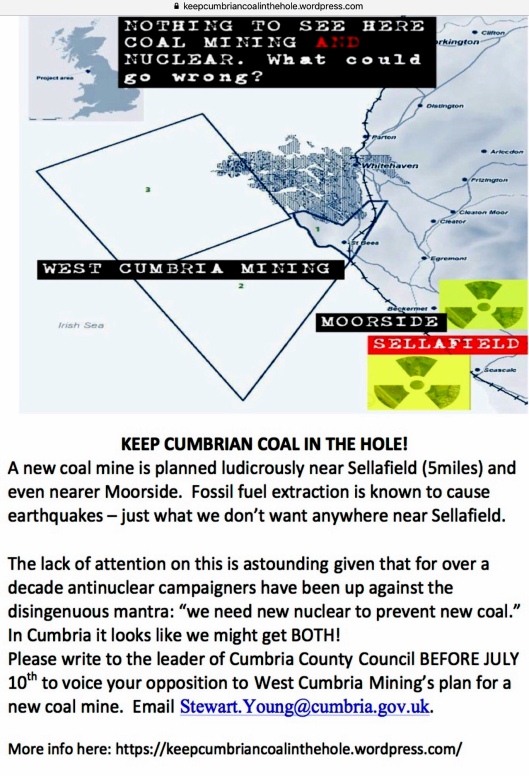 Write to Cumbria County Council to oppose by mail, email or online by the 10th July 2017 http://councilportal.cumbria.gov.uk/mgUserInfo.aspx?UID=217

The UK’s Sellafield Nuclear Site is 5 miles away from the proposed West Cumbrian coal mining project. The proposed Moorside Nuclear Power Station is even closer. Sellafield is the most dangerous nuclear site in Europe and almost certainly has the most dense concentration of separated plutonium in the world. While Russia has more separated plutonium than the UK, Russian plutonium is unlikely so densely concentrated in one location.

China is closing its offshore coal mine. Why is the UK thinking of opening one and mostly for export?

In 2008, Reuters reported the serious impacts of a relatively small earthquake caused by coal mining: “Earthquake shakes up German coal mining“, Tue Mar 4, 2008 that “German pensioner Erika Ihiebert has lived with minor earth tremors caused by coal mining for years. But when her chimney collapsed nearly two weeks ago, she had had enough …. the southwestern state of Saarland [was] hit by a tremor measuring 4.0 on the Richter scale last month. It caused meter-long cracks in buildings in the town of Saarwellingen, cut power and pushed heavy blocks off a church steeple…” http://uk.reuters.com/article/lifestyle-germany-coal-dc-idUKL0415299220080305

“The North West of England has been the only area in the UK ever to have suffered a liquefaction event following a rather minor earthquake near Barrow (now home to Trident) in 1865 following vast mining operations at nearby Hodbarrow. The magnitude was small “probably in the range 2.5–3.5 ML”. (pure and applied geophysics November 1998, Volume 152, Issue 4, pp 733–745). A liquefaction event at Sellafield or Springfields would be catastrophic and not only for the North West!” as explained by Marianne Birkby:
https://mariannewildart.wordpress.com/2017/06/29/petition-to-stop-fossil-fuel-extraction-near-nuclear-installations/

The Haig Pit Mining And Colliery Museum. should be re-opened, rather than reopening a new coal mine near Sellafield Nuclear Site. Read about historic disasters here: https://haigpit.wordpress.com/disasters/

What if a fire can’t be put out? https://miningawareness.wordpress.com/2013/11/20/coal-seam-mine-fires-environment/ https://en.wikipedia.org/wiki/Firedamp

Sample Letter from Keep Cumbrian Coal in the Hole:
“Letter to Send to Cumbria County Council
The following is a letter to send to Cumbria County Council.  It is always best if you can write in your own words and use the letter as a template… The main thing is to point out that there is an overabundance of coking coal and that coal mining can cause earthquakes which is the last thing that we want anywhere near the hazardous Sellafield site.

I am writing to strongly oppose the plan to open a new coking (metallurgical) coal mine off St Bees in West Cumbria.

“The coalfields extend from onshore to offshore, over 400m below ground and the sea, along the coast of Whitehaven, West Cumbria in NW England and covering an area of 200km2.  Inclined tunnels called ‘drifts’ will be constructed to provide access from the modern, architect-designed site buildings down to the coalfields…..the exact positions of the site buildings and drifts are not yet finalised but are anticipated to be south of Whitehaven and north of St Bees.”

I strongly oppose this plan for the following reasons:

KEEP FOSSIL FUEL IN THE GROUND
* West Cumbria Mining are manipulating the public and local politicians by saying that there is a need for a source of carbon in making steel wind turbines and coke is the best source.

* What they are not telling the public is that there is an “overcapacity” of coking coal on the global market with protests in China as miners are laid off as the mines close. The prices for coking coal are Volatile and more often than not reported as falling. Steel can be recycled, it can also be used for Trident submarines as well as wind turbines

* WCM say that coking coal mined here in Cumbria will prevent imports, but this is meaningless as the plan is to export 80% of the coal.

* If we want to prevent climate change there is already too much fossil fuel available than we can afford to burn. We have too much coal already.

TOO NEAR SELLAFIELD
* The extraction of millions of tonnes of coal is a known to be a cause of man made seismic activity.

* The drifts would extend to five miles from Sellafield. The Environmental Impact Assessment of WCM incredibly makes no mention of the risks of man made seismic activity despite being so close to the world’s most hazardous nuclear installation, Sellafield.

* Coking Coal is nothing new, it was first burnt in Cumberland centuries before the nuclear age. Even if coking coal was “needed” now in the 21st century, given the proximity and vulnerability of Sellafield this is not the time or the place.

Emphasis our own. Original, Links and More Info here: https://keepcumbriancoalinthehole.wordpress.com/letter-to-send-to-cumbria-county-council/

PLANNING REFERENCE NO 4/17/9007.
Write to Cumbria County Council to oppose by mail, email or online by the 10th July 2017 for opinions to be considered by CCC. http://councilportal.cumbria.gov.uk/mgUserInfo.aspx?UID=217 A copy of the planning application is supposed to be found on the CCC planning website, but we were unable to locate it. So it may or may not be there.

“The Barrow-in-Furness Earthquake of 15 February 1865: Liquefaction from a Very Small Magnitude Event” Musson, R. Pure appl. geophys. (1998) 152: 733. doi:10.1007/s000240050174 “Analysis shows that the felt area of the earthquake was probably only about 200 km2; however, heavy damage occurred in the village of Rampside and the maximum intensity is assessed at 8. Liquefaction is not uncommon at this intensity, but such a high intensity is not usually produced by such small erathquakes. The magnitude was probably in the range 2.5–3.5 ML.“