Trump says that Kissinger has been his friend “for a long time.”

As of 10 February 2012: “Old friends: Henry Kissinger and Vladimir Putin have met nearly 10 times and once dined in Kissinger’s home in New York. Their last Moscow meeting took place in January, while Putin was fighting for his political future…” https://www.opendemocracy.net/od-russia/fyodor-lukyanov/putin-russia-and-west-rising-above-stereotypes At least 3 meetings between Putin and Kissinger have occurred since January of 2012, including a February 2016 meeting at Putin’s home. 94 year old Kissinger, just won’t go away. 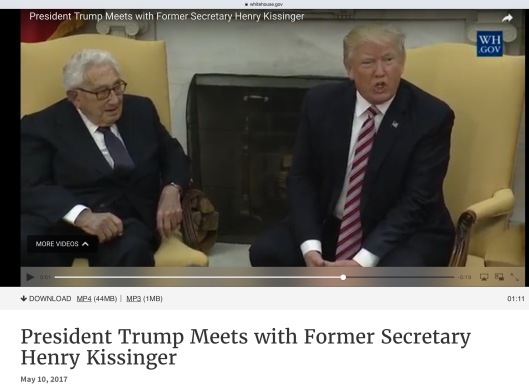 “After the Lavrov session had concluded, members of the U.S. media were allowed into the Oval Office, where they found the president sitting with Henry Kissinger, who served as President Richard Nixon’s secretary of state. The meeting hadn’t been listed on the president’s official schedule.” Read the article here: http://www.npr.org/sections/thetwo-way/2017/05/10/527755991/trump-meets-with-russias-lavrov-at-the-white-house-today

Kissinger Associates is a member of the “U.S.–Russia Business Council”
https://en.wikipedia.org/wiki/U.S.–Russia_Business_Council

A few of Kissinger-Putin meetings as found online:
“Meeting with Henry Kissinger: Vladimir Putin met with former US Secretary of State Henry Kissinger at his Novo-Ogaryovo residence outside Moscow. February 3, 2016” http://en.kremlin. ru/events/president/news/51264

Tim Geithner, who was the CFIUS lead in relation to the selling of US uranium mines-processing to Russian Gov owned Rosatom, which answers to Putin, used to work for Kissinger Associates:
“Wednesday, October 6, 2010
(WASHINGTON) – U.S. Rep. Ileana Ros-Lehtinen (R-FL), Ranking Republican on the House Foreign Affairs Committee, sent a letter yesterday to U.S. Treasury Secretary Timothy F. Geithner calling on the Committee on Foreign Investment in the United States (CFIUS) to block the sale of a U.S. uranium processing facility to a subsidiary of the Russian government-owned nuclear agency Rosatom. Ros-Lehtinen was joined in the letter by U.S. Reps. Spencer Bachus (R-AL), Peter T. King (R-NY), and Howard P. “Buck” McKeon (R-CA), the Ranking Members of the House Committees on Financial Services, Homeland Security, and Armed Services, respectively. Full text of the letter is included below. Joint statement by Ros-Lehtinen, Bachus, King, and McKeon:

“Signing over control of this U.S. uranium processing facility to the Russian government unnecessarily jeopardizes U.S. security interests. The transaction could give Moscow control of up to 20 percent of the U.S. national uranium extraction capability and a controlling interest in one of the country’s largest uranium mining sites.

“Russia’s record of transferring dangerous materials and technologies to rogue regimes, such as those in Iran and Syria, is very troubling. Its willingness to provide nuclear assistance to any regime with cash and its repeated attempts to undermine U.S. nonproliferation efforts disqualifies Russia from being regarded as a reliable partner.

“We believe that this potential takeover of U.S. nuclear resources by a Russian government-owned agency would pose great potential harm to the national security of the United States, and we urge the Committee on Foreign Investment in the United States (CFIUS) to block the sale.”

NOTE: ARMZ Uranium Holding Co., the mining arm of Rosatom, bought a 51 percent share of Uranium One, Inc. on August 31. Uranium One USA, the American subsidiary of Uranium One, Inc., operates a uranium processing facility in Wyoming.” http://archives.republicans.foreignaffairs.house.gov/news/story/?1618

From 1985-1988 Timothy Geithner was a consultant for Kissinger Associates:
https://www.opensecrets.org/revolving/rev_summary.php?id=78265