France appears to have spared itself its own presidential Russiagate with Macron winning by 66 % vs slightly under 34 % for Le Pen. But US Russiagate continues with a major hearing. Live stream links and article below. Yates in 2015. 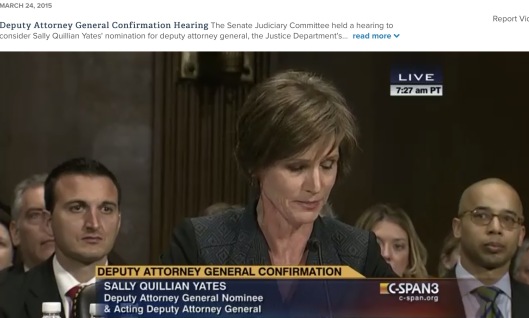 “Agenda May 4, 2017  NOTICE OF COMMITTEE HEARING  LOCATION CHANGE
The Senate Committee on the Judiciary, Subcommittee on Crime and Terrorism hearing entitled: “Russian Interference in the 2016 United States Election” on Monday, May 8 at 2:30 p.m., will now be held in Room 216 of the Hart Senate Office Building.
By order of the Chairman.
Witnesses
* The Honorable Sally Q. Yates Former Acting Attorney General of the United States  Atlanta, GA
* The Honorable James R. Clapper Former Director of National Intelligence of the United States  Fairfax, VA livestream here: https://www.judiciary.senate.gov/meetings/russian-interference-in-the-2016-united-states-election (This link still has the video of the hearing too.)

MAY 8, 2017
Russian Interference in 2016 Election Former Acting Attorney General Sally Yates and former Director of National Intelligence James Clapper testify at a Senate Judiciary subcommittee hearing Russian interference in the 2016 presidential election. THIS PROGRAM HAS NOT YET AIRED
Airing LIVE Monday, May 08 2:30pm EDT on C-SPAN3 live stream here“: https://www.c-span.org/video/?427577-1/sally-yates-james-clapper-testify-russian-interference-2016-election [Update: This link has the video of the hearing still too.]

From the VOA:
“US Senate Panel Taking New Look at Russian Meddling in Presidential Election
May 07, 2017 3:58 PM, by Ken Bredemeier WASHINGTON —
A U.S. Senate panel is taking a new look Monday into the extent of Russian meddling in last year’s presidential election, even as President Donald Trump continues to dismiss Moscow’s interference.

The Senate Intelligence Committee is hearing testimony from Sally Yates, who was briefly acting attorney general, the country’s top law enforcement official, in the early days of the Trump administration before the new president fired her.

She had been a key Justice Department official under former president Barack Obama and is expected to answer questions about warnings she gave the incoming administration about discussions that Michael Flynn, the retired Army general Trump had named as his national security adviser, was having with Russia’s ambassador to Washington.

Flynn served only 24 days in the key White House post before Trump fired him after U.S. intercepts of Flynn’s conversations with Sergey Kislyak showed that Flynn had lied to Vice President Mike Pence and others about his contacts with the Russian diplomat. Yates feared that as a result of his denial of the contacts, Flynn might be vulnerable to blackmail.

In addition, James Clapper, Obama’s director of national intelligence, is expected to testify. He was instrumental in the U.S. intelligence community’s conclusion that Russia sought to boost Trump’s chances of winning by hacking into the computer of the campaign chief for his opponent, former U.S. Secretary of State Hillary Clinton.

Clinton last week partly blamed her upset loss to Trump on the daily release of the emails just before the November election.

Trump, not wanting to give credence to any election happenstance that might undermine the legitimacy of his victory, continues to downplay the congressional investigations of Russian meddling and a probe by the Federal Bureau of Investigation, the country’s top law enforcement agency, into whether Trump campaign aides colluded with Russian interests to help him win.

He again last week rejected the official view that Russia hacked into the computer of Clinton campaign chief John Podesta, saying that it “could have been China, could have been a lot of different groups.”

In a Twitter comment, Trump said, “The phony Trump/Russia story was an excuse used by the Democrats as justification for losing the election.” http://www.voanews.com/a/us-senate-hearing-russia-election-meddling/3841573.html