Trump seems to have a number of impeachable charges covered. When there is so much happening, and so much to do, for him to tweet insults to Arnold Schwarzenegger about a television show is all the more inane and childish. Senator Sanders went south this weekend to Mississippi to protest abuses by Nissan against its workers. Trump apparently woke up early with the chirping Florida birds and started writing inane tweets. Why didn’t he go on over to Mississippi to show he cares about working people – because he doesn’t. Sanders got only a small percentage of the Mississippi vote, but he went down there. Florida is a lot closer to Mississippi than Vermont is. Now everyone sees why the President is traditionally a senior statesman. 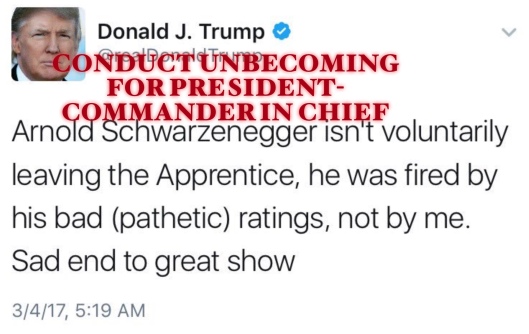 “The charge of high crimes and misdemeanors covers allegations of misconduct peculiar to officials, such as perjury of oath, abuse of authority, bribery, intimidation, misuse of assets, failure to supervise, dereliction of duty, conduct unbecoming, and refusal to obey a lawful order. Offenses by officials also include ordinary crimes, but perhaps with different standards of proof and punishment than for nonofficials, on the grounds that more is expected of officials by their oaths of office…
High crimes and misdemeanors is a phrase from Section 4 of Article Two of the United States Constitution: “The President, Vice President and all civil Officers of the United States, shall be removed from Office on Impeachment for, and Conviction of, Treason, Bribery, or other high Crimes and Misdemeanors.”
https://en.wikipedia.org/wiki/High_crimes_and_misdemeanors

“Impeachable conduct does not appear to be limited to criminal behavior. Congress has identified three general types of conduct that constitute grounds for impeachment, although these categories should not be understood as exhaustive: (1) improperly exceeding or abusing the powers of the office; (2) behavior incompatible with the function and purpose of the office; and (3) misusing the office for an improper purpose or for personal gain.” “Impeachment and Removal Jared P. Cole Legislative Attorney Todd Garvey Legislative Attorney” October 29, 2015 Congressional Research Office: https://fas.org/sgp/crs/misc/R44260.pdf

So, shouldn’t he be subject to the military’s “conduct unbecoming”?