Filtered chimney at Windscale ( Sellafield)Cockcroft Folly
1957 Windscale Nuclear Accident: “Without the filters – installed at the last minute by Nobel Prize-winning scientist Sir John Cockcroft – the effects of the radioactive dust blasted into the Cumbrian air would have been much more devastating./ “Radioactive dust did escape, but the filters caught about 95 per cent of it,” says Christopher Cockcroft, Sir John Cockcroft’s son.” “Windscale Piles: Cockcroft’s Follies avoided nuclear disaster” By Duncan Leatherdale, BBC News, 4 November 2014 http://www.bbc.com/news/uk-england-cumbria-29803990

“Clearly, a high-capacity filter would help protect the public from becoming exposed to radioactive releases if there were venting from either the drywell or wetwell (in cases in which the suppression pool was ineffective at scrubbing and retaining radionuclides)…. a 2005 Nuclear Energy Institute (NEI) document on severe accident mitigation alternatives analysis states that the estimated cost of a filtered containment vent would be three million dollars and that the “upper bound estimate benefit” of installing a filtered vent would be zero dollars. .. The potential impact of an unfiltered radioactive release in the event of a severe accident is quite large when considering the possible loss of agricultural economic activity and associated lands, the evacuation and suspension of industrial centers, and the cost of the decontamination of farmlands and city housing… The author recommends that a hardened vent be designed so that it would perform well in scenarios in which there were rapid containment-pressure increases; for example, in scenarios in which there was a reflooding of an overheated reactor core. If such a vent cannot be developed, the NRC should perhaps consider either shutting down or not relicensing BWR Mark I and Mark IIs“”Post-Fukushima Hardened Vents with High-Capacity Filters for BWR Mark Is and Mark IIsBy Mark Leyse, Nuclear Safety Consultant, A Project Completed for NRDC, July 2012, and submitted to the US NRC. (See entire document at bottom)

(Public estimation based on half of time. In reality the public will almost certainly get less than half.)

“NRC staff will meet with the public and industry representatives Jan. 7 to discuss efforts to resolve three long-term issues raised by the Fukushima nuclear accident in 2011. The staff will discuss recommendations regarding enhanced reactor monitoring instrumentation, hardened vents for certain containment designs and hydrogen control.

The meeting will run from 1-4:30 p.m. on Jan. 7 in room O9B4 of the NRC’s White Flint complex at 11555 Rockville Pike in Rockville, Md. NRC staff will describe the recommendations and the basis for resolving them. The public will have the opportunity to ask questions and provide comments regarding the staff’s work” http://www.nrc.gov/reading-rm/doc-collections/news/2015/15-089a.pdf This is a distortion and close to a bald-face lie. The NEI nuclear lobby group is presenting, along with the NRC. The public is only allowed to ask questions or comment. No nuclear safety group is being asked to present, even though there are many with great expertise

This is more honest: “Public Meeting with the Nuclear Energy Institute (NEI) to Discuss Staff Evaluation of Hydrogen Control, Vent Designs for other than Mark I and Mark II Containments, and Enhanced Instrumentation Associated with Fukushima Open Recommendations” Agenda: http://pbadupws.nrc.gov/docs/ML1535/ML15351A003.pdf

NEI is governed by a 47-member board of directors. The board includes representatives from the nation’s 27 nuclear utilities, plant designers, architect/engineering firms and fuel cycle companies. Eighteen members of the board serve on the executive committee, which is responsible for NEI’s business and policy affairs.” https://en.wikipedia.org/wiki/Nuclear_Energy_Institute
See also: http://www.sourcewatch.org/index.php/Nuclear_Energy_Institute

NRC document discusses containment-hydrogen issues for Mark III Reactors, as well as two types of PWR (Pressurized Water Reactors): http://pbadupws.nrc.gov/docs/ML1525/ML15254A016.pdf This is large number of reactors. The meeting seems to be about these reactors. Nonetheless, it is time to revive discussion of need for vent filtration for all reactor types (see further below).

Under Papa Bush it was ruled that 90% of the US NRC budget, with some exceptions, should be recovered through licensing fees: http://www.appropriations.senate.gov/imo/media/doc/hearings/EW%20NRC%20Chairman%20Burns%20Statement%20030415.pdf However, it is still part of the budget. It should not mean that the NRC is somehow owned by the nuclear industry, but they seem to think it is.

The NEI vaunts the SAFER FLEX program, the inadequate stupidity of which may become apparent over the next weeks as the Mississippi River flood moves south, barring good luck: https://miningawareness.wordpress.com/2015/08/23/nuclear-safer-not-nuclear-emergency-backup-in-heart-of-new-madrid-quake-zone/ It depends largely on private helicopter operators who could have more lucrative business, and then the backup is the National Guard, who will have their hands full, as well, in the event of a natural or other disaster.

Mark III reactors can also be problematic: https://miningawareness.wordpress.com/2015/01/01/dangerous-maximum-extended-load-line-limit-plus-for-largest-us-nuclear-reactor-urgent-comment-demand-hearing-now/
The US NRC allows potential reactor pressure vessel failure with plus or minus 20% uncertainty, i.e. 40% total uncertainty at America’s largest single reactor, a Mark III Reactor. Furthermore, there seems to be a more general side-stepping of statistical method. https://miningawareness.wordpress.com/2015/05/01/us-nrc-safety-abuses-alert-comment-deadline-april-30-at-11-59-eastern-time-request-hearing-by-1-june/

According to Bloomberg, the NEI CEO, Mr. Fertel, has a BS in civil engineering from Northeastern University (Boston) and an MS in civil engineering from the Polytechnic Institute of Technology (New York), but here’s the kicker: According to Bloomberg, Fertel “has participated in the doctorate of public administration programme at New York University.” 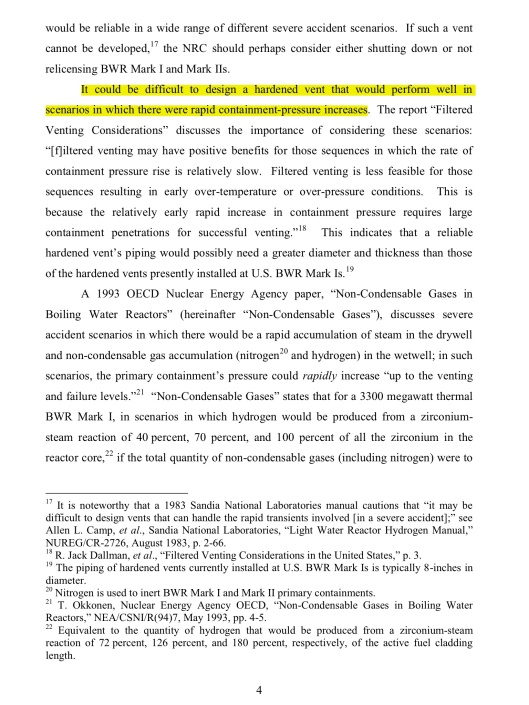 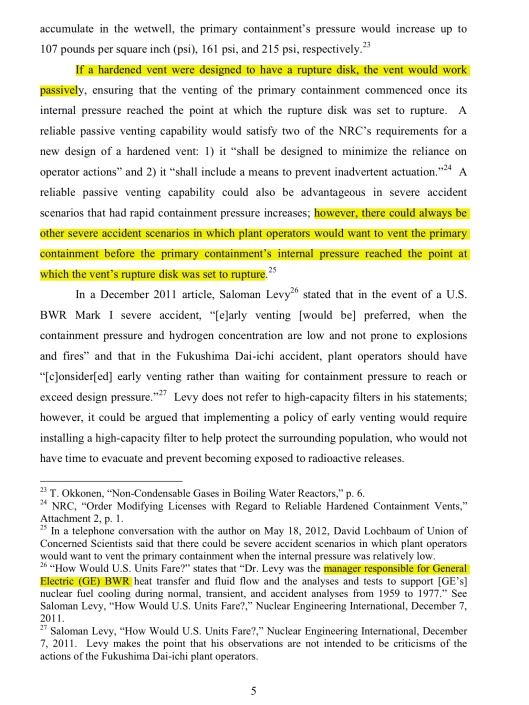 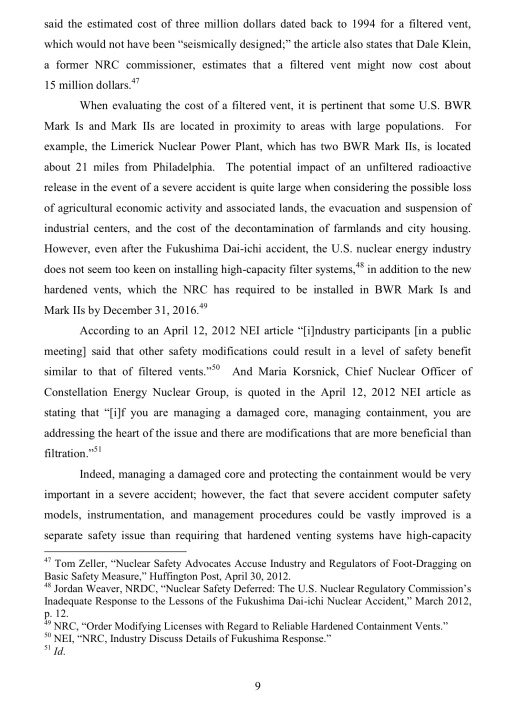 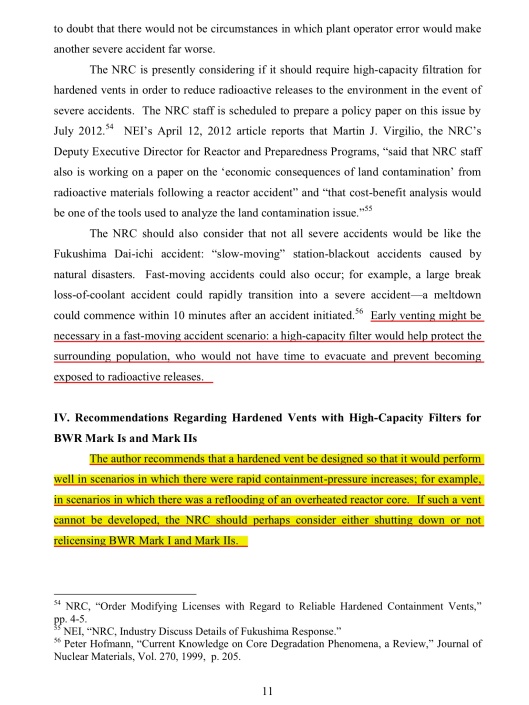 “Post-Fukushima Hardened Vents with High-Capacity Filters for BWR Mark Is and Mark IIs” By Mark Leyse, NRDC, July 2012, submitted to the US NRC: ML1225/ML12254A865 http://pbadupws.nrc.gov/docs/ML1225/ML12254A865.pdf (Yellow highlight; red underline our own. See original at link)
If you appreciate the document you may want to donate to the NRDC: https://www.nrdc.org It is tax deductible.