Former US NRC Counsel Peter Crane on the proposed 100 mSv rule: “Through the RADSAFE online bulletin board, I recently learned that Dr. Carol S. Marcus, a former member of this Committee, filed a petition for rulemaking with the NRC on February 9, 2015. I urge the members of the Committee and other concerned persons in the NRC community to give this document close attention. Not only is it of interest in and of itself, its extremism serves to illuminate the intellectual underpinnings of the Patient Release Rule, which derives from an earlier petition for rulemaking from Dr. Marcus, filed in 1990 and later amended. Regrettably, the Commission did not then appreciate the extent to which Dr. Marcus’s views deviated from the mainstream.” http://pbadupws.nrc.gov/docs/ML1510/ML15105A475.pdf (Emphasis our own).

While it is easy to get an idea of who Ed Calabrese is working for, in the case of Carol Marcus, the 100 mSv petitioner, who alleges radiation is good for you, it’s not so clear. She did her Residency in Nuclear Medicine at the Veterans Administration Wadsworth Medical Center. Perhaps her nefarious activities are partially funded by the US military, as is the case of Ed Calabrese? Or the VA? She has also worked as an expert witness, and at UCLA. The following document by former USNRC Counsel, Peter Crane, alleges that she said that she wrote another petition at the request of the NRC. Her successful previous petition resulted in public endangerment, which is still ongoing. [See update re Carol Marcus-UCLA-Human Plutonium Experiments at bottom.]

If true, this raises other questions regarding who the NRC Staff was actually working for, and if she was paid for the work.

Remember that authorities give out potassium iodine to protect from radioactive iodine 131, half life 8 days, after a nuclear accident. Thus, hospitals could easily hold the patient effluents until they became non-radioactive, except the insurance companies wouldn’t want to pay. 30 millicuries is 1,110,000,000 becquerels (radioactive shots per second).

Peter Crane’s credentials are in a footnote. He states that he regrets having not filed a petition for review in the US Court of Appeals. 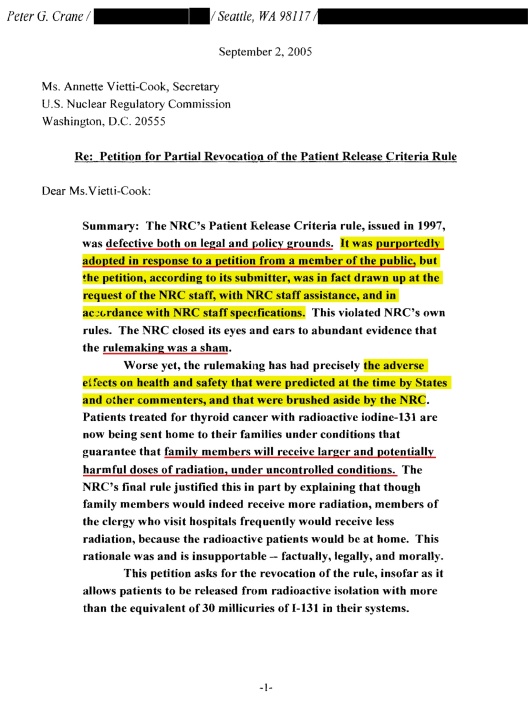 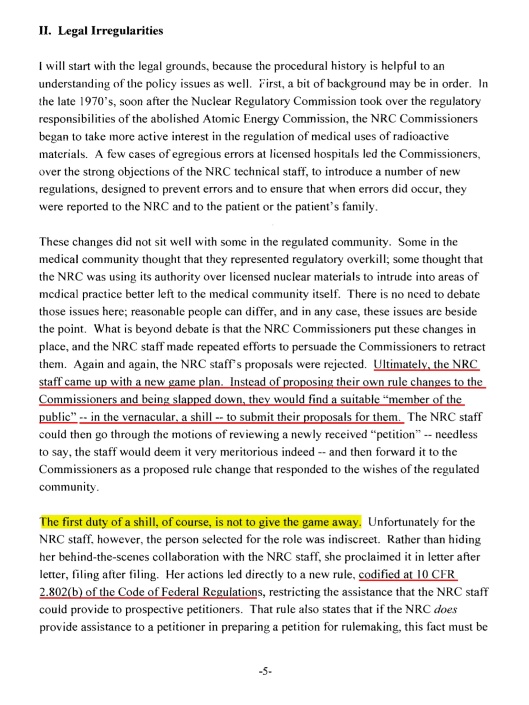 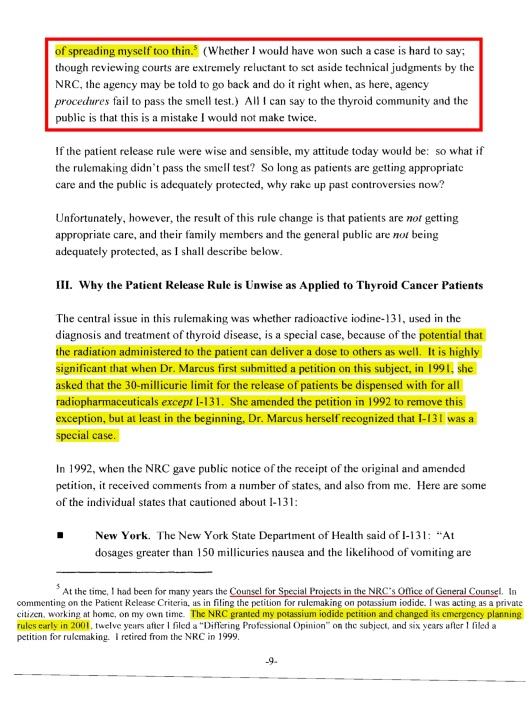 Re: Petition for Partial Revocation of the Patient Release Criteria Rule, September 2,2005, Original 18 pp. found here: http://www.regulations.gov/contentStreamer?documentId=NRC-2005-0020-0001&disposition=attachment&contentType=pdf Yellow highlight-red underline added.
We put the above information up as food for thought. It may or may not be true. You decide.

“In August 1947, General Groves urged Major General Paul Hawley, the director of the medical programs of the Veterans Administration, to address medical problems related to the military’s use of atomic energy. Soon thereafter, Hawley appointed an advisory committee, manned by Stafford Warren and other medical researchers. The advisers recommended that the VA create both a “publicized” program to promote the use of radioisotopes in research and a “confidential” program to deal with potential liability claims from veterans exposed to radiation hazards. The “publicized” program soon mushroomed, with Stafford Warren, Shields Warren, and Hymer Friedell among the key advisers. By 1974, according to VA reports, more than 2,000 human radiation experiments would be performed at VA facilities, 48 many of which would work in tandem with neighboring medical schools, such as the relationship between the UCLA medical school, where Stafford Warren was now dean, and the Wadsworth (West Los Angeles)VA Hospital.” AdvisoryCommittee onHumanRadiation Experiments, Final Report, October 1995” https://archive.org/stream/advisorycommitte00unit/advisorycommitte00unit_djvu.txt
And, where did Carol Marcus, spear-heading the 100 mSv radiation is good for you proposal, do her residency? Wadsworth (West LA) VA Hospital! And, she is affiliated with the UCLA Med School. Stafford Warren was its first Dean: https://en.wikipedia.org/wiki/Stafford_L._Warren

Don’t let the wicked witch of UCLA get her way! Tell everyone you know to comment by November 19th. This is dead serious http://www.regulations.gov/#!docketDetail;D=NRC-2015-0057