Candidate Obama said: “I don’t think there’s anything that we inevitably dislike about Nuclear Power. We just dislike the fact that it might blow up and irradiate and kill us“. (Keene Sentinel Interview, 2007)

Under President Obama’s EPA: “States will be able to get credit for nuclear energy plants that are under construction, as well as for upgrading plants and preserving those at risk of early retirement, the EPA said. Nuclear currently provides around 20 percent of the U.S. energy mix.” (Reuters, Sunday, 2 August 2015) [1] It is important to recall that nuclear energy creates a carbon footprint from mining to uranium processing to make the fuel to the cooling of nuclear waste for years and the guarding of nuclear waste for perpetuity. It also produces greenhouse gases, such as ozone, through radiolysis. It directly produces Krypton which is a greenhouse gas precursor.

President Jimmy Carter in July of 1979: “I will soon submit legislation to Congress calling for the creation of this Nation’s first solar bank, which will help us achieve the crucial goal of 20 percent of our energy coming from solar power by the year 2000.“

Former President Jimmy Carter in July of 2015 on the US:
“Now it’s just an oligarchy with unlimited political bribery being the essence of getting the nominations for president or to elect the president.” Jimmy Carter on the Thom Hartmann show, July 28, 2015: http://www.addictinginfo.org/2015/08/02/jimmy-carter-the-u-s-is-an-oligarchy-with-unlimited-political-bribery-video/ Original video: http://youtu.be/hDsPWmioSHg

Of course, if you didn’t know it before, you have been sleeping as long as Rip Van Winkel. It can probably easily be argued that the US has always, or almost always, been an oligarchy. Read or listen to some Huey Long, assassinated 80 years ago next month, and to some William Jennings Bryan, who believed that the US had fallen under control of London bankers. But it’s more and more overtly an oligarchy.

Carter (2008) forever in blue-jeans in his 80s, proving that jeans were a way of life for him and not a campaign hoax. 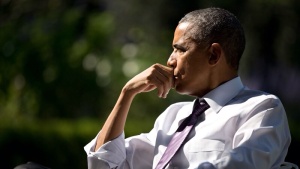 Obama fancies himself a JFK. But, JFK worked to stop above ground nuclear weapons testing, because he understood that the radionuclides were dangerous for public health. Obama clearly doesn’t care about public health and safety.

The difference between Obama and Jimmy Carter is striking. It’s not just that Obama is a slick suit man who favors the Wall Street “suits”. Nor, that Jimmy Carter brought bare feet, jeans, and cardigan sweaters to the White House. Carter also brought solar. The radical nature of Carter’s position during the Cold War, when there was some sense in nuclear to make weapons for nuclear deterrence, stands in stark contrast to Obama’s radically backwards position of promoting nuclear energy decades after the Cold War ended. Even Carter was a bit behind the times as solar cars had been promised to the American public, as a soon to be available technology, in 1970. It is worth noting that the shift in attire from jeans to suits, also represents a shift in US attitude from the hard work ethic still existent under Carter to the easy money Wall Street suit ethos, which came in the Reagan years, with the dismantlement of American industry and of the American dream. In recent decades the only hope for the average American is winning the lottery. Education only leads to student loan debt; hard work leads to unemployment. Who can care if nuclear power may kill them in the future, if they and their children are starving today? The American work ethic largely died when companies started rewarding hard work with unemployment, along with the demise of the small farmer. Ironically Americans work harder than ever before, and the only vacation for the average person is unemployment (unlike the Swiss, French and Germans, who appear on perpetual vacation, e.g. Mary goes to heaven holiday; Jesus goes to heaven, etc.). But the joy is lacking because the social contract has been increasingly destroyed, especially starting with the Reagan years. This isn’t the first unemployed “lost” generation. The ideas of honesty, thrift and hard-work are close to dead in America.

“Today, in directly harnessing the power of the Sun, we’re taking the energy that God gave us, the most renewable energy that we will ever see, and using it to replace our dwindling supplies of fossil fuels… Today, I am sending to the Congress legislative recommendations for a new solar strategy that will move our Nation toward true energy security and abundant, readily available energy supplies.” http://www.presidency.ucsb.edu/ws/?pid=32500 From President Jimmy Carter: “Solar Energy Remarks Announcing Administration Proposals.“, June 20, 1979 (worth the read in its entirety).

Carter has shown repeatedly that he is able to change his mind when new facts come in, as when he left the Southern Baptist church due to their hardline official positions against women. Obama knows the facts, he just ignores them. Jimmy Carter started off on a diesel submarine in the US Navy and ended up in the early nuclear Navy program in 1952. However, after seeing both Canada’s Chalk River nuclear disaster, which he helped clean-up, and Three Mile Island, he had an apparent change of heart. Shortly after Three Mile Island, he put solar panels on the White House (removed by Reagan) and started pushing solar harder, although he appears to have started before Three Mile Island: “Just as a similar synthetic rubber corporation helped us win World War II, so will we mobilize American determination and ability to win the energy war. Moreover, I will soon submit legislation to Congress calling for the creation of this Nation’s first solar bank, which will help us achieve the crucial goal of 20 percent of our energy coming from solar power by the year 2000.” http://www.cartercenter.org/news/editorials_speeches/crisis_of_confidence.html “Crisis of Confidence by Jimmy Carter, 15 July 1979

Today, it is noteworthy that for the Washington DC and London elites solar is now good, but nuclear energy is still forced upon mostly poor rural areas. Thus, Obama’s solar panels have a different sense than Carter’s did. Carter was with America. Obama is clearly with the bankers and the utilities.

Carter isn’t the first nuclear expert to have a change of heart. This shouldn’t be surprising because a true, intelligent, nuclear expert has to recognize that the best, safest, and cheapest nuclear energy is available in the sun.

The inventor of the Pebble Bed reactor, Farrington Daniels, became the foremost solar advocate well before Germany latched on to this failed technology, which had already been rejected by the US government. Now, Germany expects to dump the nuclear waste from the failed Pebble Bed reactor on the US. Half was already processed in Scotland, leaving nuclear waste behind, which is to be placed in a facility which strikingly resembles Ireland’s Newgrange prehistoric mound. Considering the proximity of the Skara Brae prehistoric village, this may be the death of future archaeologists.

Candidate Obama on Nuclear Power: “It Might Blow & Irradiate & Kill Us“

At 3:51 http://youtu.be/xRxl2cVFTLw Obama says that he wants to put his views on Nuclear Power on the record. He says that IF we can make it safe; IF we know how to store it; IF it is not vulnerable to terrorist attacks and IF it is not enhancing nuclear proliferation it might be ok. However, IF these are not solvable [and they haven’t been solved], he doesn’t want to invest in it. He says “I don’t think there’s anything that we inevitably dislike about Nuclear Power. We just dislike the fact that it might blow up and irradiate and kill us“.

Earlier in the interview with the Keene Sentinel, on November 25, 2007, he said that the NRC is a moribund agency captive of industry. He said the same thing about the FDA, EPA, and other Federal agencies. He says that they have been filled with cronies and lost their sense of mission.

So, President Obama knows that Nuclear Power is dangerous. He knows! He doesn’t appear to necessarily know that nuclear fuel production, nuclear power stations, and nuclear waste all legally leak deadly, long-lived, radionuclides into the environment. Surprisingly most people don’t. Even those who do know think that it’s illegal and would never imagine that it would be legally allowed to dump dangerous radionuclides into the air, water and earth.

Was candidate Obama deceiving people intentionally? Or did he think he would bite the hand of his campaign contributors? Was he, or his family, threatened? It is important to look carefully at Hillary’s energy plan too. She has lots of solar, but has the, apparently obligatory, nuclear research pork barrel thrown in. Bernie Sanders is the clearly anti-nuclear candidate. If you disagree with his other opinions, it doesn’t really matter, because if there’s a major nuclear accident in the US none of the rest will matter anymore. That’s why we are here day after day and night after night. We’ve the money and chance to do far more fun things, but none of the rest will matter if the nuclear industry isn’t shut down, and a solution found-implemented for the radioactive waste.

Democrat Barack Obama has come under fire for his ties to Exelon Corp, the largest operator of nuclear reactors in the United States and one of his most generous financial backers. When Exelon failed to disclose radioactive leaks at one of its nuclear plants, Obama tried to push through a bill in the Senate last year that required such plants to notify state and local authorities of such cases, the New York Times reported last week. According to the Times, the final proposal was a watered-down version of the original legislation that “played into the hands of the nuclear power industry.” Obama has collected at least $222,000 from Exelon employees for his presidential campaign, making the company his eighth largest contributor last year. The Illinois senator received 10 times more than Republican John McCain, who brought in the second largest haul from Exelon. Ninety percent of the company’s total $249,000 in contributions went to Democrats, but the only other Democrat to get money from Exelon was Bill Richardson, who collected $2,250. Five Republican candidates got money from the nuclear reactor operator.” (Open Secrets, CC-BY-NC-SA) http://www.opensecrets.org/news/2008/02/nuclear-energy-company-backs-o/ https://creativecommons.org/licenses/by-nc-sa/3.0/