They claim to have not anticipated enriching so much uranium in the US, when the earlier rules were written. This appears strange, because that’s when many nuclear reactors were just recently built, and some still under construction, though it was a few years after the Three Mile Island nuclear accident. Perhaps they didn’t plan on enriching uranium to be exported to other countries, as appears currently the case?

But, there seems to be more to it than that. The real issue here appears to be the diluting of nuclear waste with fillers of various sorts (or mixing more and less radioactive waste together), so that it can be declared sufficiently low level waste for responsibility to be passed down to States; it can be buried; even sent to landfills, or released to the public, depending on dilution level.

The NRC claims that blending is a mixing of more and less radioactive wastes, but the classification of low level waste allows dilution. And blending is still dilution: “Blending, as defined here, refers to mixing of LLRW of different concentrations. It does not mean mixing radioactive waste with non-radioactive waste (i.e., dilution) and concerns only disposal of the blended waste in a licensed facility, not its release to the general environment.” http://www.nrc.gov/waste/llw-disposal/llw-pa/llw-blending.html Either way, it’s a con game pure and simple.

In the same vein, the US NRC has a web site typo, which has remained uncorrected for an unknown length of time. We became aware of it almost one year ago. It allows radioactive waste which is even too radioactive to be placed in a transuranic facility, such as WIPP, to be classified as low level radioactive waste! The NRC page has been updated many times, and it remains uncorrected, so it now seems to be intentional.

Thus, the dilute and deceive scam perpetuated during nuclear reactor operations, whereby what is released into the environment is defined as concentrations in air and water, rather than amounts, and dilution is encouraged by both the NRC and the EPA, is used for reclassifying nuclear waste. This allows burial, sending to landfill, and even more general dispersal into the environment, depending on the dilution.

By reclassifying the nuclear waste, they are able to make it the responsibility of the States, as they explain. This corresponds to a long-standing US government trend, where they dump responsibilities on the States, without giving the States funding, apparently so they can squander the money in pork barrel ways. The US government has squandered billions, simply in bringing radioactive waste from foreign countries, mostly friendly foreign countries, like Sweden, to dump on America in the name of non-proliferation. That program will cost the US taxpayer $1.9 billion for 2016 alone, and it has been going on for years. Oh, maybe that is the origin of some of this new, unexpected, nuclear waste?

The 45 page NRC draft rule, or whatever it is, let the cat out of the bag early on in the document:
“Why do the regulatory requirements need to be revised?
Recently, the industry and the NRC have identified new LLRW streams that were not envisioned during the development of 10 CFR part 61. These LLRW streams include depleted uranium (DU) from enrichment facilities, LLRW from the U.S. Department of Energy (DOE) operations, and blended LLRW streams in quantities greater than previously expected”

“…. The blending of different classes of LLRW could also result in LLRW streams with concentrations that are inconsistent with the assumptions used to develop tables 1 and 2 of 10 CFR 61.55. Blending of LLRW would enable some materials that would otherwise have been disposed of as a higher class (e.g., Class B or Class C LLRW) to be blended with a lower class (e.g., Class A LLRW) or lower concentration LLRW of the same class. The result of the blending process would be to create large volumes of blended LLRW that have concentrations near the LLRW classification limits. The NRC did not evaluate the disposal of large volumes of LLRW with concentrations near the LLRW classification limits in the final regulatory basis for the current 10 CFR part 61. ” Federal Register / Vol. 80, No. 58 / Thursday, March 26, 2015 / Proposed Rules, pp. 16087-16088

Here they explain that reclassifying it allows them to dump the responsibility on the States:
“In addition to determining the acceptability of LLRW for disposal in a near-surface land disposal facility, the LLRW classification system is also integral to determining Federal and State responsibilities for LLRW and requirements for transfers of LLRW intended for disposal. The Low-Level Radioactive Waste Policy Act of 1980 (as amended in 1985) defines Federal and State responsibilities for the disposal of LLRW based on 10 CFR 61.55, as in effect on January 26, 1983. Specifically, the Act assigns responsibility for disposal of Class A, Class B, and Class C commercial LLRW to the States and responsibility for disposal of commercial LLRW with concentrations that exceed the limits for Class C LLRW to the Federal Government.” Federal Register / Vol. 80, No. 58 / Thursday, March 26, 2015 / Proposed Rules, 16085 http://www.gpo.gov/fdsys/pkg/FR-2015-03-26/pdf/2015-06429.pdf

Most of the following is from our September 4, 2014 post, about the typo on the NRC web site, which allows concentrations of long-lived alpha emitters, such as plutonium (transuranics), which would be too radioactive to be accepted into WIPP, to be classified as low level nuclear waste. Someone at the US NRC visited the blog in October and the error continues to stand, as of today, even though it was updated many times since. 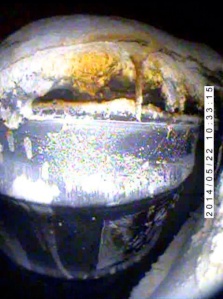 As you will see, an error in the US NRC “library” about the “Licensing Requirement for Land Disposal of Radioactive Waste“, is a simple typographical error with potentially dangerous consequences. Actually, it appears not even a typo but an unchecked cut and paste. Perhaps by the time you read this it will be already rectified, but the screen shot is below. (Update: As of Monday, July 21, 2015, it still has not been corrected! During the day of Oct. 8th and 9th this blog was visited by the NRC. This error has gone from looking like an accident to looking really bad to looking intentional. This is beyond criminal negligence. The NRC page says that it was Last Reviewed/Updated July 15, 2015.)

However, this sort of simple oversight could have led to the disaster at WIPP.

This simple error, in fact, could allow waste considered too radioactive for WIPP to go into low level radioactive waste dumps! [July 21 update: It also allows reclassifying of waste and releasing it to state responsibility, as just seen. Thus, it is probably intentional.]

The NRC missed the basic tenet of first grade (probably now kindergarten): always check your work. For something as critical as nuclear, there needs to be two or more checking the work. Furthermore, the original text, which is accurate, is not findable at the NRC web site.

If the NRC would have simply provided the original text, then there would not have been the opportunity for such a serious error. We had looked for the original, because we prefer an original pdf file. Seeing that something was amiss, we found the correct version first at the Cornell law school web site, and then found an official text at the US GPO web site. It is worth noting that Cornell law school was attentive enough to check their work – not make this mistake, whereas the NRC was not.

People should be worried. The standards are weak and un-protective, as is. If the nuclear industry is not stopped, the waste problem will only grow. Even if it is stopped, it will not go away. This is serious.

According to the NRC library site for “Alpha emitting transuranic nuclides with half-life greater than 5 years“, there is allowed up to 1100 curies per cubic meter. It is supposed to be 100 nanocuries per gram. There are 37 billion becquerels (radioactive disintegrations-emissions per second) in one curie. Whereas the maximum allowed for low level waste sites is supposed to be then 3,700,000 Bq/kg, the error allows roughly 40,700,000,000 Bq/kg [(m3=1000 liter is approximately 1000 kg (based on water at 4 C)]. Recall that a kilogram is 2.2 pounds. For this, although significantly over what should be allowed, at 1.1 curie per liter, we are still under the 23 curies per liter allowed for remotely handled, too dangerous to touch, waste at WIPP.

Therefore, waste 5 times more radioactive than that allowed in WIPP could be, or have been, placed in low level radioactive waste dumps, if a company-employee uses the NRC reading room, rather than using the Cornell law web site or the original GPO text! 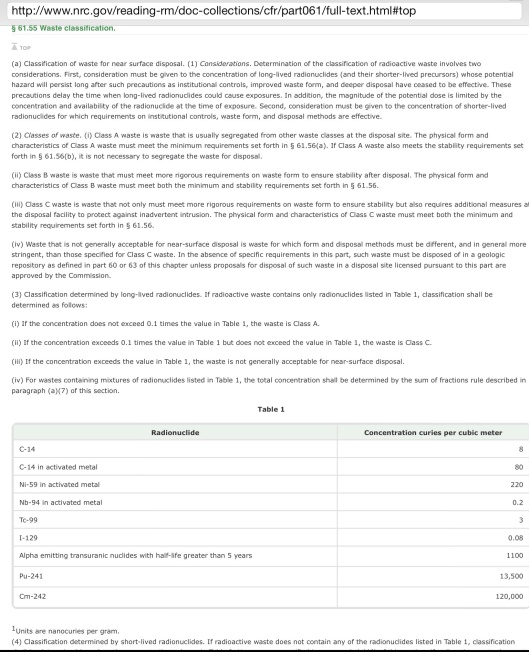 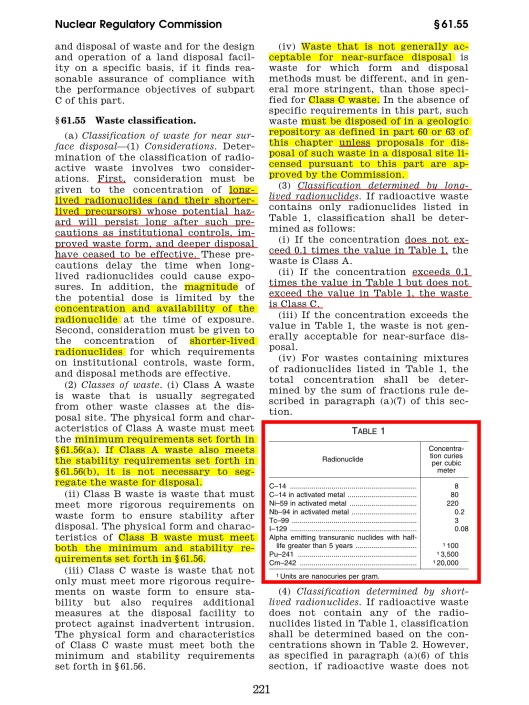 A now earlier comment period regarding low level radioactive waste ended on September 15, 2014: http://www.regulations.gov/#!documentDetail;D=NRC-2014-0080-0002 The law is available to start studying here: http://www.gpo.gov/fdsys/pkg/CFR-2011-title10-vol2/pdf/CFR-2011-title10-vol2-part61.pdf (There may be a 2012 or more recent version but this is all that we could find. The Cornell law school web site seems to tell when and if there were modifications, as do the sections on the NRC web site).

Regarding maximum radiation at WIPP:
“To confirm the total activity for compliance with LWA limits concerning the total waste inventory (i.e., no more than 5.1 million curies of RH TRU waste disposed; 23 curies per liter limit per canister) and to track radionuclides that are important to the calculation of releases (Regulatory basis: LWA, EPA Certification of the WIPP).
Type of data to collect:
Data on the activity of the waste in each container, including the activities and masses of 241Am, 238Pu, 239Pu, 240Pu, 242Pu, 233U, 234U, 238U, 90Sr, and 137Cs.”
“REMOTE-HANDLED TRU WASTE CHARACTERIZATION PROGRAM IMPLEMENTATION PLAN
DOE/WIPP-02-3214, Revision 3, September 19, 2012 , U.S. Department of Energy Carlsbad Field Office” http://www.wipp.energy.gov/rcradox/DOE-WIPP_02-3214_Rev_3.pdf

WIPP is supposed to be Transuranic, TRU, waste:
“Transuranic waste (TRU) is, as stated by U.S. regulations and independent of state or origin, waste which has been contaminated with alpha emitting transuranic radionuclides possessing half-lives greater than 20 years and in concentrations greater than 100 nCi/g (3.7 MBq/kg).[1]
Elements having atomic numbers greater than that of uranium are called transuranic. Elements within TRU are typically man-made and are known to contain americium-241 and several isotopes of plutonium.[2] Because of the elements’ longer half-lives, TRU is disposed of more cautiously than low level waste and intermediate level waste. In the U.S. it is a byproduct of weapons production, nuclear research and power production, and consists of protective gear, tools, residue, debris and other items contaminated with small amounts of radioactive elements (mainly plutonium). Under U.S. law, TRU is further categorized into “contact-handled” (CH) and “remote-handled” (RH) on the basis of the radiation field measured on the waste container’s surface. CH TRU has a surface dose rate not greater than 2 mSv per hour (200 mrem/h), whereas RH TRU has rates of 2 mSv/h or higher. CH TRU has neither the high radioactivity of high level waste, nor its high heat generation. In contrast, RH TRU can be highly radioactive, with surface dose rates up to 10 Sv/h (1000 rem/h)” http://en.wikipedia.org/wiki/Transuranic_waste The amounts of radiation allowed, according to the NRC reading room, were higher than RH TRU waste!

We hope that all of you have learned by now, if you hadn’t known it before, that you can’t trust the US NRC (Adapted from Willie McRae at the Mullwharcher inquiry re burying nuclear waste in Scotland). 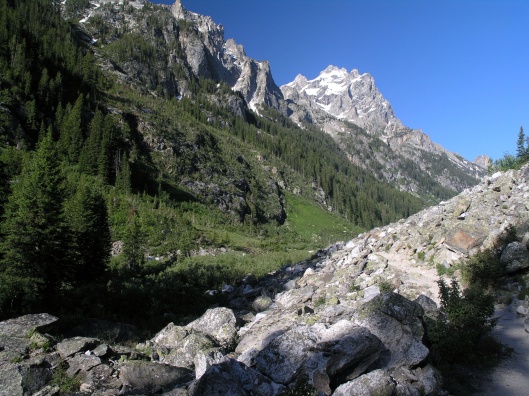