Japan’s new secrecy law is really truly fascism on the march. This is not fascism, as a term which has been too lightly thrown about in post-WWII decades, but appears the real thing. The current Prime Minister Shizo Abe is the grandson of Nobusuke Kishi, held as a Class A World War II war criminal, but who somehow got let off the hook, as too many did, and even became a post-war Prime Minister. Class A charges were “brought against Japan’s top leaders who had planned and directed the war….The indictment accused the defendants of promoting a scheme of conquest that ‘contemplated and carried out … murdering, maiming and ill-treating prisoners of war (and) civilian internees … forcing them to labor under inhumane conditions … plundering public and private property, wantonly destroying cities, towns and villages beyond any justification of military necessity; (perpetrating) mass murder, rape, pillage, brigandage, torture and other barbaric cruelties upon the helpless civilian population of the over-run countries.” http://en.wikipedia.org/wiki/International_Military_Tribunal_for_the_Far_East Should we hold anyone responsible for the actions of their grandfathers? Normally not necessarily, but in this instance the answer seems to be a resounding yes!

Prime Minister Shizo Abe’s grandfather, Nobusuke Kishi, in 1935 “became one of the top officials involved in the industrial development of Manchukuo“, the puppet state which Imperialist Japan set up in northeast China and Inner Mongolia (i.e. Japanese occupation of Manchuria). Nobusuke Kishi “was later accused of exploiting Chinese forced labor. Prime Minister Hideki Tōjō, himself a veteran of the Manchurian campaign, appointed Kishi Minister of Commerce and Industry in 1941“. http://en.wikipedia.org/wiki/Nobusuke_Kishi http://en.wikipedia.org/wiki/Manchukuo The goal of the occupation of Manchuria appears to have been to grab hold of China’s resources. Slave labor in mines of this region fed Japan’s war machine.

Prime Minister Abe declares his religion as Shinto. However, this does not appear to be the nature appreciation-animist version, where kami (spirit) lives in all things. This nature-animist aspect of shinto is that which gives Tokyo its lovely shrine-green spaces with good ki from the trees.

Rather, the Shinto on the march today in Abe’s government appears a nationalist-ancestor worship version. Veneration of imperialist war criminal ancestors seems serious bad news. Of course, if he is seriously into this stuff, he may believe that the spirit of his fascist dead ancestor(s) will get him if he fails to honor them. That is, the ancestral kami boogey-man may get him. It probably doesn’t help that his grandfather Kishi was called Shōwa no yōkai (the Shōwa era monster/devil). http://en.wikipedia.org/wiki/Nobusuke_Kishi

But, Prime Minister Shizo Abe and the other pro-nuclear shinto officials are missing the part that radiation kills trees and all life. This is sure evidence of the dangers of a distorted religious view, if he and some other members of government fear their dead ancestors more than radiation. Or is the Kishi devil made me do it just an excuse? Is this the bushido honor and loyalty unto death of his Kishi, alleged samurai, ancestors? http://en.wikipedia.org/wiki/Samurai

Is Fukushima payback to the US for Hiroshima-Nagasaki to their deluded minds? Perhaps. However, it is falling on the Japanese people as well. Maybe Shizo Abe and his government don’t care about the Japanese people either, and only honor and loyalty to their dead ancestors. It is evident in their handling of Fukushima before and after the disaster that, as Japanese nationalists, they do not care who outside of Japan gets poisoned by Fukushima. But, they don’t seem to care who in Japan gets poisoned either.

They are trying to plug the information about the leaks, rather than the leaks, in the words of Bellona.org: 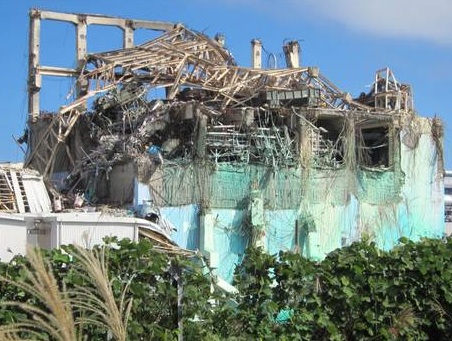 The Japanese government’s powerful lower house of Parliament passed a stiff new secrecy bill that would visit harsh penalties on bureaucrats who leak information, and reporters who seek it – a move environmentalists fear would allow official collusion and corruption of the kind unearthed during the Fukushima Daiichi nuclear disaster to flourish. By Charles Digges, 29/11-2013
The ruling block and its supporters hope the weaker upper house will pass the legislation next month, the Associated Press reported.

This, according to the Japanese press, will likely include information on the vulnerability of nuclear power plants – a keen area of interest to most Japanese and countries that surround it after the March 2011 Fukushima-Daiichi nuclear disaster which forced some 160,000 from their homes, and from which radioactive water continues to leak.

Apparently, frustrated that it can’t stop the leaks at Fukushima Daiichi, the Japanese government is taking a crack at stopping the leaks about the leaks. And officials caught leaking, stipulates the new law, could face as many as 10 years in prison.

Putting a tight lid on these kinds of unseemly radioactive emissions is especially important in light of the recent awarding by the International Olympic Committee of the 2020 Summer Games to Japan – a sort of pity plug for the situation the country has been plunged into by the nuclear disaster the government worked so hard to obscure”.
See the entire the article here: http://www.bellona.org/articles/articles_2013/japan_leak_law
[ As of 23 December 2013, link for this article has been moved to: http://bellona.org/news/nuclear-issues/2013-11-japan-tries-plug-leaks-leaks-donning-russias-mantle-nuclear-olympic-explosions ]

For more information about the Japanese gov Shinto connection take a look at
“Back to the future: Shinto’s growing influence in politics A small organization, little known to the public, has helped restore much of Japan’s controversial past — and it is only getting started” By David McNeill, Special to the Japan Times Nov 23, 2013 (available with an online search)