Putin speaks German and loves to surround himself with Germans. One day it will be admitted that Putin is ethnic German and possibly that he heads a German Reich. German Reich version 3.5? Or perhaps Austrian (Österreich)? “Waltzing with Putin: Russian president attends Austrian FM’s wedding” https://youtu.be/UxLmdjs6_AI 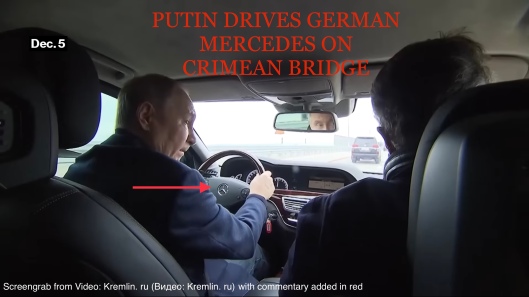 Link to Video of Putin in the Mercedes: https://youtu.be/ehViJ_xEmf8 According to Tass, video source is Kremlin ru (Видео: Kremlin. ru) https://t.me/tass_agency/170168
Guess who else liked to ride in a Mercedes?

It was a four lane motor vehicle bridge and is now apparently a two lane one.
“Putin drives across Crimea bridge in a Mercedes” By Guy Faulconbridge December 5, 202210:22 AM EST “Putin also walked along parts of the bridge, Europe’s largest, to inspect sections that are still visibly scorched.“ https://www.reuters.com/news/picture/putin-drives-across-crimea-bridge-in-a-m-idUSKBN2SP1D4

The person in the car doesn’t even look like “Putin”. There may have been two KGB Putins from the beginning, however: https://web.archive.org/web/20100602042944/https://www.telegraph.co.uk/news/worldnews/europe/russia/3568891/Could-this-woman-be-Vladimir-Putins-real-mother.html

“(Photo) Allies against the west: ten years before the Hitler-Stalin Pact, Soviet and German tankmen practice together at the secret Kama base 200 miles east of Moscow”
“In 1922, at Rapallo, when Hitler was still a marginal Munich loudmouth, the Soviets did a secret deal with the so-called Black (i.e. covert) Reichswehr. Unknown to the rest of the world, the German Army leased bases deep in Russia, where these strange new anti-Western bedfellows could share forbidden knowledge. The Hitler-Stalin pact merely took this alliance up again….” http://littleatoms.com/society-world/how-germanys-extreme-left-and-extreme-right-look-russia

All the Prussians Love the Russians: Germany’s Extreme Left and Extreme Right have Long Looked to Russia

“The Kama tank school (German: Panzerschule Kama) was a secret training school for tank commanders operated by the German Reichswehr near Kazan, Soviet Union. It operated from 1929 to 1933. The school was established in order to allow the German military to circumvent the military restrictions on tank research spelled out in the Treaty of Versailles. Apart from Kama, for the same reason Germany also operated the Lipetsk fighter-pilot school (1926–33) and a gas warfare facility, Gas-Testgelände Tomka (1928–31).[1]

Following the Nazi party’s rise to power, the school was closed and Germany’s Tank Force and Air Force were trained in Germany. It was codenamed “Kama” from the words Kazan and Malbrandt because the testing grounds were near Kazan and Oberstleutnant Malbrandt was assigned to select the location for testing.[2]

The Treaty of Versailles, signed on 28 June 1919, prohibited Germany from operating any form of tank or air force after the country had lost the First World War.[1] Germany had normalised its relations with the Soviet Union in 1922, with the signing of the Treaty of Rapallo.

Initially, Germany was unwilling to break the Treaty of Versailles. This attitude changed however in 1923, when French and Belgian troops occupied the Ruhr area after Germany defaulted on its payments of war reparations. In December 1926, Germany and the Soviet Union signed an agreement to establish a tank school on Soviet territory. The school was eventually opened in 1929 and served to train approximately 30 German tank specialists.[1][3]

After its opening, the school accommodated up to a dozen German officers at a time, training there for up to two years.[4] Apart from training officers, the school served German companies like Krupp, Daimler, and Rheinmetall as a development ground for new tank designs. Technicians worked on the designs that later became the Panzerkampfwagen I and II.[5]

Many of the officers training, instructing or visiting Kama later became high-ranking commanders in the Wehrmacht or its Panzerwaffe, among them Ernst Volckheim, Werner von Blomberg, Walter Model, Wilhelm Ritter von Thoma, Heinz Guderian[5] and Josef Harpe.[citation needed] However claims about training of Guderian are contested: allegedly, he visited Kama only once, as a member of inspection.[6]

It is claimed that a number of Soviet tank officers were also trained there.[7] However from the declassified German and Soviet documents one may conclude that the Soviet officers were mainly observers or assistants.[8]

In the early 1930s, the political situation for the tank school began to change. The Soviet Union opened itself to the West while Germany attempted a closer approach to France.[1]…”

FYI: Mulino is where German Rheinmetall company was building (in their own words):

After the mysterious attack on the bridge. 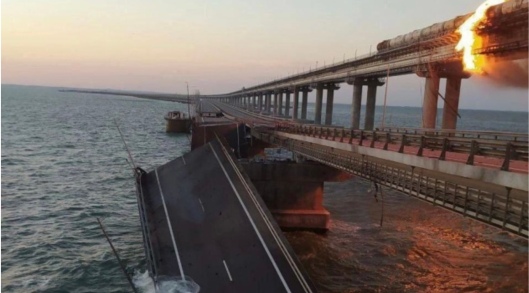