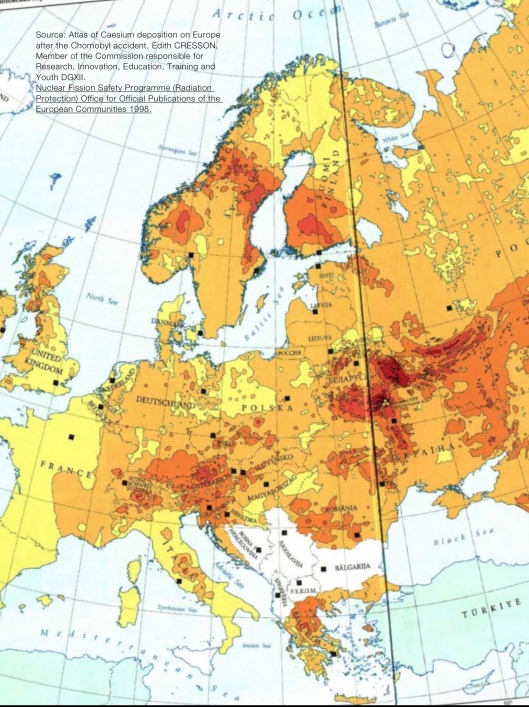 The world, and especially Europe, should have stopped Russia from taking over this nuclear power station by any means necessary. Air cover should have been used, since it is Ukrainian air space. Once Russia was allowed to take it, it was too late.

The Zaporizhzhya Nuclear power station needs to be handed to the international IAEA. If Russia will not do so, then they need to be booted out of the UN and IAEA. Rosatom must be sanctioned. They are the worst, and most active, nuclear proliferators, as well.

“instead of sanctioning Rosatom, the Biden administration appears to be rolling out the red carpet… It remains unclear why Secretary of State Antony Blinken thought it would be prudent to issue a visa for a Rosatom official to testify to an international audience on best practices of the “safe” and “secure” use of nuclear energy when Rosatom is guilty of participating in one of the greatest breaches of nuclear safety since the Chernobyl disaster.” https://www.washingtonexaminer.com/restoring-america/courage-strength-optimism/why-is-the-biden-administration-rolling-out-the-red-carpet-for-russias-nuclear-industry It actually appears clear: Blinken’s stepfather, Sam Pisar, was a Russophile who did a lot of business with Russia during the Cold War. Blinken seems to be a foreign agent. Blinken needs to be investigated and impeached, asap

The focus and fears remain oriented to nuclear weapons, rather than nuclear power stations. However, depending on its seriousness, a nuclear disaster could be worse, and more long-lasting, than the use of a small tactical nuclear weapon. This hps article explains, in part: https://hps.org/publicinformation/ate/q12228.html However, it gives false assurances on Chernobyl. Excessive ionizing radiation can lead to life-shortening cancers without being immediately fatal. It depends on the dosage and on luck,

The model of an accident, below, appears to be with the wind blowing from the northeast. Winds from the west, northwest and southwest would badly impact Russia.
From: https://t.me/s/energoatom_ua

“In the event of an accident at the Zaporizhzhya NPP, the consequences threaten the whole world

Millions of people, countries, lands and waters will be under radioactive impact, according to the head of the department of mathematical modeling of the environment at the Institute of Problems of Mathematical Machines and Systems of the National Academy of Sciences of Ukraine, Ivan Kovalets.

“There are emissions calculations for one of these scenarios. This scenario assumes competent actions of the personnel during the accident to minimize the consequences. That is, it is not an “apocalyptic” scenario, but it is a very severe accident of the maximum category 7 on the INES scale. When the emission estimates are made, everything depends on the meteorological conditions, and we model the atmospheric distribution,” he explained.

According to the scientist, the consequences, in particular, will be influenced by meteorological conditions, which change every day, and he added that the consequences of the explosion at the Zaporizhia NPP may be felt in the south of Ukraine, in Crimea, Romania and Bulgaria. There will also be radioactive contamination of the Black Sea”
https://t.me/s/energoatom_ua

See greenpeace map here showing the proximity of the reactors to the fighting. Also additional information and links: https://www.greenpeace.org/international/campaign/russian-military-threat-ukraine-nuclear-reactors-facilities/

From: https://t.me/s/energoatom_ua
“As of 08:00 on August 10, 2022, the Zaporizhzhia NPP operates with the risk of violating radiation and fire safety standards

Periodic shelling of the ZNPP by Russian troops with anti-aircraft missiles over the past few days has caused a serious risk to the safe operation of the plant.

As a result of shelling, the nitrogen-oxygen station and the combined auxiliary building were seriously damaged. There are still risks of hydrogen leakage and sputtering of radioactive substances, and the fire hazard is also high.

In addition, three radiation monitoring sensors around the SSVYAP ZANP site were damaged.

The Ukrainian staff of the station continues to work and make every effort to ensure nuclear and radiation safety, as well as eliminate the consequences of damage.

The nuclear power plant is still occupied and controlled by the Russian military. Given that it is impossible to predict the actions of invaders, the threat to the station’s physical security remains.

Currently, the Zaporizhzhya NPP continues to operate and produce electricity for the needs of the energy system of Ukraine.

Ukraine calls on the world community to urgently take measures to force Russia to release the ZaNPP and transfer the power plant to the control of Ukraine for the sake of the security of the whole world“. https://t.me/s/energoatom_ua
Handing it back to Ukraine is good, but successfully handing it to the IAEA is more likely.

Hopefully the Rosatom employees aren’t as insane as it sounds. They should have some level of appropriate education, unlike the Russian soldiers:
“Russian troops plan to reconnect the Zaporizhzhya NPP to Crimea – Head of Energoatom August 9 2022 (ca 10 pm in Kyiv) https://www.radiosvoboda.org/
The occupiers of the Zaporizhzhia nuclear power plant have begun the process of reconnecting it to Crimea – Petro Kotin, the head of the state-owned Energoatom company, informed the Russian Federation on August 9 on the air of a national telethon.

“Rosatom personnel handed the station a special program for reconnection of the ZNPP to Crimea. The prerequisite for this program is severe damage to the ZNPP communication line with the energy system of Ukraine. This is exactly what we have been seeing for the past three days. Three lines were damaged during this period. Currently, the ZNPP, unfortunately, works only with output on one line,” he said.

This, according to Kotin, becomes a danger for the station itself, since shelling can cause the disconnection of this last line as well. Therefore, the station will remain without external power supply.

The head of Energoatom pointed out that the station has 20 diesel generators that will cool the reactors in case of an emergency.

“In order to switch the ZNPP to Crimea, they need to completely extinguish the plant, the entire south of Ukraine – the occupied parts of the Kherson and Zaporizhzhia regions. This is written in the program. After that, they start re-energizing the region from the substation in Dzhankova, gradually reaching Kakhovskaya, and from Kakhovskaya re-energizing the ZNPP. After that, it will be impossible to connect this station to the Ukrainian power system, it will remain on the Russian frequency,” he added.

Kotin called the most dangerous period of complete shutdown, when all diesel generators are working, because damage to this equipment can cause the reactor core to melt.

The Ukrainian authorities accused Russian troops of shelling the territory of the Zaporizhzhya NPP on August 5, 6, and 7.

The head of the International Atomic Energy Agency (IAEA), Rafael Mariano Grossi, said on August 6 that the shelling of the nuclear power plant “highlighted the very real risk of a nuclear disaster.”

Russian troops are based on the territory of the nuclear power plant and, as the center says, a nuclear facility used by the Russian army as a cover.

Instead, the Russian side accused the Ukrainian military of shelling the nuclear power plant.

Since March 4, the Zaporizhia NPP has been captured by Russian troops. Energodar, a satellite city of the ZNPP, is also under occupation. https://www.radiosvoboda.org/a/news-rosiiski-viiska-pidkliuchennia-zaes-do-krymu/31980876.html

According to Ukraine, Saturday’s event – which occurred a day after previous shelling damaged the plant’s external power supply system – injured a Ukrainian security guard at the ZNPP. It also damaged walls, a roof and windows in the area of the spent fuel storage facility, as well as communication cables that are part of its radiation control system, with a possible impact on the functioning of three radiation detection sensors, Ukraine told the IAEA. But there was no visible damage to the containers with spent nuclear fuel or to the protective perimeter of the facility.

Based on the information provided by Ukraine, IAEA experts assessed that there was no immediate threat to nuclear safety as a result of Saturday’s incident, Director General Grossi said.

However, the shelling on Friday and Saturday at the ZNPP breached virtually all the seven indispensable nuclear safety and security pillars that the Director General outlined at the beginning of the conflict, including those related to a nuclear power plant’s physical integrity, functioning safety and security systems, staff and external power supplies.

Saturday evening’s incident showed how the conflict had also compromised nuclear safety and security pillars related to Emergency Preparedness and Response arrangements as well as communications, Director General Grossi said. Ukraine informed the IAEA after the incident that plant staff had restricted access to the ZNPP’s on-site crisis centre, potentially impacting response activities in case of an emergency even if access to an off-site centre remained possible. In addition, the Ukrainian regulator said its communications with ZNPP were “very limited and fragmentary”.

The Ukrainian regulator also informed the Agency that the plant continues to have limited availability of off-site power.

The IAEA is in close contact with the Ukrainian authorities and continues to monitor the nuclear safety and security situation, he said.“ https://www.iaea.org/newscenter/pressreleases/update-89-iaea-director-general-statement-on-situation-in-ukraine

EU:
“STATEMENT8 August 2022
Statement by Commissioner Simson on the situation at the Zaporizhzhia Nuclear Power Plant
I wish to express my strong condemnation of the latest shelling at and around the Zaporizhzhia Nuclear Power Plant, Europe’s largest nuclear power plant, which has caused significant damage to infrastructure, including near the dry storage of spent nuclear fuel within the nuclear power plant perimeter.

This reckless behaviour by the Russian military forces poses a great danger to the plant’s safe operation increasing significantly the risk of a nuclear accident and must not happen again.

While information obtained from EU’s radioactivity monitoring systems as well as international sources does not indicate any increase of radioactivity in Ukraine or EU nor any immediate radiation threat, military activities around nuclear power plants are unacceptably dangerous. The EU calls on Russia to ensure that repair works can be rapidly implemented and that the safety of the workers involved in them and in the operation of the Zaporizhzhia Nuclear Power Plant is guaranteed.

The EU reaffirms that the deployment of Russian military personnel and weaponry at the Zaporizhzhia nuclear facility is an open violation of all internationally agreed safety, security and safeguards provisions. The Russian military and other personnel must withdraw from the site without delay so that the Ukrainian operator can operate the plant safely and as an integral part of Ukraine’s energy system and electricity grid.  Ukrainian nuclear safety authorities must be allowed to exercise fully their regulatory control, including access to the site in view of carrying out their duties in accordance with international conventions and IAEA safety standards.

The Commission services are in close contact with both the IAEA and the Ukrainian authorities to assess risks stemming from recent incidents and support remedial actions. They will continue to monitor closely the situation with regard to the nuclear safety in Zaporizhzhia and more broadly in Ukraine.

The EU is the largest provider of material assistance to Ukraine totalling over 400 million EUR so far, notably for crucial chemical, biological, radiological and nuclear (CBRN) protection equipment. The Commission will also continue to provide its assistance to the Chornobyl Nuclear Power Plant and the Exclusion Zone through the European Instrument for International Nuclear Safety Cooperation (INSC) to alleviate the damage caused by the Russian troops, which up to now has been estimated to about 80 million EUR additional assistance.

Russia must bear full responsibility in front of the international community for its aggression to Ukraine and for its unlawful and reckless actions, including on nuclear safety”. https://ec.europa.eu/commission/commissioners/2019-2024/simson/announcements/statement-commissioner-simson-situation-zaporizhzhia-nuclear-power-plant_en

“Why is the Biden Administration Rolling Out the Red Carpet for Russia’s Nuclear Industry?” Washington Examiner – Tuesday, August 9, 2022 by Gabriel Noronha https://jinsa.org/why-biden-admin-rolling-out-red-carpet-for-russia-nuclear-industry/
https://www.washingtonexaminer.com/restoring-america/courage-strength-optimism/why-is-the-biden-administration-rolling-out-the-red-carpet-for-russias-nuclear-industry