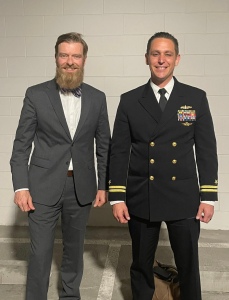 Photo of Attorney Younts and LT Moseley after the Navy Board ruling, May 20, 2022.

On May 20, 2022, a Board composed of three Navy officers found that our client LT Bill Moseley did not commit misconduct by refusing the COVID 19 injection and found unanimously that LT Moseley should be retained in the United States Navy. Attorney Younts represented LT Moseley at the administrative hearing and successfully argued that the order for military members to receive the experimental COVID 19 injection was not a lawful order. In particular, Attorney Younts successfully demonstrated that the military has not made the FDA approved version of the vaccine available to military members.

LT Moseley opposes the vaccine for religious reasons and could have submitted a religious accommodation request, however when he learned that the Navy and the other services intended to implement a blanket denial policy, he began to prayerfully consider other options. After consulting with legal and medical experts, he became convinced that as an officer he had an obligation to take a stand against the unlawful order and be a voice for thousands of enlisted Sailors. LT Moseley risked his twenty-two-year career and his military retirement because of his faith and his commitment to his oath of office as a military leader.

Although, this is only one case of thousands and we have many more clients facing prosecution by the military, we are encouraged that the truth was revealed in this Board, and we hope this ground-breaking case sends a strong message to the Department of Defense.

The point of contact for this release is attorney R. Davis Younts. He can be reached at 833-739-5291 or davis@yountslaw.com.

Other cases-posts discussing the illegal nature of these mandates:
“We also allege the DOD is illegally mandating emergency use vaccines when they only have the authority to mandate “approved” vaccines. We have informed the Court that the current FDA approved vaccines are unavailable in the United States. Additionally, we are asking the court to reject the FDA’s “approval” of the Pfizer-BioNTech vaccine, in that it was issued without proper testing and made with the improper purpose to mandate COVID-19 vaccines for nearly all Americans.” See: “Plaintiffs’ opposition to defendants’ motion To Dismiss” PRESS RELEASE February 7, 2022 https://defendingtherepublic.org/coker-v-austin/

The Pfizer vaccine was not approved-licensed by the FDA, apart from Emergency Use Authorization. Rather, the European BioNTech mRNA vaccine, which is “legally distinct with certain differences” from Pfizer vaccine, was approved, but with conditions. There are many studies that the FDA is requiring them to complete, which won’t be finished until 2027. https://miningawareness.wordpress.com/2021/08/25/fda-only-renewed-emergency-use-authorization-for-pfizer-approval-was-for-biontechs-comirnaty-with-years-of-additional-safety-studies-required-thru-2027/

Pfizer-BioNTech/Comirnaty Vaccine Info Fact Sheet at FDA Website States that Receiving the Vaccine is a Choice under the EUA; Pfizer is Still Under the EUA (as is Moderna)

Defending The Republic Sues DOD, FDA & Others on Behalf of US Military Service Members who Decline Vaccination

FDA Only Renewed Emergency Use Authorization for Pfizer; Approval was for BioNTech’s Comirnaty with Years of Additional Safety Studies Required (Thru 2027)