“Three experts have now resigned from a Food and Drug Administration advisory committee after the agency approved an Alzheimer’s drug called Aduhelm against the wishes of nearly every member on the panel.” https://www.npr.org/2021/06/11/1005567149/3-experts-have-resigned-from-an-fda-committee-over-alzheimers-drug-approval It may be four, because there are four vacancies listed: https://www.fda.gov/advisory-committees/peripheral-and-central-nervous-system-drugs-advisory-committee/peripheral-and-central-nervous-system-drugs-advisory-committee-roster

“For both eteplirsen and aducanumab, the decisions by FDA administrators to ignore the Advisory Committee’s clear recommendations led to their approval of two highly problematic drugs that offered little evidence that they would meaningfully benefit patients suffering from these devastating conditions. This will undermine the care of these patients, public trust in the FDA, the pursuit of useful therapeutic innovation, and the affordability of the health care system.”

“With eteplirsen, the AdComm and FDA’s own scientific staff reported that there was no convincing evidence that the drug worked; both groups were overruled by FDA leadership, which approved the drug based on considerations (including concerns about the sponsor’s finances) that were not part of the Advisory Committee’s discussions.

This week, the aducanumab decision by FDA administrators was probably the worst drug approval decision in recent US history. At the last minute the agency switched its review to the Accelerated Approval pathway based on the debatable premise that the drug’s effect on the brain amyloid was likely to help patients with Alzheimer’s disease. But, this pivotal question was not discussed at the Advisory Committee meeting and its premise was specifically excluded from discussion, as the FDA said “We’re not using the myeloid as a surrogate for efficacy.” At our public meeting, concerns about trial data from one of the FDA’s own reviewers were not given adequate time for discussion, and some of the questions FDA asked the committee were worded in a way that seemed slanted to yield responses that would favor the drug’s approval.

“I believed in the value of Advisory Committees to provide a way for outside experts to provide science-based guidance to the agency on its drug approval decisions. But after my experience on this Advisory Committee for both the eteplirsen and now the aducanumab discussions, it is clear to me that the FDA is not presently capable of adequately integrating the Committee’s scientific recommendations into its approval decisions.” (Retyped, to facilitate reading, from the original letter found below and here: https://archive.ph/uPSXj There could be a typo. We make no guarantees. The original is always the original.)

The original letter is here: 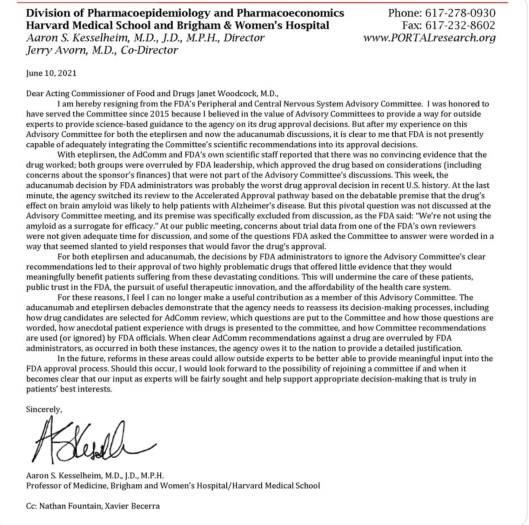 IS BIDEN USING THIS DRUG? THAT MIGHT PROVIDE A CLUE AS TO ITS EFFECTIVENESS.
After reading the letter, now see FDA’s blah, blah, blah:
“FDA Grants Accelerated Approval for Alzheimer’s Drug
For Immediate Release:
June 07, 2021

Today, the U.S. Food and Drug Administration approved Aduhelm (aducanumab) for the treatment of Alzheimer’s, a debilitating disease affecting 6.2 million Americans. Aduhelm was approved using the accelerated approval pathway, which can be used for a drug for a serious or life-threatening illness that provides a meaningful therapeutic advantage over existing treatments.

Accelerated approval can be based on the drug’s effect on a surrogate endpoint that is reasonably likely to predict a clinical benefit to patients, with a required post-approval trial to verify that the drug provides the expected clinical benefit.

“Alzheimer’s disease is a devastating illness that can have a profound impact on the lives of people diagnosed with the disease as well as their loved ones,” said Patrizia Cavazzoni, M.D., director of the FDA’s Center for Drug Evaluation and Research. “Currently available therapies only treat symptoms of the disease; this treatment option is the first therapy to target and affect the underlying disease process of Alzheimer’s. As we have learned from the fight against cancer, the accelerated approval pathway can bring therapies to patients faster while spurring more research and innovation.”

Alzheimer’s is an irreversible, progressive brain disorder that slowly destroys memory and thinking skills, and eventually, the ability to carry out simple tasks.

While the specific causes of Alzheimer’s disease are not fully known, it is characterized by changes in the brain—including amyloid plaques and neurofibrillary, or tau, tangles—that result in loss of neurons and their connections. These changes affect a person’s ability to remember and think.
Aduhelm represents a first-of-its-kind treatment approved for Alzheimer’s disease. It is the first new treatment approved for Alzheimer’s since 2003 and is the first therapy that targets the fundamental pathophysiology of the disease.

Researchers evaluated Aduhelm’s efficacy in three separate studies representing a total of 3,482 patients. The studies consisted of double-blind, randomized, placebo-controlled dose-ranging studies in patients with Alzheimer’s disease. Patients receiving the treatment had significant dose-and time-dependent reduction of amyloid beta plaque, while patients in the control arm of the studies had no reduction of amyloid beta plaque.

The prescribing information for Aduhelm includes a warning for amyloid-related imaging abnormalities (ARIA), which most commonly presents as temporary swelling in areas of the brain that usually resolves over time and does not cause symptoms, though some people may have symptoms such as headache, confusion, dizziness, vision changes, or nausea. Another warning for Aduhelm is for a risk of hypersensitivity reactions, including angioedema and urticaria. The most common side effects of Aduhelm were ARIA, headache, fall, diarrhea, and confusion/delirium/altered mental status/disorientation.

Under the accelerated approval provisions, which provide patients suffering from the disease earlier access to the treatment, the FDA is requiring the company, Biogen, to conduct a new randomized, controlled clinical trial to verify the drug’s clinical benefit. If the trial fails to verify clinical benefit, the FDA may initiate proceedings to withdraw approval of the drug.

Aduhelm was granted Fast Track designation, which seeks to expedite the development and review of drugs that are intended to treat serious conditions where initial evidence showed the potential to address an unmet medical need.
Aduhelm is made by Biogen of Cambridge, Massachusetts”. https://www.fda.gov/news-events/press-announcements/fda-grants-accelerated-approval-alzheimers-drug