Biden’s Secretary of State, Antony J. Blinken (b. 1962), was a director of UK “The International Centre for Missing and Exploited Children”-“Parents and Abducted Children Together”, while his stepfather, Samuel Pisar (1929-2015), appears in convicted pedophile, Jeff Epstein’s (1953-2019), “Black Book”. Additionally, Samuel Pisar was a lawyer and friend of Ghislaine Maxwell’s (b. 1962) father, Robert Maxwell (1923-1991). And, according to at least one source, Pisar worked as an intermediary between Epstein and at least one law office in France. Now “The International Centre for Missing and Exploited Children” is called “Action Against Abduction, LTD” 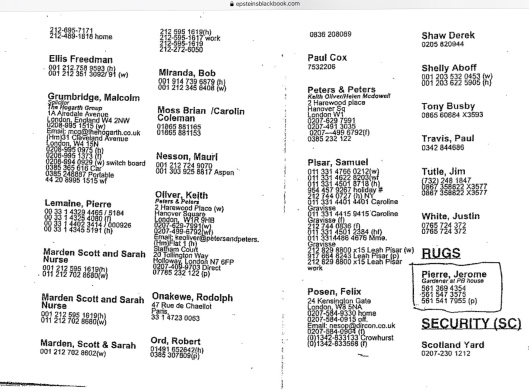 Blinken was a director of UK registered “THE INTERNATIONAL CENTRE FOR MISSING AND EXPLOITED CHILDREN” (which changed its name to “PARENTS AND ABDUCTED CHILDREN TOGETHER” in 08 Oct 2001) from 30 March 2001 until he resigned in 25 September 2002. His occupation is listed as “writer”. At the time Blinken was 29-30 and apparently unmarried. Blinken married his wife sometime in 2002 and reportedly has two children now.

The photo of Prince Andrew and Virginia Giuffre is March 12, 2001.

Blinken’s stepfather, Samuel Pisar, was Robert Maxwell’s lawyer and friend. Robert Maxwell was found dead in late 1991. The FBI suspected from the 1950s that Robert Maxwell was a KGB agent. However, it is now believed that he worked for Mossad or other Israeli Intelligence. The truth remains unknown. Ghislaine Maxwell was connected to Epstein as early as 1991. Some have said since the 1980s. Pisar played the role of intermediary between Epstein and the law office that Epstein used in France (Berlioz), according to Mr. Stéphane Coulaux, formerly of Berlioz, as reported in Le Parisien (13 Aug 2019). Pisar also appears in Epstein’s “black book” which dates from ca 2005 (and earlier). What does this suggest regarding Samuel Pisar? Or, is he simply a lawyer? After all, Stacey Abrams’ power seems to stem from being a tax lawyer-expert.

The Mail on Sunday reported in 1992: “little is known about Mr Epstein. One outrageous story links him to the CIA and Mossad… the most intriguing rumour is that he was a corporate spy…” See: “Revealed: The Unlikely Romance Between a Business Spy and the Crooked Financier’s Favourite Daughter.” Mail on Sunday, 15/11/1992, https://www.reddit.com/r/Epstein/comments/ch6g3r/the_mystery_of_ghislaine_maxwells_secret_love/

After leaving the Clinton Administration, he was a Senior Fellow at the Center for Strategic and International Studies between 2001 and 2002.

Prior to joining the Clinton Administration, Mr. Blinken practiced law in New York and Paris. He has been a reporter for The New Republic magazine and has written about foreign policy for numerous publications including the New York Times, The New York Times Magazine and Foreign Affairs. He is the author of Ally Versus Ally: America, Europe and the Siberian Pipeline Crisis (Praeger, 1987). He appears frequently on cable and network television on behalf of the Obama administration. Mr. Blinken attended grade school and high school in Paris, France where he received a French Baccalaureat degree with high honors. He is a graduate of Harvard College Magna cum Laude and Columbia Law School” https://2009-2017.state.gov/r/pa/ei/biog/236057.htm Baccalaureat in France is a high school degree. He attended a private bilingual high school – which appears more oriented to English than French.

Blinken “supported the U.S.-led invasion of Iraq in 2003.[2][29] In 2002, Blinken was appointed staff director for the Senate Foreign Relations Committee, a position he served in until 2008.[26] Blinken assisted then-Senator Joe Biden, Chair of the Senate Foreign Relations Committee, in formulating Biden’s support for the U.S. invasion of Iraq, with Blinken characterizing the vote to invade Iraq as “a vote for tough diplomacy”.[30]” https://en.wikipedia.org/wiki/Antony_Blinken

The age of consent in the UK is 16 years old, whereas in Florida, DC, and some other states it is 18. It is 17 in New York State: https://en.wikipedia.org/wiki/Age_of_consent_reform_in_the_United_Kingdom