This will force a mini-hearing regarding election irregularities in the US Congress. US House vote for Presidential electors is by delegation, so each state gets a vote.
“Sen. Hawley Will Object During Electoral College Certification Process On Jan 6
Wednesday, December 30, 2020
Today U.S. Senator Josh Hawley (R-Mo.) announced he will object during the Electoral College certification process on January 6, 2021. Senator Hawley will object to highlight the failure of some states, including notably Pennsylvania, to follow their own election laws as well as the unprecedented interference of Big Tech monopolies in the election. He will call for Congress to launch a full investigation of potential fraud and election irregularities and enact election integrity measures.

Democrats have previously objected during the certification process for the 2004 and 2016 Presidential elections.

Senator Hawley said, “Following both the 2004 and 2016 elections, Democrats in Congress objected during the certification of electoral votes in order to raise concerns about election integrity. They were praised by Democratic leadership and the media when they did. And they were entitled to do so. But now those of us concerned about the integrity of this election are entitled to do the same.

“I cannot vote to certify the electoral college results on January 6 without raising the fact that some states, particularly Pennsylvania, failed to follow their own state election laws. And I cannot vote to certify without pointing out the unprecedented effort of mega corporations, including Facebook and Twitter, to interfere in this election, in support of Joe Biden. At the very least, Congress should investigate allegations of voter fraud and adopt measures to secure the integrity of our elections. But Congress has so far failed to act.

“For these reasons, I will follow the same practice Democrat members of Congress have in years past and object during the certification process on January 6 to raise these critical issues.”

Stephanie Tubs-Jones Said, “I Raise This Objection Because I Am Convinced That We As A Body Must Conduct A Formal And Legitimate Debate About Election Irregularities.” (C-SPAN, 1/6/05, 3:10-3:20)

Nancy Pelosi Praised The 2005 Objections, Saying Democrats Were “Speaking Up For Their Aggrieved Constituents” During “Their Only Opportunity To Have This Debate While The Country Is Listening”

In 2017, At Least Seven House Democrats Sought To Object To Electoral Votes In Favor Of President Trump:

Please contact your members of Congress and let them know that you want them to stand with US Reprentative Mo Brooks and US Senator Josh Hawley against election fraud, and to oppose the slates of electors for states with voting irregularites on January 6, 2021. A minimum of one US Representative and one US Senator is needed, but the more the better. The US House vote is by state delegation, not by member, with one vote per state delegation. How to contact your members of Congress: https://www.usa.gov/elected-officials/

Mo Brooks has stated that “on January 6, 2021, provided the required one senator joins me, I will object to and vote to reject electoral college submissions of Nevada, Georgia, Wisconsin, and Pennsylvania and all other states whose election systems are so badly flawed as to render their vote submissions unreliable, untrustworthy, and unworthy of acceptance.” https://brooks.house.gov/media-center/news-releases/congressman-mo-brooks-floor-speech-quotes-democrat-election-theft-expert 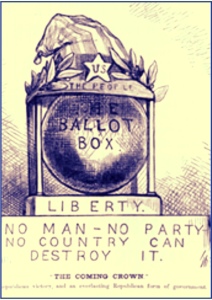