China’s Belt and Road initiative is ostensibly an infrastructure project. However, it’s actually a dependency project, if the countries are unable to pay back the loans. As Mitch McConnell’s wife, Elaine Chao, became head of the US Dept. of Transportation, her sister, Angela Chao, became a member of the Board of the Chinese government-owned Bank of China. The US is one of the only countries which hasn’t opted into either the Belt and Road initiative, or the related Asian Infrastructure Investment Bank. Joining the Belt and Road/AIIB seems to have been the plan of whoever proposed Elaine Chao to be head of the US Department of Transportation, however.

This map is from ca 2017. Canada, and other additional countries, have since joined. 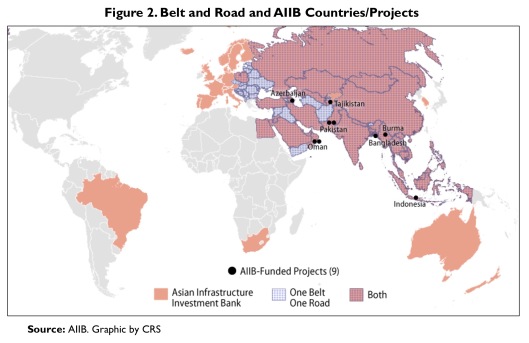 “Over the past several years, President Xi has spoken of building a “community of common destiny,” first in the Asia-Pacific region and then throughout the globe.” See, ”Asian Infrastructure Investment Bank (AIIB)” Martin A. Weiss Specialist in International Trade and Finance, February 3, 2017, Congressional Research Service: https://fas.org/sgp/crs/row/R44754.pdf

Senator Mitch McConnell reportedly asked US Congressional Republicans not to contest Biden’s alleged win on Jan. 6: https://nypost.com/2020/12/15/mitch-mcconnell-congratulates-biden-harris-on-election-win McConnell apparently prefers “Beijing Biden”. Congressman Swalwell isn’t the only person in the US Congress who may have slept with a Chinese spy. Mitch could be sleeping with one.

“On March 23, 2017, the AIIB announced its acceptance of Canada’s application, which will make our country the AIIB’s first North American member.” https://www.canada.ca/en/department-finance/news/2017/03/backgrounder_canadajoinstheasianinfrastructureinvestmentbank.html

Mitch McConnell’s wife, Elaine Chao’s family company is the Foremost Group shipping company: https://en.wikipedia.org/wiki/Foremost_Group. Since 2018, her sister, Angela, leads the group. In 2015, there was an article: “China-Taiwan ship finance deal funds Foremost newbuilds” by Nick Blenkey, October 22, 2015, and a picture of “Chao family members present at signing of deal” including Foremost founder and Chairman Dr James S.C. Chao, Deputy Chairman Angela Chao and Elaine Chao. China’s Export-Import bank helped fund ships for Foremost. The picture and the text show that Mitch’s wife, Elaine Chao, is close to her family business and China: https://archive.vn/A7TYv There is, of course, a maritime component to China’s Belt and Road initiative, and they control ports in places one wouldn’t expect – like Italy and Israel.

The company, China State Shipbuilding Corporation, CSSC, is now listed as a US National Security Threat, as of ca December 9th: https://www.state.gov/u-s-investors-are-funding-malign-prc-companies-on-major-indices Maybe Mitch and Elaine don’t like that?

Her sister, Angela Chao, is the only person listed as a non-Chinese citizen on the Bank of China board in UK filings, where she is listed as an American. She was put on the board just before her sister was confirmed as head of the US Dept. of Transportation. https://archive.vn/27v0v Since their father was born in Shanghai, they could have dual citizenship, if China allows dual citizenship-right of return.

“Bank of China USA works to capitalise on growing American interest in Belt and Road investment projects: The US unit of China’s oldest bank is using Belt and Road Initiative projects to tempt potential US lending clients, in part to blunt the impact of a potential trade war” Robert Delaney, 18 Apr, 2018 SCMP https://archive.vn/r2HGr California sent a representative to a Belt and Road forum in 2019.

Mitch McConnell’s father-in-law, James Chao, went to school with the former President of China, Jiang Zemin: “… Ms Chao’s Shanghai-born parents. Her father is James Chao, whose mother was from the Chu family that built a shipping empire in Hong Kong. Mr Chao attended Shanghai’s Jiaotong University with Mr Jiang before working in the prominent China Maritime Trust Limited shipping company, which was founded by Mr Tung’s father, the late Tung Chao-yung, more than 50 years ago and is now known as the Orient Overseas Container Line. The company shifted to Taiwan as the communists seized Shanghai in 1949, and the Chaos and the Chus followed…” See much more at “The Chao ‘connection’”, Wednesday, 16 May, 2001, SCMP https://archive.vn/umWvv

“Jiang Zemin (/dʒiːˈɑːŋ zəˈmɪn/; simplified Chinese: 江泽民; traditional Chinese: 江澤民; pinyin: Jiāng Zémín; born 17 August 1926) is a Chinese politician who served as General Secretary of the Chinese Communist Party from 1989 to 2002, as Chairman of the Central Military Commission of the Communist Party of China from 1989 to 2004, and as President of the People’s Republic of China from 1993 to 2003…” https://en.wikipedia.org/wiki/Jiang_Zemin

Initially the Soviet Union (Russia) worked to build up Communist China, so Jiang Zemin also trained in Moscow:
“Jiang Zemin, born on 17 August 1926, is a native of Yangzhou, Jiangsu Province. He participated in the students’ movement led by underground CPC organizations from 1943 and joined the CPC in April 1946. He graduated from the Electrical Machinery Department of Shanghai Jiaotong University in 1947… He worked as a trainee at the Stalin Automobile Works in Moscow in 1955…” https://maoist.wikia.org/wiki/Jiang_Zemin

What is the Bank of China?
“The Bank of China (Chinese: 中国银行; pinyin: Zhōngguó Yínháng; often abbreviated as 中行 or BOC) is one of the four biggest state-owned commercial banks in China. Bank of China is legally separate from its subsidiary Bank of China (Hong Kong), although they maintain close relations in management and administration and co-operate in several areas including reselling BOC’s insurance and securities services.

It was founded in 1912 by the Republican government to replace the Daqing Bank. It is the second oldest bank in mainland China still in existence (after the Bank of Communications, founded in 1908). From its establishment until 1942, it issued banknotes on behalf of the Government along with the “Big Four” banks of the period: the Farmers Bank of China, Bank of Communications and Central Bank of the Republic of China. Its headquarters are in Xicheng District, Beijing.[3]

As of 31 December 2009, it was the second-largest lender in China overall, and the fifth-largest bank in the world by market capitalization value.[4]

As of end 2017, it was the fourth-largest bank in the world in terms of assets, ranked after the other three Chinese banks.[5] ” CC-BY-SA: https://en.wikipedia.org/wiki/Bank_of_China

“China emerging as a global hub for money laundering operations: Criminals around the world are turning to China to launder their money” By Vaishali Basu Sharma September 18, 2020 https://archive.vn/kHeK6

What is AIIB? BankWatch.org explains:
“Asian Infrastructure Investment Bank (AIIB)
Established in 2015 as one of the financing arms of China’s Belt and Road Initiative, the Beijing-based AIIB aims to boost infrastructure connectivity in Asia and beyond. The newest International Financial Institution pledges to be “lean, clean, and green,” although plunging into controversial mega fossil fuel and hydro projects at the very start. With its operations in the third year, lingering concerns about its minimum oversight and transparency practices remain.” https://bankwatch.org/aiib https://creativecommons.org/licenses/by-sa/4.0/

“One-third of funding by AIIB has gone to India’”, The Hindu
“Out of the $20 billion in loans issued by the Beijing-based Asian Infrastructure Investment Bank (AIIB), about $6 billion has gone to India, the bank’s second-largest shareholder after China, says D.J. Pandian, who, as the lender’s vice-president of Investment Operations, oversees all sovereign and non-sovereign lending in South Asia and Southeast Asia…” https://archive.vn/Ekv3Z

Not only is Kamala Harris’ maternal homeland involved, so too is her father’s home of Jamaica. Jamaica joined China’s Belt and Road.

As can be seen, above, it’s not necessarily Russia or India or China, but all of them. India, China and Russia are all members of the Shanghai Cooperation Organization (SCO).