Last February Edward Thomas Schinzing was charged with what appears to be elder or child mistreatment in combination with multiple assault charges and apparently thought he could destroy records and maybe evidence in the county courthouse.

It is easy to extrapolate who wants to destroy the Federal Courthouse.

Harder to extrapolate why the Democrats and media don’t want the Federal Courthouse protected. And why they call this nonviolent free speech? And why they pretend it is to help black people?

As this makes clear, violence started over a month before Federal courthouse re-enforcements arrived.

He was marching at the front of a Portland protest beside an “I can’t breathe” sign referencing George Floyd.

Any legitimate protest needs to be planned, including a parade permit and know who is in your march. People shouldn’t protest during Covid, however. Any activities require 6 ft plus between people.

Portland PD was put under Federal supervision by Vanita Gupta-Obama-Courts, as was Seattle, and others (Albuquerque, Chicago process started, etc).

“FOR IMMEDIATE RELEASE
Tuesday, July 28, 2020
Portland Man Charged in May 29, 2020 Arson at Justice Center
PORTLAND, Ore.—U.S. Attorney Billy J. Williams announced today that Edward Thomas Schinzing, 32, has been charged by criminal complaint with using fire to maliciously damage or destroy the Justice Center in downtown Portland on May 29, 2020.

Multnomah County and the City of Portland own the Justice Center building located at 1120 SW 3rd Avenue in Portland. The facility houses the Multnomah County Detention Center jail and the Portland Police Bureau headquarters.

According to court documents, Schinzing was marching with a group of protestors when he arrived at the front of the Justice Center shortly before 11:00 p.m. on May 29, 2020. A few minutes later, several people broke windows near the northwest corner of the Justice Center where the Corrections Records Office is located. They subsequently entered the secured office through the broken windows.

Three civilian Multnomah County employees were working inside the Corrections Records Office at the time and fled for safety as the windows were broken. Based on a preliminary review of publicly-available videos from YouTube, Twitter, surveillance cameras, and still photos posted online, about 30 individuals entered the Justice Center through the broken windows. The individuals spray-painted portions of the office; damaged computer and other office equipment, furniture, and interior windows; and started fires.

Among those who entered the Justice Center, Schinzing was identified by a comparison with a jail booking photo and a distinctive tattoo of his last name across his upper back. Schinzing spread a fire that started near the front of the office by lighting additional papers on fire and moving them into a drawer of a separate cubicle.

At about 11:08 p.m., the building’s fire sprinkler system activated and extinguished the fires. At about the same time, law enforcement officers secured that portion of the Justice Center. The Multnomah County Detention Center housed approximately 289 inmates at the time.

Schinzing made his first appearance in federal court today before a U.S. Magistrate Judge and was ordered detained pending further court proceedings. Arson is punishable by up to 20 years in prison with a mandatory minimum sentence of 5 years.

This case is being jointly investigated by the FBI; Bureau of Alcohol, Tobacco, Firearms and Explosives (ATF); U.S. Marshals Service; Portland Police Bureau; Multnomah County Sheriff’s Office; and Multnomah County District Attorney’s Office. It is being prosecuted by the U.S. Attorney’s Office for the District of Oregon
Criminal complaints are only accusations of a crime, and a defendant is presumed innocent unless and until proven guilty.
” 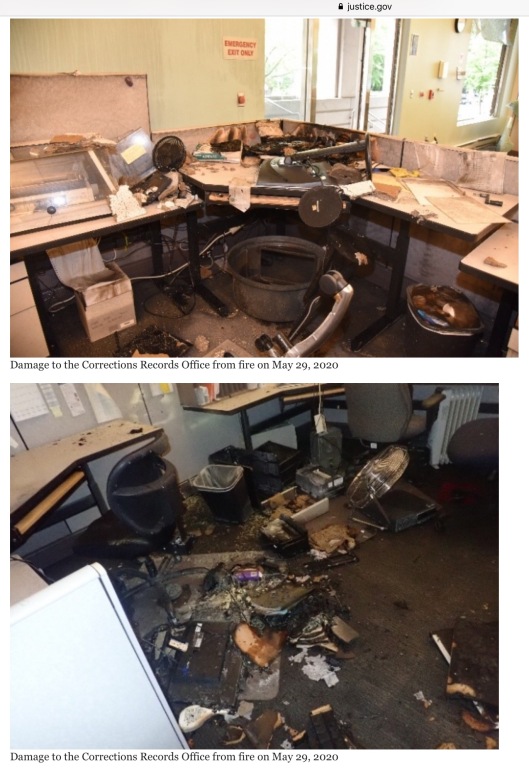