Excerpt from press notice “Intelligence and Security Committee of Parliament publish predecessor’s Russia Report:
“What is clear is that Russian influence in the UK is ‘the new normal’: successive Governments have welcomed the Russian oligarchy with open arms, and there are a lot of Russians with very close links to Putin who are well integrated into the UK business, political and social scene – in ‘Londongrad’ in particular. Yet few, if any, questions have been asked regarding the provenance of their considerable wealth and this ‘open door’ approach provided ideal mechanisms by which illicit finance could be recycled through the London ‘laundromat’. It is not just the oligarchs either – the arrival of Russian money has resulted in a growth industry of ‘enablers’: lawyers, accountants, and estate agents have all played a role, wittingly or unwittingly, and formed a “buffer” of Westerners who are de facto agents of the Russian state.

“There is an obvious inherent tension between the Government’s prosperity agenda and the need to protect national security. To a certain extent, this cannot be untangled and the priority now must be to mitigate the risk, and ensure that where hostile activity is uncovered, the proper tools exist to tackle it at source and to challenge the impunity of Putin-linked elites. It is notable, for example, that a number of Members of the House of Lords have business interests linked to Russia, or work directly for major Russian companies linked to the Russian state – these relationships should be carefully scrutinised, given the potential for the Russian state to exploit them.

“In addition to the Putin-linked elites, the UK is also home to a number of Putin’s critics who have sought sanctuary in the UK fearing politically-motivated charges and harassment, and the events of 4 March 2018 showed the vulnerability of former Russian intelligence officers who have settled in the UK – one of the issues we address in the Classified Annex to our Report.

“It has been clear for some time that Russia under Putin has moved from potential partner to established threat, fundamentally unwilling to adhere to international law – the murder of Alexander Litvinenko in 2006 and the annexation of Crimea in 2014 were stark indicators of this. We therefore question whether the Government took its eye off the ball because of its focus on counter-terrorism: it was the opinion of the Committee that until recently the Government had badly underestimated the response required to the Russian threat –and is still playing catch up. Russia poses a tough intelligence challenge and our intelligence Agencies must have the tools they need to tackle it. In particular, new legislation must be introduced to tackle foreign spies: the Official Secrets Act is not fit for purpose and while this goes unrectified the UK intelligence community’s hands are tied.

“More broadly, we need a continuing international consensus against Russian aggressive action. Effective constraint of nefarious Russian activities in the future will rely on making sure that the price the Russians pay for such interference is sufficiently high: the West is strongest when it acts collectively, and the UK has shown it can lead the international response…”

Press notice in its entirety: 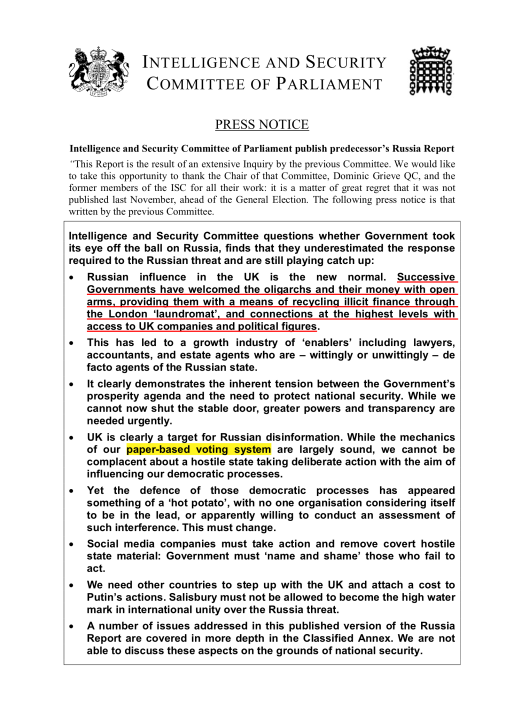 Emphasis our own throughout. See press notice and document originals here: http://isc.independent.gov.uk